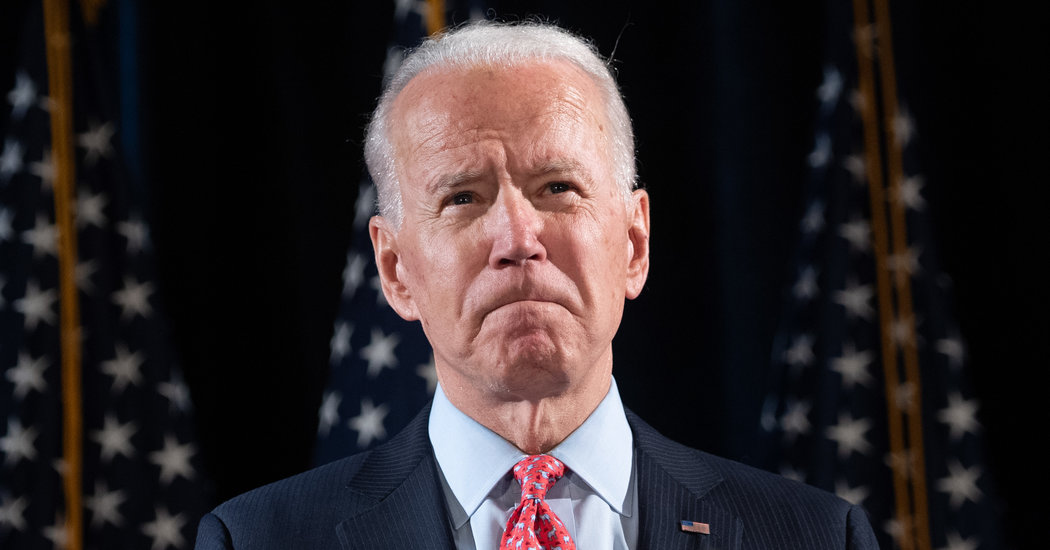 WASHINGTON — Joseph R. Biden Jr. will publicly address an allegation of sexual assault for the first time in an appearance on morning television on Friday, after weeks of silence on the issue that had prompted frustration from Democrats and attacks from Republicans seeking to weaken him for a general election contest against President Trump.

Mr. Biden will discuss the allegation on “Morning Joe” on MSNBC, according to a Twitter post from the network. The decision followed intensive discussions in the Biden campaign about how to more forcefully confront the allegation.

The planned appearance came as scrutiny of the allegation intensified along partisan lines on Capitol Hill on Thursday. Nancy Pelosi, the House speaker and the Democratic Party’s highest-ranking officeholder, expressed support for Mr. Biden’s presidential bid, while Republicans weaponized the accusation to attack congressional Democrats as hypocritical.

The allegation Mr. Biden will address was made by a former aide in his Senate office, Tara Reade, who has said Mr. Biden assaulted her in a Senate building in 1993. Mr. Biden’s campaign has said the accusation is not true, but the former vice president himself had not addressed the issue publicly. His silence has raised questions among some Democrats about the agility of his campaign operation and its ability to navigate what is widely expected to be a heated and deeply divisive presidential campaign this fall.

It has also frustrated some activists and prominent women’s groups who support Mr. Biden’s bid but have pushed his campaign to make a public statement on the allegation to allay concerns on an issue that deeply resonates with their party’s base. Other women in the party privately were irritated that Mr. Biden’s most prominent female supporters have been asked to answer for the allegation in media interviews, while he has remained silent.

The issue did not come up on Thursday during a virtual event Mr. Biden held on Instagram with the soccer star Megan Rapinoe, known for her equal pay advocacy and support of female empowerment. Some of the comments posted during the video urged Ms. Rapinoe to ask about Ms. Reade’s allegation.

By appearing on MSNBC, a network that features left-leaning programming and commentators, Mr. Biden is choosing a relatively comfortable venue for discussing a sensitive topic, one that is likely to reach the Democratic audience he needs to persuade.

As the clamor around the allegations rose on Thursday, Ms. Pelosi sought to calm anxious Democrats during her weekly news conference, calling Mr. Biden a person of “great integrity” and saying that there were no records or additional witnesses corroborating the account.

“I want to remove all doubt in anyone’s mind: I have a great comfort level with the situation as I see it, with all due respect in the world for any woman who comes forward, with all the highest regard for Joe Biden,” Ms. Pelosi told reporters.

“There is a lot of excitement around the idea that women will be heard and be listened to,” she said, and expressed “complete respect” for the #MeToo movement. “There is also due process, and the fact that Joe Biden is Joe Biden.”

Her comments came as Republicans expanded their attacks against Mr. Biden, the party’s presumptive nominee, as well as a broad array of Democratic candidates, calling the party hypocritical on issues of sexual violence, harassment and gender inequality. They also compared the way Democrats have responded to Ms. Reade’s allegation with their response to accusations of sexual assault in 2018 against Brett M. Kavanaugh during his Supreme Court confirmation hearings.

Already, the Trump campaign has signaled that it plans to make the allegation against Mr. Biden a central part of its campaign narrative, accusing him in a memo on Wednesday of “misrepresenting news reports and his own past positions in an effort to put controversies to bed or to level charges against the president.”

Mr. Trump himself waded somewhat tentatively into the conversation on Thursday. Asked by a reporter about Ms. Reade’s allegation, Mr. Trump said: “I think he should respond. It could be false accusations.”

“I know all about false accusations, I’ve been falsely charged numerous times — and there is such a thing,” he added, before pivoting to talk about Justice Kavanaugh, whom he said was “falsely charged.”

Mr. Trump has been accused of sexual assault and misconduct by more than a dozen women, who have described behavior that went far beyond the allegation against Mr. Biden. Mr. Trump has also repeatedly denigrated women over their appearance and intellect.

At a time when congressional Republicans and their strategists fear being dragged down by Mr. Trump’s handling of the coronavirus crisis, top party leaders see an opportunity to move the political conversation toward a focus on Mr. Biden and his long record.

“She’s being a hypocrite,” Mr. McCarthy said. “You can’t say one thing about every other time she has commented about any other accusation, and now say this is different.”

Republicans circulated remarks Ms. Pelosi made after the confirmation of Justice Kavanaugh to underscore their point. In a statement at the time, Ms. Pelosi said that in declining to fully investigate the assault allegations against the Supreme Court nominee, Senate Republicans had failed women across America.

“Senate Republicans chose to send a clear message to all women: Do not speak out, and if you do — do not expect to be heard, believed or respected,” she said at the time.

“During the Kavanaugh hearings, Lucy McBath said, ‘I will not stay silent when women throughout this country are speaking out,’” one email said. “But so far, she’s stayed silent about Tara Reade who has accused Vice President Joe Biden of sexual assault. Will Lucy McBath be a leader and speak out for ALL women even when it doesn’t politically suit her?”

In an interview with Fox News, Senator Mitch McConnell, Republican of Kentucky and the majority leader, said Mr. Biden should release his Senate papers to offer information that could shed light on the alleged assault. Mr. McConnell has not made a similar request of Mr. Trump regarding the allegations he has faced.

“When you run for president of the United States, your life is an open book and I can’t imagine that Vice President Biden is not going to have to participate in releasing all of the information related to the allegations,” Mr. McConnell said. “It’s a very challenging thing to run for president. And I think everyone who’s done that has realized their entire life is opened up to scrutiny. And I think that’s happening to Vice President Biden and they shouldn’t be surprised.”

Mr. Biden’s Senate papers are housed at the University of Delaware but are not open to the public, according to Andrea Boyle Tippett, the university’s director of external relations.

“We are currently curating the collection, a process that we estimate will carry at least into the spring of 2021,” she said in an email. “As the curating process is not complete, the papers are not yet available to the public, and we are not able to identify what documents or files can be found within the collection.”

She confirmed that members of the Biden campaign had gained access to the collection, as reported by Business Insider, but she said that no one from the campaign had looked at the papers since Ms. Reade’s allegations surfaced on March 25.