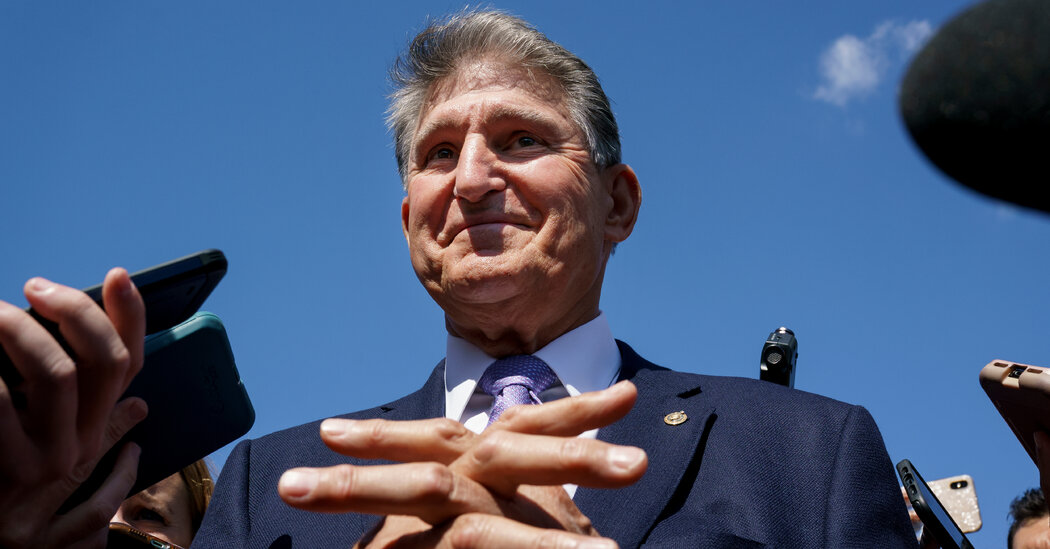 The squabbling over the Build Back Better plan, the ambitious climate change and social spending package that the Democrats need to pass on a party-line vote, has been running hot, with progressives and moderates squaring off, especially in the Senate. On Wednesday, there were even rumblings that Senator Joe Manchin of West Virginia, the chamber’s most conservative Democrat, had devised a plan to strong-arm his colleagues into giving him his way on the deal or else he’d take his toys and leave the party to become an independent. Mr. Manchin denied the report, which appeared in Mother Jones magazine, with salty language and informed reporters, “I have no control over the rumors.”

Progressives have waited for this moment for so long. From their perspective, they are mere inches from realizing their legislative dreams — except that a smattering of moderate obstructionists are threatening to ruin everything. How can the holdouts be so disloyal? Don’t they know what’s at stake?

Democrats on all sides of this debate are well aware of the stakes. But not all of them have the same values or priorities, politics or ideology. Part of the centrists’ foot-dragging may well be cynical and opportunistic, as their critics maintain. (These are, after all, politicians.) But they also have serious concerns about pieces of the spending plan, not to mention its transformational nature. Their more liberal colleagues may consider these concerns misguided, ill-informed or even ridiculous. But this is what happens when a party owes its majority to a Big Tent coalition. Unity is excruciatingly hard to come by.

As for sucking it up and falling in line: This is not the Republican Party, whose animating force, aggressively fueled by former President Donald Trump, is a sour grievous politics centered on owning the libs — while stacking the courts with conservative judges, of course. Republicans unwilling to toe the Trump line are being marginalized or driven out, creating a purer, more unified cult of personality with no real interest in governance. Democrats still want to govern and legislate and get stuff done, which requires hashing out their differences.

Take Mr. Manchin. Can he be a self-important pain in the butt who knows that annoying his leadership and colleagues plays well back home? Fact check: True. Does he have big donors and powerful interest groups in his state that cheer when he stiff-arms the libs on, say, clean energy? True again. But he also has a different ideological take from the bulk of his caucus. How could he not? Once a Democratic stronghold, West Virginia has been trending red for years, and Mr. Trump won the state by nearly 40 percentage points last November.

It’s not as though Mr. Manchin’s conservative outlier status is new. He has made clear during his decade plus in the Senate that he is an anti-abortion, pro-gun, coal-coddling politician who is a big-government skeptic with a horror of what he has dubbed “the entitlement mentality.” His voters have known all this about him for a while now. The more surprising thing may be that he has remained a Democrat.

Plenty of Mr. Manchin’s voters back home support several of the specific policies in the Build Back Better plan, according to an August survey by the progressive think tank and polling firm Data for Progress. Expanding Medicare coverage, investing in long-term care for seniors and people with disabilities and making child care more affordable were the most popular agenda items. Mr. Manchin also supports some of the plan’s measures, as do Senator Kyrsten Sinema and other moderate skeptics. But the proposal is sprawling, and centrist lawmakers find various pieces unsettling.

More broadly, Mr. Manchin and others are skittish about the plan’s price tag (which started at $3.5 trillion) and about expanding the role of government. They are not alone. A new Gallup poll shows that, while the bulk of Democratic voters support the federal government “doing more” to solve the country’s problems, a majority of independents believe that government is “trying to do too many things.”

Republicans, of course, are gearing up to hammer home their political spin — Irresponsible spending! Big Government run amok! Creeping socialism! — and to pick apart individual elements of the plan. This is the uneasy terrain that Democrats who represent not-so-blue areas are navigating.

Proponents of Build Back Better argue that the people of West Virginia, which isn’t exactly an economic powerhouse, stand to benefit materially from the plan. This is likely true. It is also a line of reasoning that Democrats have long used when promoting progressive policies: If only red-staters understood how much better their lives would be under our policies, they would rush to join us. It is an enduring source of frustration to Democrats that the voters in struggling regions that could arguably benefit most from progressive policies — such as the Deep South and big swaths of rural America — so often elect Republicans.

Progressives should continue making their case for Build Back Better to the voters of West Virginia — and beyond — though they need to proceed with caution to avoid coming across as the condescending, elitist know-it-alls that conservatives accuse them of being. And Mr. Manchin and his cohort have a duty to sweat blood in pursuit of a deal that balances the policies their constituents support with broader concerns about the size, shape and role of government.

For all the drama, the negotiations keep grinding along. Mr. Manchin has pledged to huddle up with Senator Bernie Sanders to come up with the framework for a deal this week, while the Senate majority leader, Chuck Schumer, is looking to manage expectations. “What I’ve told our caucus is everyone is going to be disappointed in certain things, but everyone’s going to be glad about certain things,” he said Tuesday.

This is how the sausage gets made, even — perhaps especially — when Democrats have unified control of the government. With a party this diverse, no one should expect any part of the process to be smooth or painless — nor be particularly surprised when members from redder regions aren’t looking to make life easy for their bluer colleagues.