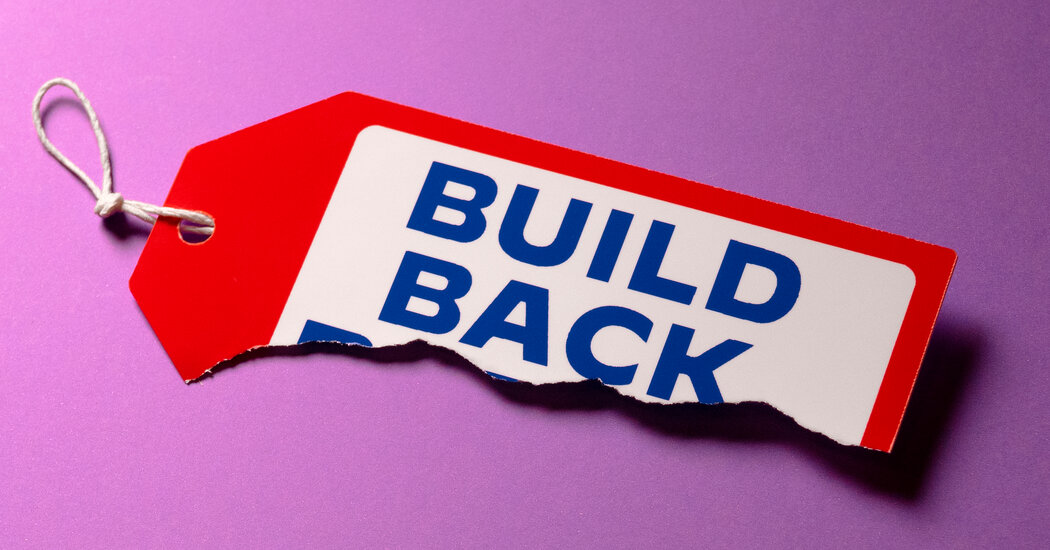 At the beginning of the year, Democrats knew they had a rare opportunity to make transformational change. With control of the White House and Congress, they stuffed ambitious programs meant to address decades of inaction on child care, paid leave, poverty, housing, the climate — and to cover holes in our health care system — into a single package.

Those dreams have run aground on a few holdout Democratic lawmakers. Senators Joe Manchin and Kyrsten Sinema have insisted on skimpy spending numbers, even if the spending is offset by higher revenues. Mr. Manchin is forcing excruciating decisions between Democratic priorities, but he insists that it’s in the name of fiscal responsibility, of not incurring too great a cost for the government.

When President Biden released a sharply pared down framework meant to appease the centrists, Mr. Manchin refused to sign off because he’s worried about “the impact it will have on our national debt, our economy and the American people.” Now Mr. Manchin is signaling that he wants to slow walk his party’s legislative package because of increasing inflation — even though the spending will be doled out over a decade and will have no impact on price increases today, while it will eventually help ease household budget crunches.

What Mr. Manchin fails to understand is that we have been enduring enormous costs from our failure to do these things and will continue to incur them if we don’t do enough to meet this moment. The pain is borne by individual Americans who struggle to flourish and stay healthy. But every single one of us suffers from an enfeebled economy and a poorly functioning society.

Inaction comes with its own price. We pay it in the form of forgone human potential. We pay it in the form of lower productivity and a smaller work force, of an economy failing to function at its full capacity. And we also pay for it in human lives. These are very real consequences. To ignore this side of the ledger and focus solely on how much is being spent is, at the very least, ignorant, and at worst, cruel.

The United States has an exceptionally high childhood poverty rate. By failing to offer parents more support in the early years, we pay a huge penalty. Robust economic research has found that giving children more resources when they’re young results in fewer infant deaths, improved health, longer lives, less interaction with the criminal justice system and higher earnings. Those outcomes are vitally important in each individual child’s life, but they’re also important for everyone — the whole economy reaps the benefit of less spending on medical care and higher tax payments from healthier, more productive people.

The opposite, of course, is also true. If we fail to give children the resources they need to thrive, then we incur the costs through poorer health and reduced potential. Children bear the burden of lower income and shortened lives. Even tinkering with the current expansion of the Child Tax Credit, which right now is sending nearly all parents monthly payments of $300 for children under age 6 and $250 for older ones through the end of the year, quickly exposes more kids to these harms.

Imposing a $60,000 income threshold on those payments going forward, as Mr. Manchin at one point proposed, would take it away from 37.4 million children. Mr. Biden has proposed keeping it as is, but extending it for only one year, threatening our chance to significantly reduce poverty and hardship for good.

Another way to invest in children — and, at the same time, their parents — is to ensure that families can secure and afford high-quality child care and early education. Reams of research have shown that there are huge rewards to be gained for children’s development from robust universal early education, gains that follow them throughout their lives.

Child care also frees parents, and in particular mothers, to work outside the home. Universal preschool in the District of Columbia, introduced in 2009, increased the labor force participation rate for mothers with young children by 10 percentage points. Universal child care in Quebec, begun in 1996, helped the province achieve the highest rate of prime-aged working women in the world. The resulting increase in tax revenue has more than covered the cost of Quebec’s program.

But by and large the United States is paying the price for a failure to invest significant federal money in child care and early education, and we will continue down that road if child care funding is cut back or stripped from the Democrats’ package. Labor force participation for American mothers is 19 percent lower than for similar childless women. As recently as 1990 we led the world in how many women were in our work force, but we’ve since slipped to the bottom of the rankings, and a lack of investment in child care is one of the main culprits.

Another culprit is a lack of guaranteed paid family leave. Mr. Biden originally planned to ensure all workers 12 weeks of pay for a new child, serious illness, military deployment, death in the family or in the case of domestic violence and sexual assault, which would have allowed 18 million people — more than a tenth of the entire civilian labor force — to take paid leave each year.

Ditching this provision from the package, which Mr. Biden did to appease Mr. Manchin, means those millions of people will be faced with either losing income to care for themselves or their families or neglecting that care and continuing to work. Guaranteeing only four weeks, as House leadership has proposed, won’t get postpartum parents or seriously sick spouses terribly far.

The United States now guarantees 12 weeks of unpaid family leave (and that’s just for the 56 percent who qualify). Without guaranteed pay, 7 percent of all employees in 2018 needed to take leave but didn’t, and the majority said it was because they couldn’t afford to. Many of those who did manage to take unpaid leave experienced financial difficulty: More than three-quarters of people who got partial pay or nothing at all cut back on their spending and about 30 percent borrowed money or put off paying bills. Nearly one in five had to go on public assistance.

Paid leave, on the other hand, would not only give people the money they need to survive and stay out of debt; it would also keep them attached to their jobs by allowing them the chance to step away without a financial penalty when life demands it. That’s true not just for new parents who need time to bond with and care for new babies, but also for those whose loved ones suffer a health emergency or a new disability. An estimated six million extra people would stay connected to the labor force if we had paid leave. Without it, we’ll keep hemorrhaging workers.

Some of the people we’re losing are forced to step away to care for disabled or elderly family members. More than 800,000 people are on waiting lists to receive professional home-based care through Medicaid (and that’s just for those who have spent down their assets, or never had enough to begin with, to qualify for the program). Democrats had at first proposed spending $400 billion on home-based care for the disabled and elderly, which would have been enough to clear Medicaid’s wait list.

But Mr. Biden and his legislative allies have now reduced that figure by nearly two-thirds. Without enough federal funding to ensure that Americans can get the professional care at home that they deserve, the responsibility often falls to family members. More than 40 million Americans already provide unpaid care to older relatives, which makes it difficult to work for pay. Children who care for elderly parents stand to lose more than $300,000 over their lifetimes in wages and retirement benefits.

And once again, it’s not just an individual burden. The whole economy loses billions in productivity when people are forced to miss work to take care of their family members.

The aged also deserve to have insurance to care for their entire bodies, including their ears, eyes and teeth. Most rely on Medicare for their health insurance, but it doesn’t cover dental, vision or hearing treatment. If it were expanded to cover those body parts, an estimated 62 million older people would benefit. But Mr. Biden’s framework includes only hearing benefits. Without a full expansion, older Americans who can’t afford private coverage will suffer with rotting teeth and deteriorating sight.

An additional 2.2 million people may be left high and dry if Democrats fail to help those who live in the 12 states that have refused to expand Medicaid. People who qualify neither for the program nor for the subsidies that make Affordable Care Act exchange coverage affordable will continue to face “catastrophic financial burden,” in one study’s terms, when they need unexpected surgery but don’t have insurance. They’ll face higher maternal mortality, more opioid deaths and a greater risk of suicide. As we keep incurring thousands of needless deaths a year, Americans will pay for congressional inaction with their lives.

Democrats originally included enough money for housing to cut homelessness in half within five years. But that funding is now half of what it was. Without enough resources, the approximately 580,000 Americans who have no homes of their own will continue to live with poorer health and lower employment. We’ll all be saddled with the extra costs of trying to keep them healthy and offering them public assistance instead of a stable place to live. Giving them housing, on the other hand, quickly recoups most of the costs through the benefits of improved health and employment.

Half a glass of water is always better than an empty one. But Democrats are at risk of wasting an opportunity to show the country what they can do with a full one by putting their slim majorities to work doing as much as they can to help real people and save real lives. They have the chance to create a healthier, happier, more productive country.

The details of the legislative package are certain to change as negotiations continue. There will be immense pressure for lawmakers to lower their ambitions in the name of fiscal responsibility. But there’s nothing responsible about allowing more children’s potential to be stunted, to keep women from their full economic potential, to let people’s health be harmed and lives cut short. The price of failing to deliver is more than we can afford.

Bryce Covert (@brycecovert) is a journalist who focuses on the economy, with an emphasis on policies that affect workers and families.