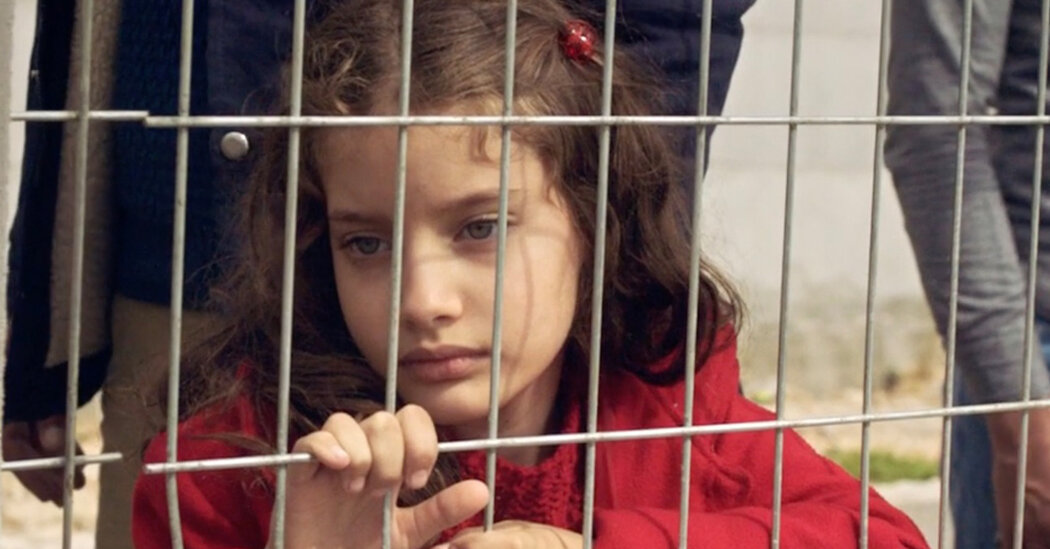 On a recent evening I watched “The Present,” a short film by Farah Nabulsi, a Palestinian filmmaker, which was nominated for an Academy Award for live-action short film. (The winner in the category was “Two Distant Strangers.”) Ms. Nabulsi’s 25-minute film is a powerful, heartbreaking account of the travails of Yusuf, a Palestinian man, and Yasmine, his young daughter, as they traverse an Israeli military checkpoint in the West Bank twice in a single day.

“The Present” establishes its context quickly, opening with images of Palestinian men making their way through a narrow passageway at one of the numerous checkpoints that dot the Israeli-occupied West Bank. Palestinians going to work, visiting family or shopping on the opposite side of a security barrier have to bear this humiliating procedure every day.

Yusuf sets out with Yasmine to buy an anniversary gift for his wife. He is held in a chain-link holding pen. The ostensible reason is that the Israeli guards want to search him and his possessions more thoroughly. Yasmine sits nearby, watching and waiting in silence.

The scene brought back memories of my first visit to the West Bank in 1975, when I crossed the Jordan River and arrived at an Israeli security post. As a student at the American University in Cairo, I was excited about visiting Jerusalem and spending Christmas Eve in Bethlehem. I joined a relatively short line, which moved at a steady and efficient pace.

A few feet away, I could see men, women and children in a much longer line fully enclosed by steel mesh fencing labeled “Palestinians and Arabs.” I saw several subjected to discourtesy and aggressive searches by Israeli soldiers.

While I was distressed by what I saw, I knew that Israel had legitimate security concerns in the aftermath of the 1967 and 1973 wars, worries that had been heightened by attacks on Israeli and Jewish targets by Palestinian terrorist organizations.

Half a century has passed, and the political and security landscape of the Middle East has profoundly changed.

Israel has signed peace treaties with Egypt and Jordan. The Abraham Accords, brokered by the United States last year, have paved the way for four more Arab states — the United Arab Emirates, Bahrain, Sudan and Morocco — to establish diplomatic relations with Israel. Hopefully, more Arab leaders will follow suit as there is no reason and little geostrategic sense in continuing to deny the reality and permanence of the state of Israel. (Unfortunately, the accords did nothing for the Palestinians except to obtain a suspension of Israeli plans to illegally annex the West Bank.)

There also has been significant progress in reducing violence carried out by Palestinians inside and outside the occupied territories. The exception is Hamas, which continues to launch rocket attacks into Israel from the Gaza Strip.

In the West Bank, Palestinian security and intelligence services have worked closely with their Israeli, Arab and Western counterparts to disrupt extremist networks and prevent attacks. These Palestinian agencies have demonstrated an impressive degree of professionalism over the past two decades.

Despite sharply reduced tensions between Israel and the Arab world, the Palestinian people themselves have seen no appreciable progress in their quest to live in their own sovereign state. Political fissures and the ineffective political leadership of the Palestinian Authority have contributed to stymying ambitions for Palestinian nationhood.

But that could change. Legislative elections in May and presidential elections in July in the West Bank and Gaza offer Palestinians an opportunity to elect representatives capable of conducting a more effectual political dialogue within the Palestinian homeland and beyond. Palestinian candidates who do not bear the sclerotic reputations of political incumbents, if elected, would help soften the deep-rooted cynicism that many Israeli officials display toward Palestinian negotiators.

The major hurdle will be to reverse the trend of diminished interest that the Israeli government has shown in pursuing a two-state solution. Israel’s prime minister, Benjamin Netanyahu, has spearheaded relentless expansion of settlements in the West Bank. That expansion has brought along more concrete walls, security barriers and control points, further reducing the spaces where Palestinians can live, graze their flocks, tend their olive groves and vegetable gardens without being challenged by their occupiers.

Unfortunately, during the Trump years, the United States ignored Palestinian interests and aspirations. Mr. Trump moved the American Embassy in Israel to Jerusalem, rejecting the position of all previous U.S. administrations that it would endanger final status negotiations on that contested city. He senselessly severed funding to the Palestinian Authority and ended our contributions to the United Nations for Palestinian refugee assistance.

In a welcome change, the Biden administration has authorized the release of $235 million for humanitarian, economic and development programs supporting Palestinians in the West Bank, Gaza and elsewhere in the region.

The concluding scene of “The Present” shows Yusuf, tired and hobbled with back pain, increasingly angry and on the verge of violence as he attempts to return home with the anniversary gift. His chilling, emotional outburst made me think of the frustration felt by every Palestinian who has to live with the stifling security measures and political oppression attendant to Israel’s military occupation.

It was his little daughter, Yasmine, though, who gave me most pause and concern. She watched her father’s patience, dignity and humanity steadily erode.

I can only imagine the imprint such experiences have on the young girls and boys who live in the West Bank and Gaza Strip. They grow up traumatized by injustice, discrimination and violence. They live with the feeling that their existence is controlled by people who don’t care about their welfare, their safety or their future.

The Biden administration is dealing with a dizzying array of domestic and international problems but the Palestinian quest for statehood deserves the early engagement of his national security team. The United States needs to tell Israeli leaders to cease provocative settlement construction and the sort of oppressive security practices depicted in “The Present.”

A clear signal from President Biden that he expects and is ready to facilitate serious Israeli-Palestinian discussions on a two-state solution would be of great political significance.

John Brennan is a former director of the Central Intelligence Agency.