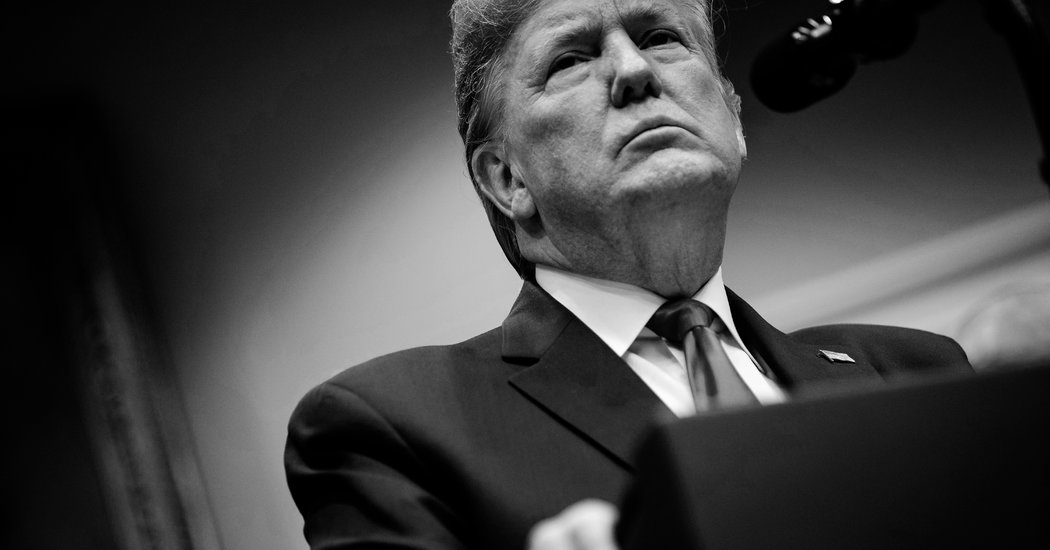 President Trump says that on his watch, Iran will never be allowed to have a nuclear weapon. But if he had wanted to keep that promise, he should have left the 2015 Iran nuclear agreement in place. Instead, he pulled the United States out of the deal and pursued a reckless foreign policy that has put us on a path to armed conflict with Iran.

After Mr. Trump authorized the killing of Maj. Gen. Qassim Suleimani last week, Iran announced it was no longer obligated to follow the agreement, which had reined in its nuclear ambitions, and it launched ballistic missiles at two Iraqi bases housing American troops, to little effect. Adding to the turmoil, the Iraqi Parliament approved a largely symbolic resolution to expel American troops who have been fighting the Islamic State.

Though Mr. Trump has since walked back from the brink of war, I can’t explain the chaos of his presidency as it lurches from crisis to crisis, real or manufactured. The president has said he “doesn’t do exit strategies.” Clearly he doesn’t do strategies, period.

This moment was nothing if not foreseeable the moment Mr. Trump abandoned the 2015 agreement, which was working, and chose instead to isolate us from our allies, narrow our options in the region and slam shut the door to tackling additional issues with Iran through constructive diplomacy.

Now the drone strike that eliminated General Suleimani has almost certainly nailed that door shut. President Trump had the right to jettison an agreement he disliked. But we’re witnessing the consequences of that heedless act in a region that is today significantly more volatile than when his administration began in 2017. Strategies have consequences — and so does the lack of a strategy.

Let’s get one straw man out of the way. General Suleimani was a sworn, unapologetic enemy of the United States, a cagey field marshal who oversaw Iran’s long strategy to extend the country’s influence through sectarian proxies in the region. He won’t be mourned or missed by anyone in the West. Occasionally, when American and Iranian interests aligned, as they did in fighting ISIS, we were the serendipitous beneficiaries of his relationships and levers, as were the Iraqis. But this was a rare exception.

That underscores the tragic irony of Mr. Trump’s decision to abrogate the nuclear agreement: It played into General Suleimani’s hard-line strategy by weakening voices for diplomacy within the Tehran regime. What Iranian diplomat would be empowered by a skeptical supreme leader to explore de-escalation with a country that broke its word on a historic agreement and then, in their words, “martyred” arguably Iran’s second most powerful figure?

Presidents make lonely, difficult decisions about the use of force to protect our interests — usually with the solace of knowing at least that diplomacy had failed. The tragedy of our current plight is that diplomacy was succeeding before it was abandoned.

In 2013, I sat down with Mohammad Javad Zarif, Iran’s foreign minister, for the first meeting between our countries’ top diplomats since the 1979 revolution and hostage crisis. Iran at the time had enough enriched material for eight to 10 nuclear bombs and was two to three months from being able to build one.

Two years later, after intense negotiations, we had an agreement that would be signed by seven nations and endorsed by the United Nations Security Council. Diplomacy had achieved what sanctions alone had not: Iran couldn’t have a nuclear weapon during the life span of the agreement; and if it cheated, the world was resolved to stop it.

What did we turn over to President-elect Trump in 2017? Iran was in compliance with the nuclear agreement. Our allies were united with the United States. There were no missile attacks on United States facilities. No ships were being detained or sabotaged in the Persian Gulf. There were no protesters breaching our embassy in Baghdad. Iraq welcomed our presence fighting ISIS. And Iran would be unable to move toward a nuclear weapon without our knowing it through inspections authorized by the agreement.

None of our allies thought the work was over after the deal was struck. But we had laid a foundation of diplomacy from which other issues might be addressed. In 2016, we defused deep disagreements with Iran over prisoners and averted conflict when American sailors inadvertently entered Iranian waters and were detained by Iranian forces. We were working with allies to deepen sanctions on Iran for its involvement in Yemen, its transfer of weapons to Hezbollah and its actions in Syria, its human rights violations, its threats against Israel and its ballistic missile program.

The nuclear agreement would have been justified if it did nothing more than prevent Iran from building a bomb. But it also created opportunities for the United States to bring pressure on Iran on other issues. President Trump could have built on that, with the luxury of knowing that the urgent, immediate nuclear threat had been put back in the bottle.

We know what Mr. Trump did instead. He put his disdain for anything done by the last administration ahead of his duty to keep the country safe. He alienated our allies. He recklessly rushed ahead without any strategy. We have been left with an incoherent Iran and Iraq policy that has made the region more dangerous and put Americans at greater risk.

After the president ignored Rex Tillerson and James Mattis, his first secretaries of state and defense, who argued that we should stay within the agreement, he found a new secretary of state, Mike Pompeo, who tweets video of Iraqis celebrating the killing of General Suleimani — eerily reminiscent of 2003, when Iraqis were spotted celebrating the overthrow of Saddam Hussein. It was fantasy then and it is fantasy now to believe this bodes well for our relations with Iraq, as Parliament’s vote on American forces underscores.

We are left to ponder another paradox: To assure allies that his decision was not rash, Mr. Trump will have to call on hard information from the very intelligence community he has cheerfully attacked for three years.

Mr. Trump’s foreign policy requires an unreliable regime in Tehran to behave reasonably in order to save Mr. Trump from himself. This is the tragic failure of his abandonment of diplomacy.

We have too often forgotten that the United States should never go to war on a lark, for a lie or a mistake. We have also seen the divisions over Vietnam and Iraq tear at the fabric of life in our country. Yet now, young Americans are again worrying that they might have to die because their political leaders did not exhaust or even explore, but rather abandoned the possibilities of diplomacy.

Our diplomacy should not be defined by bluster, threats and brinkmanship, tweets or temper tantrums, but by a vision for peace and security addressing multiple interests of the region.

John Kerry, a former Democratic senator and candidate for president, was secretary of state from 2013 to 2017.