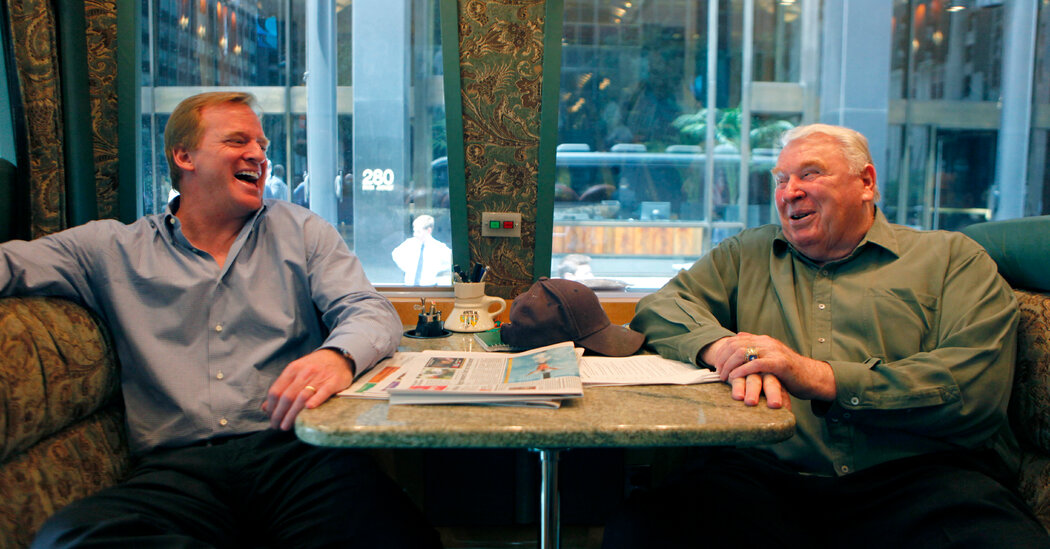 Football fans, broadcasters, video-game enthusiasts and others paid tribute to the legendary coach and football ambassador.

John Madden, the legendary coach, prolific broadcaster and ubiquitous National Football League ambassador, who died on Tuesday at age 85, was remembered for his love of football and his impact on the game.

Tributes from the sports world and beyond poured in.

Jerry Jones, the Dallas Cowboys’ owner, said that no one “lived a more beautiful football life” than Mr. Madden.

“I am not aware of anyone who has made a more meaningful impact on the National Football League than John Madden,” Mr. Jones said in a statement, “and I know of no one who loved the game more.”

Roger Goodell, the N.F.L. commissioner, noted that Mr. Madden was known as the Hall of Fame coach of the Oakland Raiders and a broadcaster who worked for every major network, but said that he was also devoted to his family.

“He was football,” Mr. Goodell said. “He was an incredible sounding board to me and so many others. There will never be another John Madden, and we will forever be indebted to him for all he did to make football and the NFL what it is today.”

Vin Scully, the sportscaster who called Brooklyn and Los Angeles Dodgers games for 67 years, said Mr. Madden was “one of the all-time greats.”

“He showed me the ropes during our brief football partnership,” Mr. Scully wrote. “He was always kind and delightful. He can now join his former partner, Pat Summerall, in calling Super Bowls in heaven.”

The Raiders, now based in Las Vegas, said in a statement that “the Raiders Family is deeply saddened by the passing of the legendary John Madden.”

“Few individuals meant as much to the growth and popularity of professional football as Coach Madden, whose impact on the game both on and off the field was immeasurable,” the Raiders said.

Other N.F.L. teams said on Tuesday night that Mr. Madden’s broadcasts helped bring the game to life for fans listening and watching at home.

The Philadelphia Eagles said on Twitter that Mr. Madden’s words brought the team’s actions “vividly into the homes and hearts of our fans everywhere.” And the Jets said in a statement that “on the field, in the booth or through a console, John Madden’s greatness added so much to the sport.”

Former and current players in the league described the importance of Mr. Madden to their careers.

Andrew Hawkins, a former wide receiver for the Cincinnati Bengals and Cleveland Browns, said on Twitter that “every N.F.L. player grew up dreaming of the day they could see themselves on” the hugely popular video game Madden N.F.L., made by Electronic Arts.

Mr. Hawkins said that Mr. Madden “not only expanded the reach of football, he motivated a generation of athletes, no matter where they grew up, to reach their goals.”

Richard Sherman, who appeared on the cover of the 2014 release of the video game that bore Mr. Madden’s name, thanked the broadcaster for “years of joy and motivation.”

Louis Riddick, a former N.F.L. player and current football analyst on ESPN, described him on Twitter as “transformational” and “generational.”

“These words are too often used inappropriately when talking sports personalities in general,” he said. “It is appropriate to use when talking about John Madden.”

Sports journalists and broadcasters reflected on the role that Mr. Madden played in shaping their lives and careers. John Clark, an NBC sports reporter in Philadelphia, said that, for him, Mr. Madden was “the soundtrack of the NFL.”

“When I started covering the Eagles, and we would go to road games, and see the Madden cruiser out in front of the stadium,” he wrote on Twitter, referring to the vehicle he traveled in to avoid using airplanes, “we knew it was a big one.”

Mr. Madden’s legacy, many said, extended beyond football and broadcasting and reached into the video-gaming world, where generations of gamers grew up on Madden N.F.L., a multibillion-dollar staple for Electronic Arts.

Julian Rignall, a gaming journalist known as Jaz, wrote that Mr. Madden’s video game series “basically enabled me to learn, understand, and ultimately fall in love with the sport of American football.”