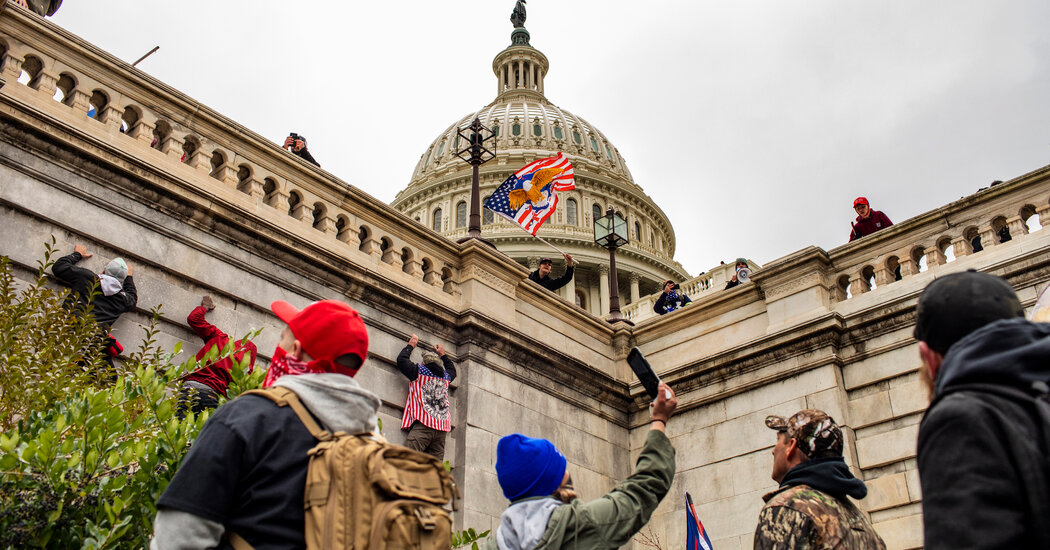 In a hearing on Thursday, a federal judge voiced skepticism about the former president’s claim that hundreds of pages of documents related to the riot should be shielded by executive privilege.

WASHINGTON — A federal judge on Thursday expressed skepticism about Donald J. Trump’s attempt to block from release a wide range of documents related to the Capitol riot, signaling that she might be open to allowing a congressional committee scrutinizing the violence to pore over hundreds of files that the former president wants to keep secret.

At a hearing by video conference, Judge Tanya S. Chutkan of the U.S. District Court for the District of Columbia repeatedly asked pointed questions about the legal basis for Mr. Trump’s claim that at least 770 pages of documents related to the mob attack must be shielded by executive privilege.

Still, the judge also suggested that the House select committee investigating the attack might have overreached, referring to its demand for documents — which potentially amounts to millions of pages — as “very broad” and, at one point, “alarmingly broad.”

The hearing was the first legal skirmish in what is likely to be a prolonged battle in the courts between the panel and Mr. Trump over executive secrecy, congressional prerogatives and how to balance the two in an inquiry into what role a former president played in the events that led to a violent attempt to thwart the peaceful transfer of power.

The panel is looking into the origins of the assault, in which a mob of Mr. Trump’s supporters stormed the Capitol seeking to disrupt Congress’s counting of electoral votes to formalize President Biden’s victory.

During arguments, Douglas N. Letter, the general counsel of the House, said the committee was undertaking “one of the most important” investigations in congressional history.

Mr. Letter said the committee’s requests needed to be broad because it was not only scrutinizing the Capitol attack, but also Mr. Trump’s lies about the election, attempts to undermine faith in American democracy and plans to try to cling to power.

“We want to make sure this never happens again,” Mr. Letter said.

Mr. Clark said that Mr. Trump had a valid claim to keeping the information private.

It was unclear how quickly the judge might rule. Any decision is likely to result in an appeal. Democrats have worried that Mr. Trump is trying to delay their inquiry until Republicans have the chance to retake control of the House in 2022 and end the investigation into the attack.

Mr. Trump last month filed suit against the National Archives seeking to block the disclosure of White House files related to his actions and communications surrounding the Jan. 6 riot. In a 26-page complaint, a lawyer for Mr. Trump said the Constitution gave the former president the right to demand their confidentiality even though he was no longer in office — and even though Mr. Biden has refused to assert executive privilege over them.

The outcome of the lawsuit will carry consequences for how much the panel can uncover about Mr. Trump’s role in the riot, pose thorny questions for the Biden administration and potentially forge new precedents about presidential prerogatives and the separation of powers.

Elizabeth J. Shapiro, a Justice Department lawyer representing the National Archives, noted that the case was a rare instance in which a court had been asked to settle a dispute between a former president and current president over which presidential documents can be made public. But given the subject matter, Ms. Shapiro argued, Mr. Trump clearly had the weaker claim.

“It should be quite clear that the events of Jan. 6 create a congressional duty that outweighs confidentiality in this instance,” she said.

The committee has demanded detailed records about Mr. Trump’s every movement and meeting on the day of the assault. The panel’s requests, sent to the National Archives and Records Administration, include material about any plans formed in the White House or other federal agencies to derail the electoral vote count by Congress.

“Are we once again on: What did the president know, and when did he know it?” Judge Chutkan asked at one point in the hearing, citing a famous line from the Watergate scandal that ended the presidency of Richard M. Nixon.

The Supreme Court has suggested that former presidents wield some residual executive privilege powers. In a 1977 case, the court said Mr. Nixon could make a claim of executive privilege even though he was out of office and his successors, Gerald R. Ford and Jimmy Carter, did not support it. Mr. Nixon lost that case, but the court suggested that he might be able to block the release of some of his papers in the future.

A key issue yet untested. Donald Trump’s power as former president to keep information from his White House secret has become a central issue in the House’s investigation of the Jan. 6 Capitol riot. Amid a new lawsuit by Mr. Trump and a move to hold Stephen K. Bannon in contempt of Congress, here’s a breakdown of executive privilege:

Is Trump’s privilege claim valid? We probably won’t know for a long time, if ever. The constitutional line between a president’s secrecy powers and Congress’s investigative authority is hazy. Historically, such disputes have usually been resolved through compromise, not judicial rulings.

In letters to the National Archives, which is the custodian of White House papers from Mr. Trump’s tenure, Mr. Biden’s top White House lawyer, Dana A. Remus, made clear that the president did not think a claim of executive privilege was legitimate under these circumstances.

“How are visitor logs, which reveal who came to the White House on specific days — how would those be privileged?” she asked.

The judge repeatedly pressed Mr. Clark to name what harm the former president would suffer if she allowed the documents to be turned over to the committee.

“The harm exists to the institution of the presidency,” Mr. Clark said.

“But the current president disagrees,” the judge shot back.

Mr. Trump has asserted executive privilege over 656 pages that include proposed talking points for Kayleigh McEnany, his former press secretary; a handwritten note concerning Jan. 6; a draft text of a presidential speech for the “Save America” rally that preceded the mob attack; and a draft executive order on the topic of election integrity, the filing states.

Mr. Trump has also sought to block the release of 46 pages of records from the files of Mark Meadows, his former chief of staff; Stephen Miller, his former senior adviser; and Patrick F. Philbin, his former deputy counsel. Mr. Trump is objecting to the release of the White House Daily Diary — a record of the president’s movements, phone calls, trips, briefings, meetings and activities — as well as logs showing phone calls to the president and to Vice President Mike Pence concerning Jan. 6.

Finally, Mr. Trump asserted executive privilege over 68 additional pages, including a draft proclamation honoring the Capitol Police and two officers who died after the riot, Brian D. Sicknick and Howard Liebengood, as well as related emails; a memo about a potential lawsuit against several states that Mr. Biden won last year; an email chain from a state official regarding election-related issues; and talking points on supposed election irregularities in one county in Michigan.

Mr. Clark called the committee’s request a “broad document dump” that was nothing more than a “partisan” attack.

Judge Chutkan asked him to tone down the language.

“I agree with you, Mr. Clark: Some of these requests are alarmingly broad,” she said. “But some of them are very specific, and are specifically targeting the events of Jan. 6.”