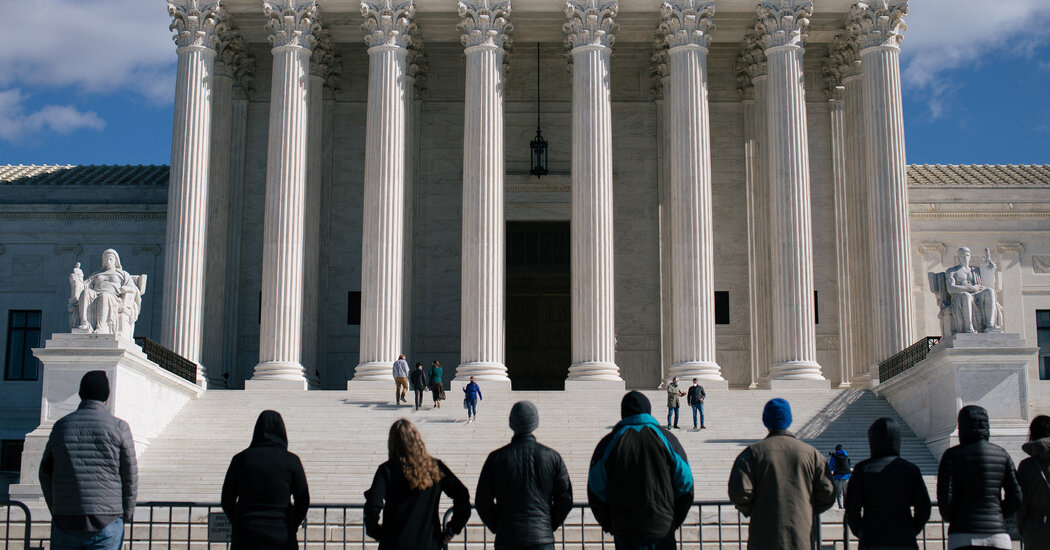 Justice Barrett joined the court last Tuesday, a little more than a month after the death of Justice Ruth Bader Ginsburg and the rushed and contentious confirmation process that followed President Trump’s nominating her.

And with the court hearing arguments by phone on Monday because of the pandemic, Justice Barrett did not join her colleagues on the bench and take the junior justice’s traditional seat on its far right. But Chief Justice John G. Roberts Jr. did start Monday’s session by greeting the newest justice.

“It gives me great pleasure on behalf of myself and my colleagues to welcome Justice Barrett to the court,” he said. “We wish you a long and happy career in our common calling.”

The justices ask questions in order of seniority when they hear arguments over the phone, meaning that Justice Barrett went last on Monday. Her first question built on ones that had been posed by the next most junior member of the court, Justice Brett M. Kavanaugh, appointed by Mr. Trump in 2018.

“I want to pick up on the thread that Justice Kavanaugh was just exploring with you,” Justice Barrett told a lawyer for the federal government.

Justice Barrett is working in Justice Ginsburg’s old chambers, and she has praised her predecessor as “a woman of enormous talent and consequence” whose “life of public service serves as an example to us all.”

But Justice Ginsburg’s law clerks have been assigned to work for the other three liberal justices, all Democratic appointees. Justice Barrett has hired four law clerks, three of whom had earlier Supreme Court clerkships, with Justices Clarence Thomas, Samuel A. Alito Jr. and Anthony M. Kennedy, all Republican appointees. Two of those three had also served as clerks to Justice Kavanaugh when he was an appeals court judge.

The choice of law clerks was a small but vivid sign that Justice Barrett is almost certain to become part of a six-member conservative majority.

Her first case concerned efforts by the Sierra Club, an environmental group, to obtain documents about harm to endangered species. The federal government has resisted those efforts, saying the records were protected by an exemption to the freedom of information law shielding documents that would disclose deliberations before final decisions.

The dispute started in 2011, when the Environmental Protection Agency proposed a new regulation to govern cooling water intake structures, which can harm aquatic life. Under the Endangered Species Act, the agency was required to consult with two other units of the federal government — the U.S. Fish and Wildlife Service and the National Marine Fisheries Service — to gauge and address harm the regulation would do.

The services prepared draft documents saying that the proposed regulation would jeopardize endangered species and, apparently as a consequence, the E.P.A.’s final regulation was more stringent than the one it had initially proposed.

Justice Barrett asked Matthew Guarnieri, a lawyer for the federal government, what judges should do if they suspect that government officials had stamped documents as “drafts” to avoid having to disclose them. “What other factors would a court consider?” she asked.

Mr. Guarnieri listed various “peripheral considerations that a court might take into account in determining that the label of a document as ‘draft’ is, in fact, accurate.”

That appeared to strike Justice Barrett as too complicated. “That’s a pretty fact-intensive determination,” she said, and she pressed him for a simpler test. “So it’s not your position that we should adopt some sort of bright line saying, listen, it’s not over until it’s over, it’s not until it’s actually issued in the sense of being final?” she asked.

Mr. Guarnieri was happy to agree to a bright-line rule, and Justice Barrett reviewed the bidding.

“So your first order of preference would be the kind of formalistic line that I was just describing,” she said. “And then your backup argument would be, if the court was uncomfortable about the possibility of avoiding FOIA obligations by, say, the stamping ‘draft’ on the top, that we go with the more kind of multifactor, fact-specific test.”

Mr. Guarnieri agreed. “That captures the way that we think the case ought to be resolved,” he said.

Later, Justice Barrett pressed Sanjay Narayan, a lawyer for the Sierra Club, after he argued that documents should be disclosed if they had “appreciable legal consequences.”

She said she could see how draft documents might have practical consequences, but she said she was doubtful they could have legal ones.

Before the argument in the case, U.S. Fish and Wildlife Service v. Sierra Club, No. 19-547, the court issued a pair of unsigned decisions, ruling for a Black Lives Matter activist and a prisoner subjected to abusive conditions. Justice Barrett did not participate in the decisions.

In the first, it vacated an appeals court ruling against DeRay Mckesson, a Black Lives Matter activist who helped organize a protest in Baton Rouge, La., in the summer of 2016 after the fatal shooting of a Black man, Alton B. Sterling, by two police officers. The demonstration started peacefully but turned violent.

An unknown demonstrator threw a rock or something similar at a police officer identified in court papers as John Doe, badly injuring him. The officer sued Mr. Mckesson, arguing that he was indirectly responsible for the assault given his role in organizing the protest.

The U.S. Court of Appeals for the Fifth Circuit, in New Orleans, allowed the case to move forward, rejecting Mr. Mckesson’s argument that his role in organizing the protest was protected by the First Amendment.

The Supreme Court did not address that constitutional argument, suggesting instead that ordinary tort principles in Louisiana law may shield Mr. Mckesson. It instructed the appeals court to ask Louisiana’s Supreme Court for a definitive ruling on that question of state law.

“We conclude that the Fifth Circuit should not have ventured into so uncertain an area of tort law — one laden with value judgments and fraught with implications for First Amendment rights — without first seeking guidance on potentially controlling Louisiana law from the Louisiana Supreme Court,” the opinion said.

Justice Thomas noted a dissent but did not give reasons.

In the second unsigned decision, the court ruled that Trent Taylor, an inmate in Texas, could sue corrections officers for holding him for six days in what he called “shockingly unsanitary cells.” The first, he said, was covered in feces. The second, he said, was frigidly cold and flooded with raw sewage.

The Fifth Circuit ruled that the conditions violated the Eighth Amendment’s prohibition of cruel and unusual punishment. But the appeals court said the officers were entitled to qualified immunity because it had not been clearly established that “prisoners couldn’t be housed in cells teeming with human waste” for “only six days.”

The Supreme Court reversed. “No reasonable correctional officer could have concluded that, under the extreme circumstances of this case, it was constitutionally permissible to house Taylor in such deplorably unsanitary conditions for such an extended period of time,” the court’s opinion said.

In a concurring opinion, Justice Alito questioned the Supreme Court’s decision to intervene but said its ruling was correct. Justice Thomas dissented but again gave no reasons.