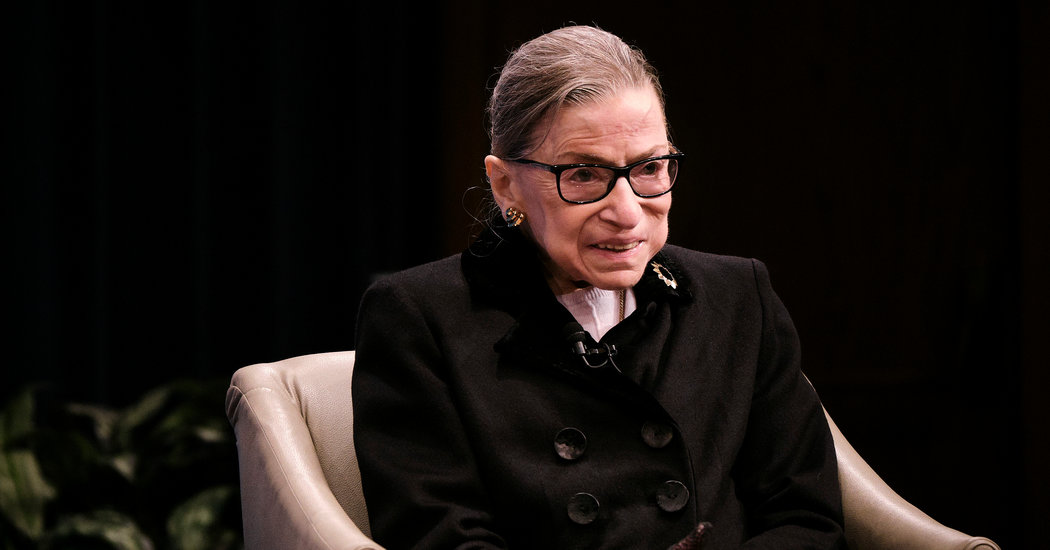 WASHINGTON — Justice Ruth Bader Ginsburg was hospitalized for treatment of a gallbladder condition, the Supreme Court announced on Tuesday. She had participated in oral arguments held by conference call on Tuesday morning, and the court said she planned to take part in Wednesday’s arguments by telephone from the hospital.

The court said Justice Ginsburg was treated for acute cholecystitis, a benign gallbladder condition, at Johns Hopkins Hospital in Baltimore. “Following oral arguments on Monday,” a statement from the court said, “the justice underwent outpatient tests at Sibley Memorial Hospital in Washington, D.C., that confirmed she was suffering from a gallstone that had migrated to her cystic duct, blocking it and causing an infection.”

The treatment did not involve surgery, the statement said without elaboration. Gallstones can sometimes be removed through a scope passed down the digestive tract. If the blockage has caused an infection, it may be treated with antibiotics.

Gallstones are more common in women than in men, and are more likely to form in people over 40. The most common type are made mostly of cholesterol.

When a stone blocks a duct, it causes pain and sometimes nausea and vomiting. If there is an infection, there may be fever.

The statement said Justice Ginsburg was resting comfortably and “expects to stay in the hospital for a day or two.”

Justice Ginsburg, 87, has had a series of recent health scares. Last summer, she underwent three weeks of radiation treatment for a malignant tumor on her pancreas. “The tumor was treated definitively and there is no evidence of disease elsewhere in the body,” the court said in a statement at the time.

That was Justice Ginsburg’s fourth brush with cancer, following surgery in 2018 to remove two malignant nodules from her left lung, surgery for early-stage pancreatic cancer in 2009 and treatment for colon cancer in 1999.

The court stopped hearing arguments in its courtroom in early March in light of health concerns, postponing arguments in about 20 cases. The court started hearing two weeks of arguments by conference call on Monday, providing the public with live audio for the first time. At arguments on Monday and Tuesday, Justice Ginsburg’s questions were characteristically crisp and cogent.

Justice Ginsburg is the senior member of the court’s four-member liberal wing. She has repeatedly vowed to stay on the court as long as her health holds and she stays mentally sharp.

President Trump has appointed two members of the Supreme Court, Justices Neil M. Gorsuch and Brett M. Kavanaugh. The last president to appoint more than two justices in his first term was Richard M. Nixon, who put four on the court from 1969 to 1972. Those appointments spelled the end of the liberal court that had been led by Chief Justice Earl Warren and created a conservative majority that remains to this day.

The current court is closely divided, with five Republican appointees and four Democratic ones. A third Trump appointee would not only make the balance more lopsided but would also almost certainly move the court’s ideological center to the right.

Justice Ginsburg was named to the court in 1993 by President Bill Clinton. She was the first Democratic appointee since 1967, when President Lyndon B. Johnson nominated Thurgood Marshall.

During the Obama administration, some liberals urged Justice Ginsburg to step down so that President Barack Obama could name her successor. She rejected the advice.

“I think it’s going to be another Democratic president,” Justice Ginsburg told The Washington Post in 2013. “The Democrats do fine in presidential elections; their problem is they can’t get out the vote in the midterm elections.”

Mr. Trump, whose election proved her wrong, has been critical of Justice Ginsburg, saying in 2016 that “her mind is shot” and suggesting that she resign. His sharp words came after Justice Ginsburg criticized Mr. Trump in a series of interviews. She later said she had made a mistake in publicly commenting on a candidate and promised to be more “circumspect” in the future.

More recently, he urged Justices Ginsburg and Sonia Sotomayor to recuse themselves in all cases involving him.