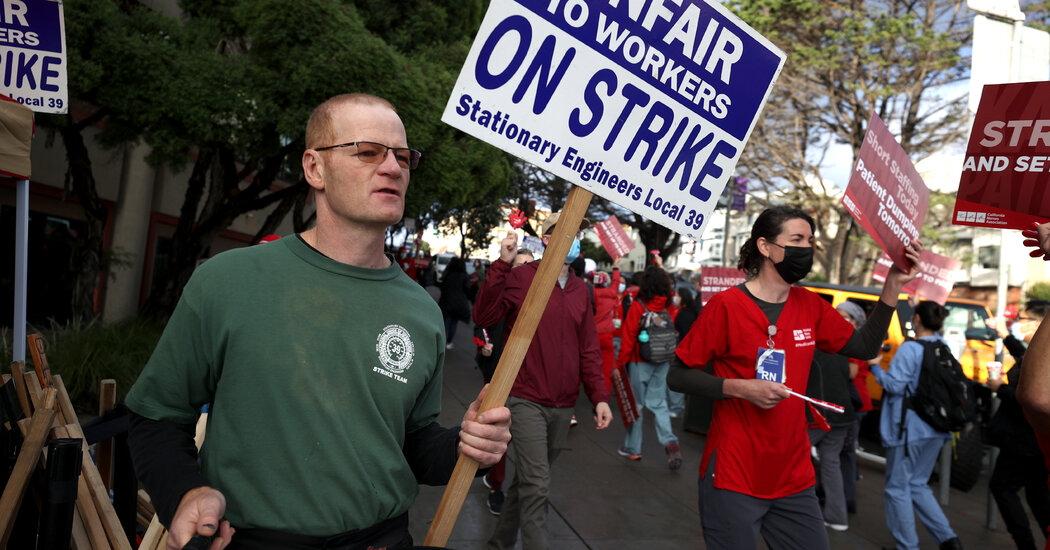 More than 30,000 West Coast workers at the health care provider had planned to go on strike on Monday.

Kaiser Permanente, the health care provider and hospital network, reached a tentative agreement on Saturday with a coalition of unions representing workers in California, Oregon and other states that will avert a strike of more than 30,000 workers scheduled to begin on Monday.

The four-year agreement would provide workers with wage increases and address concerns about adequate staffing. It also abandons a proposal by Kaiser to pay new workers significantly less than current workers, which many had cited as a source of frustration that led to the planned strike.

Hal Ruddick, the executive director of the labor coalition representing Kaiser employees, the Alliance of Health Care Unions, said in a statement, “This contract protects our patients, provides safe staffing, and guarantees fair wages and benefits for every Alliance member.”

Christian Meisner, a human resources official at Kaiser, said in a statement that the negotiations were “challenging” but that the agreement “underscores our unwavering commitment to our employees by maintaining industry-leading wages and benefits.”

The agreement would cover a range of employees including nurses, pharmacy workers, physician assistants and nurse practitioners and must still be ratified by union members.

A union spokesman said that the vote would take place over the next few weeks and that employees would continue to work their scheduled shifts during that time. Neither Kaiser nor the unions provided many details of the tentative deal.

Before the agreement was reached, employees had said they were taken aback that Kaiser had offered them smaller wage increases than under their previous contract and that it had sought to reduce wages for future workers. They said they felt betrayed that the company would make such an offer amid the stress of the pandemic.

“We did unimaginable things, put ourselves in harm’s way, worked long hours, took things home to our families,” Kimberly Mullen, a registered nurse at a Kaiser facility in Southern California, said in an interview before the agreement. “It was very insulting after a pandemic. We were all feeling — I don’t know any other word — backstabbed.”

The company did not immediately respond to a request for comment about its wage offers but has previously said that it was trying to rein in the cost of health care and that Kaiser employees in some markets are paid a significant premium above comparable workers in their areas. The unions have disputed the company’s methodology for making this determination.

Ms. Mullen said in a text on Saturday that she was relieved that so many workers would not have to strike, but, “I am still holding some disappointment and animosity to the upper leadership of Kaiser Permanente.”