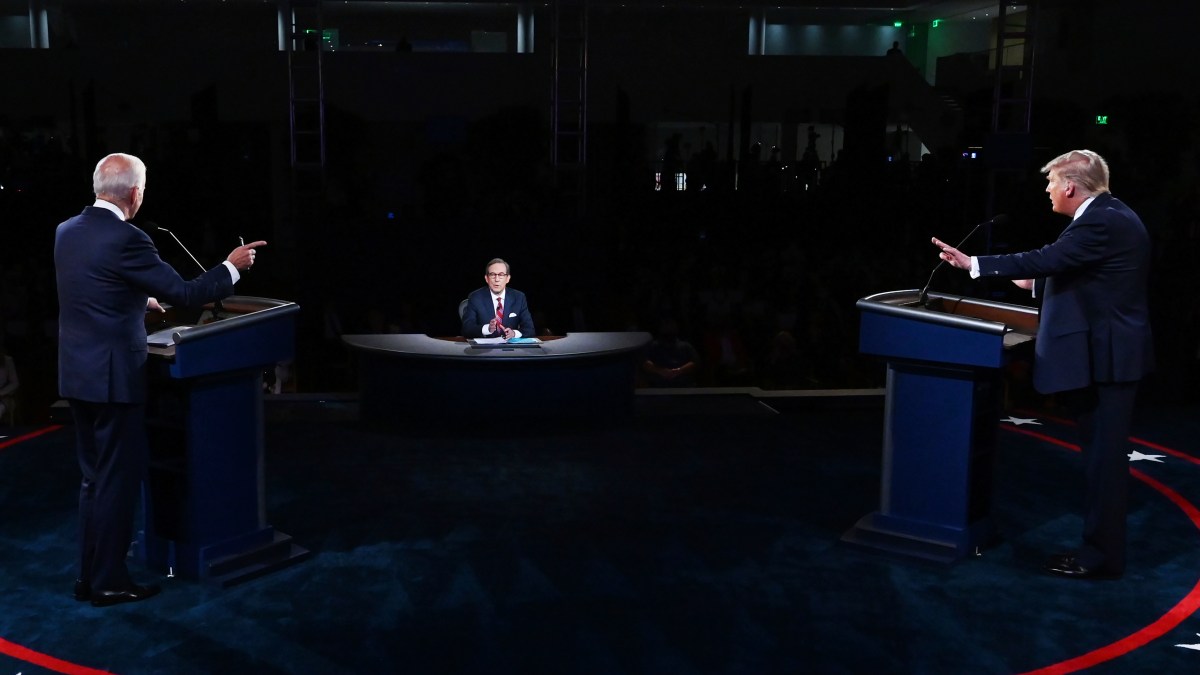 President Donald Trump and Democratic presidential nominee Joe Biden battled over who would best lead the country out of a pandemic in a chaotic debate in which Trump repeatedly interrupted the moderator, Fox News’ Chris Wallace, and his opponent, talking over both men.

The men were questioned about the Supreme Court, the coronavirus crisis, the economy, race and violence in American cities, and the integrity of the election.

Here are some top exchanges from the night:

After many interruptions while trying to discuss the Supreme Court vacancy, Democratic Nominee for President Joe Biden asked President Donald Trump to “shut up.”

Trump repeatedly interrupted right from the start of the debate, talking over not only Biden but also over the moderator, to the point that it was difficult to hear what either man was saying.

Trump’s refusal to quiet down left Wallace pleading with him to abide by the rules of the debate that his campaign had agreed to.

“Can you let him finish, sir,” Wallace said.

“You are both speaking at the same time,” he said.

Wallace told Trump that he was breaking in more often than Biden as he asked him again to stop. “You asked him a question, let him finish,” he said.

How Much Did Trump Pay in Income Tax?

Asked about The New York Times review of President Donald Trump’s tax returns that found he paid $750 in federal income taxes in 2016 and 2017, Trump said he had paid millions of dollars in income tax.

But Trump, who broke with tradition in 2016 by not releasing his tax returns, has still not released any of his returns, and he did not agree to release his returns now. Biden released his returns just before the debate. His documents show that he paid paid nearly $300,000 for 2019.

The New York Times reported that Trump had made required payments to the I.R.S. of $1 million for 2016 and $4.2 million for 2017 as he asked for extensions, but he eventually filed claiming $750 for each year, so most of those payments were rolled forward to cover future potential taxes.

The New York Times article also revealed that Trump has hundreds of millions of dollars in debt coming due in the next four years, though it is not known to whom. Democrats say Trump’s debt is a national security risk for the country.

President Donald Trump and Democratic Nominee for President Joe Biden debate race issues in the United States and the role of law enforcement at the first Presidential Debate in Cleveland, Oh.

Trump would not directly answer a question from Wallace about whether he was willing to condemn white supremacists and military groups.

“I would say almost everything I see is from the left-wing, not the right-wing,” Trump said. “I’m willing to do anything. I want to see peace.”

Wallace pressed Trump, who finally said, “Proud Boys, stand back, stand by, but I’ll tell you what, somebody’s got to do something about Antifa and the left because this is not right-wing problem.”

The Proud Boys and its leaders celebrated the moment on social media, NBC News reported.

The Proud Boys is a self-described “Western chauvinist” organization, and is considered a violent, nationalistic, Islamophobic, transphobic and misogynistic hate group, according to the Anti-Defamation League, a nonprofit organization that tracks extremist groups.

Trump was severely criticized after a white supremacist rally in Charlottesville, Virginia, when he said there were good people “on both sides.” A counter-protester was killed.

Voting Concerns During a Pandemic

On the topic of voting for a presidential election during a pandemic, Wallace asked the candidates if, considering there are expected to be millions of ballots being cast this year by mail, they will wait until all votes are counted to declare victory, and if they were counting on the U.S. Supreme Court to settle any possible electoral dispute.

Trump did not commit to waiting until all ballots are counted. Biden did.

“I think I’m counting on (the Supreme Court) to look at the ballots … I hope we don’t need them,” Trump said, endorsing voting in person mainly but also securely by mail, which is how Trump plans to vote this year.

Trump urged his supporters to “watch very carefully” when they go into polls.

“I hope it’s going to be a fair election. If it’s a fair election, I’m 100% on board, but If I see tens of thousands of ballots being manipulated, I can’t go along with that,” Trump said.

Biden said he would wait until the election is independently certified before declaring victory.

“Here’s the deal. We count the ballots … some of these ballots in some states can’t even be opened until Election Day, and if there’s thousands of ballots it’s going to take time to do it,” Biden said.

“Once the winner is declared after all the ballots are counted, all the votes are counted, that’ll be the end of it,” Biden said.

Biden talked about how proud he was of his late son Beau who served in Iraq with the Delaware Army National Guard. It was a rebuke of Trump, who is accused of calling U.S. Marines who died in World War I “losers” and “suckers,” according to an article in The Atlantic, a claim Trump denies.

But Trump tried repeatedly to go after Biden’s other son Hunter, raising the issue of Hunter Biden’s discharge from the Navy Reserve after failing a cocaine test.

Biden answered that his son had put his drug use behind him.

The Republicans have attacked Biden through his son Hunter, particularly through Hunter Biden’s position on the corporate board of Burisma, the Ukrainian energy company, while Joe Biden was vice president.

Trump has accused the media of deliberately ignoring corruption, but there is no evidence of any wrongdoing by either of the Bidens. Most recently, Republican Sen. Ron Johnson released a report from a GOP inquiry that even he agreed lacked “massive smoking guns” and that repeated unproven accusations similar to ones pushed by Russia.

State Department officials did warn about the millions paid to Hunter Biden by Burisma but said the payments did not influence the U.S. anticorruption agenda in Ukraine.