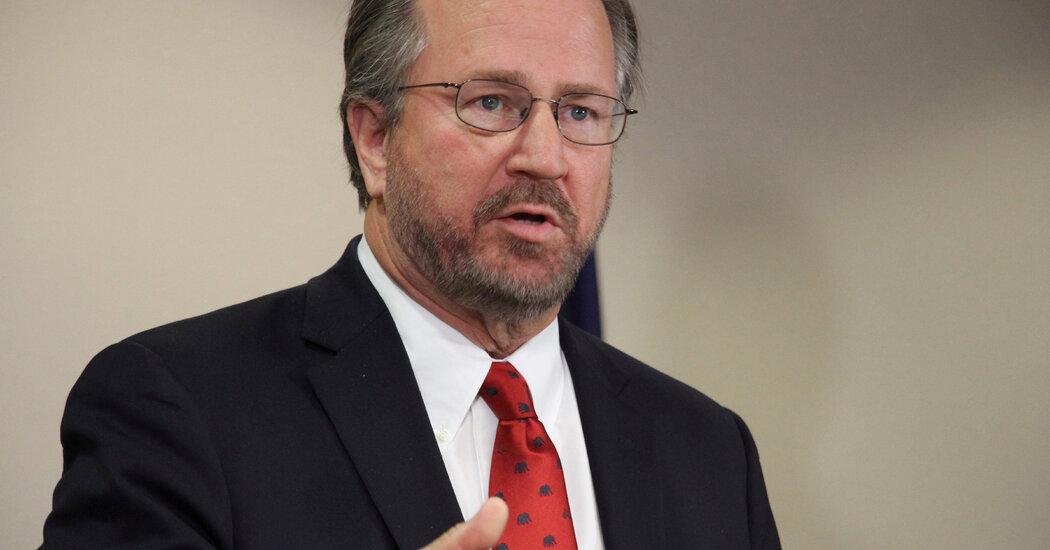 On March 16, Kevin G. Clarkson, attorney general for the state of Alaska, texted a female state employee on her personal phone. He wrote “You’re beautiful … sweet dreams.” The message included an emoji of a smiling face blowing a kiss. Mr. Clarkson added, “Sorry to bother you.”

The following day, Mr. Clarkson, who is married, texted her and asked, “So what are you doing sweet lady?”

Over the course of 27 days in March, Mr. Clarkson sent this employee 558 text messages, according to The Anchorage Daily News and ProPublica, which obtained copies of the messages. The news outlets did not identify the employee.

On Tuesday, the news outlets published a news article about Mr. Clarkson’s text messages. Hours later, the governor of the state, Mike Dunleavy, said in a statement that Mr. Clarkson had resigned from his appointed office.

“Kevin Clarkson has admitted to conduct in the workplace that did not live up to our high expectations, and this is deeply disappointing,” Governor Dunleavy, a Republican, said in a statement. “This morning he took responsibility for the unintentional consequences of his actions and tendered his resignation to me.”

A telephone message left for Mr. Clarkson on Tuesday evening was not returned.

Before his resignation, Mr. Clarkson, 61, cut a striking figure in Alaska, with decades of experience, socially conservative views and a record of political legal battles.

Before he was appointed by Mr. Dunleavy to be attorney general, Mr. Clarkson helped write the 1998 state constitutional amendment defining marriage as between a man and a woman. He also represented Republicans in a lawsuit to overturn the limit on some campaign contributions in Alaska.

In May, Mr. Clarkson sent a letter to a federal judge asking him to stop the prosecution of Michael Flynn, a former top aide to President Trump.

Mr. Clarkson sought to play down the nature of the messages in his resignation letter, released by the governor’s office and dated Aug. 24. They were, he wrote, “conversational,” “positive,” “reciprocal” and “‘G’ rated.”

“There is nothing remotely salacious about the texts,” he wrote.

There were, according to The Anchorage Daily News and ProPublica, at least 18 written text messages from Mr. Clarkson asking the decades-younger woman to visit his home. In his resignation letter, he said he extended the invitations to the woman’s children, “which she politely declined.”

Mr. Clarkson sent one text message inviting the woman over to his home and included a smiley face and wine glass emoji. She laughingly declined (“Haha”) and noted a doctor’s recommendation to stay “6ft apart,” apparently referring to the coronavirus pandemic.

In another exchange, Mr. Clarkson invited the woman to join him, texting, “Come on over and join me haha” followed by two emojis of bare feet. The woman replied, “I wish!!!! Haha,” to which he responded, “Just say ‘the AG told me too’ haha. That’ll go far” and a smiley face emoji. When the woman declined again, saying, “Haha” with several exclamation points, “No waay! I love my job,” Mr. Clarkson pressed ahead: “You can come work at Law haha.”

Mr. Clarkson also sought to explain his repeated encouragements for physical contact with the woman as a byproduct of their workplace rapport.

“In our texts,” he wrote, “we exchanged innocent mutual endearments between us in words and emojis. On several occasions, this person initiated a friendly hug when I came to her work place, and I reflexively gave her a tiny peck of a kiss on top of her head.”

Mr. Clarkson acknowledged that the messages were wrong to send “due to the disparity in our workplace rank” and that he “should have maintained a more distanced and professional relationship.”

Mr. Clarkson said he stopped messaging the employee when she asked him to. More than two months later, the governor’s office was alerted to the exchange by “a representative of political opposition,” Mr. Clarkson wrote.

Mr. Dunleavy’s statement on Mr. Clarkson’s resignation makes no mention of politics and says, “There is nothing more important than the protection of our state employees, and that includes feeling safe when an employee is at work.”

In June, The Anchorage Daily News and ProPublica filed a public records request with state officials for all text or instant messages sent from the personal and state-funded mobile phones of Mr. Clarkson to the female employee. Alan J. Birnbaum, chief assistant attorney general in the state law department, said the department did not have the records.

The news outlets said they obtained the records from a third party, which they did not identify.