A new report by the Capitol Police’s internal watchdog found that department leaders overlooked key intelligence in the run-up to the riot on Jan. 6, including a warning that “Congress itself is the target,” and barred the force’s riot response unit from using its most powerful crowd-control measures.

The 104-page document, entitled “Review of the Events Surrounding the Jan. 6, 2021, Takeover of the U.S. Capitol,” is the most searing portrait yet of the lapses and miscalculations around the most violent attack on the Capitol in two centuries. It adds significant new detail not unearthed in congressional hearings and is likely to inform a coming overhaul of the agency promised by lawmakers.

Michael A. Bolton, the Capitol Police’s inspector general, classified the report as “law enforcement sensitive” and has not released it to the public. But The New York Times reviewed a copy before his testimony to the House Administration Committee, scheduled for Thursday.

Here are the highlights.

The department’s own intelligence unit, which monitors potential threats, warned three days before the riot that supporters of President Donald J. Trump, motivated by his false election fraud claims, were targeting Congress and could become violent.

“Unlike previous postelection protests, the targets of the pro-Trump supporters are not necessarily the counterprotesters as they were previously, but rather Congress itself is the target on the 6th,” said a threat assessment from Jan. 3. “Stop the Steal’s propensity to attract white supremacists, militia members and others who actively promote violence may lead to a significantly dangerous situation for law enforcement and the general public alike.”

The unit was not alone in sounding the alarm. Separately, the Department of Homeland Security warned the agency that it had found a map of the Capitol complex’s tunnel system posted on pro-Trump message boards. And the F.B.I.’s Norfolk field office also relayed concerns on Jan. 5. 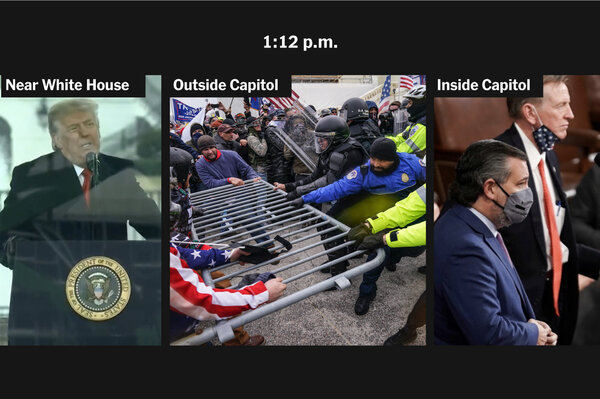 How a Presidential Rally Turned Into a Capitol Rampage

We analyzed the alternating perspectives of President Trump at the podium, the lawmakers inside the Capitol and a growing mob’s destruction and violence.

But Mr. Bolton found that when an operations plan was written two days later, leaders included that there were “no specific known threats related to the joint session of Congress.” His report blames dysfunction within the Capitol Police for the omission.

Department leaders have defended their actions and downplayed the intelligence reports in public testimony. “None of the intelligence we received predicted what actually occurred,” Steven A. Sund, the former Capitol Police chief, told the Senate in February. “These criminals came prepared for war.”

Department leaders ordered a special crowd-control unit not to use its most powerful nonlethal weapons.

The report catalogs several problems related to the force’s civil disturbance unit, a group of officers who contain large crowds and protests. Those shortcomings hindered the ability of the Capitol Police to respond when hundreds of rioters showed up.

The unit, Mr. Bolton wrote, was “operating at a decreased level of readiness as a result of a lack of standards for equipment” and fostered a “culture” that decreased “operational readiness.”

The problems were compounded when department leadership directed the unit not to use some of its most powerful crowd-control tools — such as stun grenades — that rank-and-file officers later said they believed would have helped fight the crowds that eventually overtook them and broke into the building.

“Heavier less-lethal weapons,” Mr. Bolton wrote, “were not used that day because of orders from leadership.”

Elsewhere in the report, the inspector general found that officers responding on Jan. 6 had been outfitted with protective shields that had been stored in a trailer without climate control and “shattered upon impact.”

In another case, officers frantic for something to protect them could not use their shields during the siege because they were locked on a bus.

“When the crowd became unruly, the C.D.U. platoon attempted to access the bus to distribute the shields but were unable because the door was locked,” the report said. As a result, the platoon was “required to respond to the crowd without the protection of their riot shields.”

The report also found that some munitions in the department’s armory had expired.