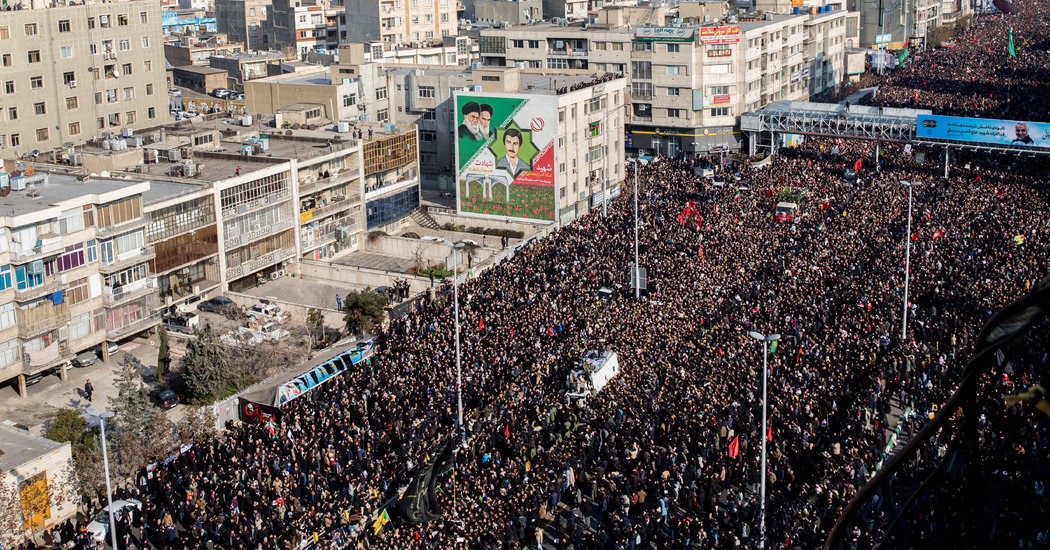 In the tense hours following the American killing of a top Iranian military commander, the country’s supreme leader, Ayatollah Ali Khamenei, made a rare appearance at a meeting of the government’s National Security Council to lay down the parameters for any retaliation. It must be a direct and proportional attack on American interests, he said, openly carried out by Iranian forces themselves, three Iranians familiar with the meeting said Monday.

It was a startling departure for the Iranian leadership. Since the establishment of the Islamic Republic in 1979, Tehran had almost always cloaked its attacks behind the actions of proxies it had cultivated around the region. But in the fury generated by the killing of the military commander, Maj. Gen. Qassim Suleimani, a close ally and personal friend of the supreme leader, the ayatollah was willing to cast aside those traditional cautions.

The nation’s anger over the commander’s death was on vivid display Monday, as millions of Iranians poured into the streets of Tehran for a funeral procession and Mr. Khamenei wept openly over the coffin.

After weeks of furious protests across the country against corruption and misrule, both those who had criticized and those who had supported the government marched together, united in outrage. Subway trains and stations were packed with mourners hours before dawn, and families brought children carrying photographs of General Suleimani.

A reformist politician, Sadegh Kharazi, said he had not seen crowds this size since the 1989 funeral of the Islamic Republic’s founder, Ayatollah Ruhollah Khomeini.

“We are ready to take a fierce revenge against America,” Gen. Hamid Sarkheili of the Revolutionary Guard declared to the throng. “American troops in the Persian Gulf and in Iraq and Syria are within our reach.”

“No negotiations or deal, only war with America,” funeral attendees chanted in a video shared with The New York Times.

A renowned eulogist and member of the Revolutionary Guard, Sadegh Ahangaran, exhorted the funeral crowds to raise their voices so “damned America can hear you” and to “wave the flags in preparation for war.”

The increasingly public vows of direct action on Monday constituted Iran’s latest act of defiance to President Trump. Over the weekend the president had repeatedly threatened to retaliate for any attacks against American interests by ordering airstrikes against as many as 52 potential targets, one for each American hostage held after the seizure of the United States embassy in Tehran in 1979.

In response, Iran’s moderate president, Hassan Rouhani, on Monday responded with his own numerology. “Those who refer to the number 52 should also remember the number 290,” he said on Twitter, a reference to the 290 people killed in 1988 in the accidental downing of an Iranian airliner by an American warship. “Never threaten the Iranian nation,” Mr. Rouhani added.

Where, when and even if Iran may choose to retaliate remains a matter of speculation. As Iranian leaders weighed just what form it might take, analysts said the targets included American troops in neighboring Syria and Iraq, American bases in the Persian Gulf or American embassies or diplomats almost anywhere.

When previous attempts at direct strikes or assassinations have proved unsuccessful, some noted, Iranian-backed militants have turned to the simpler tactic of killing civilians with terrorist bombs.

This was the sequence in 2012 with the Iranian-backed Lebanese group Hezbollah. After failing in attempts to attack Israeli targets or kill Israeli officials in revenge for the killing of one of the group’s leaders, the militants eventually settled on the easier job of bombing a busload of Israeli tourists in Bulgaria, said Afshon Ostovar, a scholar of Iran at the Naval Postgraduate School.

“We are in uncharted territory, and the truth of the matter is nobody knows how Iran is going to respond. I don’t think even Iran knows,” Mr. Ostovar said. “But I think there is a blood lust right now in the Revolutionary Guards.”

In Iraq, where the Parliament had earlier called for the immediate expulsion of the 5,000 American troops stationed there, Prime Minister Adel Abdul Mahdi on Monday listed steps to curtail the troops’ movements.

While plans were being made for departure of the Americans, he said, they would now be limited to “training and advising” Iraqi forces, required to remain within the bases and barred from Iraqi air space.

Mr. Mahdi met with Matthew Tueller, the American ambassador to Iraq, on Monday, and “stressed the need for joint action to implement the withdrawal,” according to a statement and photo released by Mr. Mahdi’s office. He also emphasized Iraq’s efforts to prevent the current tensions between Iran and the United States from sliding into “open war.”

The United States military stirred a media flurry by accidentally releasing a draft letter that seemed to describe imminent plans to withdraw from Iraq. Marine Corps Brig. Gen. William H. Seely III, the commander of the United States forces in Iraq, wrote to the Iraqi government that the American troops would be relocated “to prepare for onward movement.”

“We respect your sovereign decision to order our departure,” he wrote.

But Defense Department officials played down the significance of the letter. “Here’s the bottom line, this was a mistake,” Gen. Mark A. Milley, President Trump’s top military commander, told reporters at the Pentagon during a hastily called press briefing. “It’s a draft unsigned letter because we are moving forces around.”

Although the Trump administration has said that the United States killed General Suleimani because he was planning imminent attacks against American interests, there were indications Monday that he may have been leading an effort to calm tensions with Saudi Arabia.

Prime Minister Mahdi of Iraq said that he was supposed to meet with General Suleimani on the morning he was killed, and that he expected him to bring messages from the Iranians that might help to “reach agreements and breakthroughs important for the situation in Iraq and the region.”

Such notification of Congress is required by law, and to classify the entirety of such a notification is highly unusual.

Senator Chuck Schumer of New York, the Democratic leader, and Senator Robert Menendez of New Jersey, the top Democrat on the Foreign Relations Committee, said in a joint statement that it was “critical that national security matters of such import be shared with the American people in a timely manner.”

And Senator Mitch McConnell, the Republican leader, urged Mr. Trump’s critics not to jump to conclusions. “Unfortunately, in this toxic political environment, some of our colleagues rushed to blame our own government before even knowing the facts,” he said.

For its part, Iran simultaneously continued a monthslong push against the Trump administration over its demands that Tehran submit to a more restrictive renegotiation of a 2015 accord with the Western powers over its nuclear research. The Trump administration has sought to pressure Iran by devastating its economy with sweeping economic sanctions, which Iranian officials have denounced as economic warfare.

The sanctions set off the cycle of attacks and counterattacks that culminated last week in the killing of General Suleimani. Iran has also responded with carefully calibrated steps away from the deal’s limits on its nuclear program. On Sunday, Iranian officials said that they had now abandoned all restrictions on the enrichment of uranium, though they said they would continue to admit inspectors from the International Atomic Energy Agency.

Amid the emotion of the funeral, some called for vengeance that would remake the region. “Even if we attack all of U.S. bases and even if we kill Trump himself it’s not enough revenge,” Brig. Gen. Amir Ali Hajizadeh said at the funeral. “We must totally eliminate all U.S. troops from the region.”

For now, Iranian officials seem to be in no rush to strike back against the United States, possibly enjoying their ability to spread anxiety throughout the West. They seem content to bask in the nationalist surge in their popularity, growing international sympathy and the push to expel American troops from Iraq. “I don’t think they want to shift the conversation yet,” said Sanam Vakil, a scholar of Iran at Chatham House, a research center in London.

But for the hard-liners who dominate the Iranian National Security Council, she said, some vigorous retaliation would be the only rational response. “A nonresponse would appear weak and invite further pressure, creating problems in domestic politics and internationally,” she said.