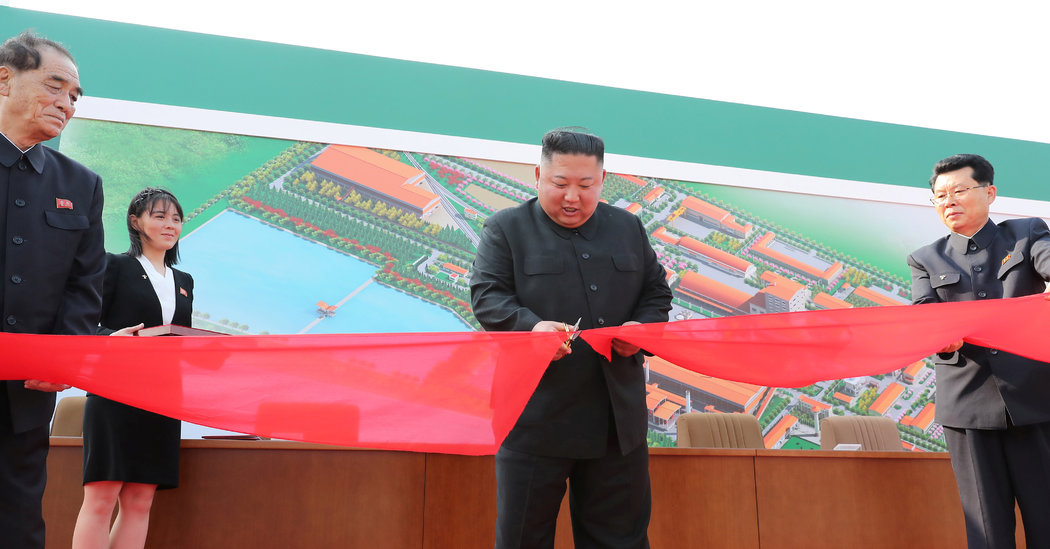 He appeared at a ceremony at a factory in the city of Sunchon, the North’s state news agency said, later releasing photos from the event. The report could not immediately be independently confirmed.

Mr. Kim, 36, had last appeared publicly on April 11. Speculation about his health — and about who would take over the hermetic, nuclear-armed country should he become incapacitated or die — began swirling after Mr. Kim missed the state celebrations of his country’s biggest holiday on April 15. On that day, the North marks the birthday of his grandfather Kim Il-sung, the country’s founder.

Rumors subsequently went into overdrive, claiming that Mr. Kim was “in grave danger,” in a “vegetative state” after botched heart-valve surgery, or in quarantine after contracting Covid-19. Other reports said that China had sent doctors to Pyongyang to save him.

After its initial report on Saturday, the North Korean news agency released photos showing a smiling Mr. Kim applauding, cutting a ribbon and standing with his hands behind his back at a new fertilizer factory.

“All the participants again burst into thunderous cheers of ‘hurrah,’” the news agency said, taking its characteristically fulsome tone for coverage of the leader. It said that Mr. Kim “warmly acknowledged the builders and masses raising thunderous cheers” and went on to tour the factory, accompanied by senior officials from the ruling Workers’ Party, including his only sister, Kim Yo-jong.

Although no outside media was apparently allowed to witness the ceremony, the report by the North’s official Korean Central News Agency followed a familiar pattern. State media typically reports Mr. Kim’s public appearances a day after they take place, carrying photos from the scene as well.

The South Korean government did not immediately comment on the report, but it has pushed back against the recent speculation that Mr. Kim was in poor health. Its unification minister, Kim Yeon-chul, had called the reports “fake news,” saying that South Korea could say “confidently” that there was no evidence to confirm the rumors.

Amid the reports, North Korea had continued to send out letters and gifts to foreign leaders and domestic workers under Mr. Kim’s name. But until Saturday, it had gone weeks without reporting any public appearances by its leader or responding to the speculation about his health, and its silence fueled the rumor mill.

As recently as Friday, Ji Seong-ho, a North Korean defector who recently won a seat in the South Korean Parliament, told reporters that he was “99 percent sure” that Mr. Kim had died last weekend.

The weeks of rumors showed how “unprepared” the outside world remains “for a potential political crisis caused by something like the sudden, unexpected death of the dictator in a country bristling with dozens of nuclear weapons,” said Danny Russel, vice president of the Asia Society Policy Institute.

“We got a glimpse of the danger of loose nukes and worse if the death of Kim Jong-un had unleashed a destabilizing power struggle” in the North, where Mr. Kim had no designated adult heir in place, Mr. Russel said by email. Mr. Russel had dealt with North Korea as a National Security Council director at the White House and assistant secretary of state for Asia.

He said the past few weeks showed that “authoritative information about the North Korean supreme leader’s well-being and whereabouts is very closely guarded, and therefore dramatic rumors about his health and behavior need to be regarded with considerable skepticism.”

The North’s report on Saturday did not dispel the mystery over why Mr. Kim missed the important state ceremonies for his grandfather’s birthday — an absence that set off the series of speculative reports. A South Korean news website that hires North Korean defectors as reporters said Mr. Kim had undergone heart surgery. U.S. news reports said that Washington was monitoring intelligence suggesting that Mr. Kim was “in grave danger.”

It was not the first time Mr. Kim had disappeared from public view for weeks at a time or been the subject of intense speculation about his health. And the information vacuum surrounding the doings of North Korean leaders leaves fertile ground for misinformation to spread.

Some past rumors about the health of North Korean leaders have indeed proved true, like speculation that Mr. Kim’s father, Kim Jong-il, had a stroke in 2008. But most have turned out to be groundless.

In 2014, Kim Jong-un disappeared for more than a month, prompting rumors that he might have been deposed in a coup. North Korean media later showed him walking with a cane; South Korean intelligence said he had undergone ankle surgery.

Over the years, top officials reported to have been executed have also often resurfaced. In 2015, a North Korean defector claimed that Mr. Kim had ordered his own aunt killed with poison. But the aunt, Kim Kyong-hui, re-emerged in Pyongyang in January.