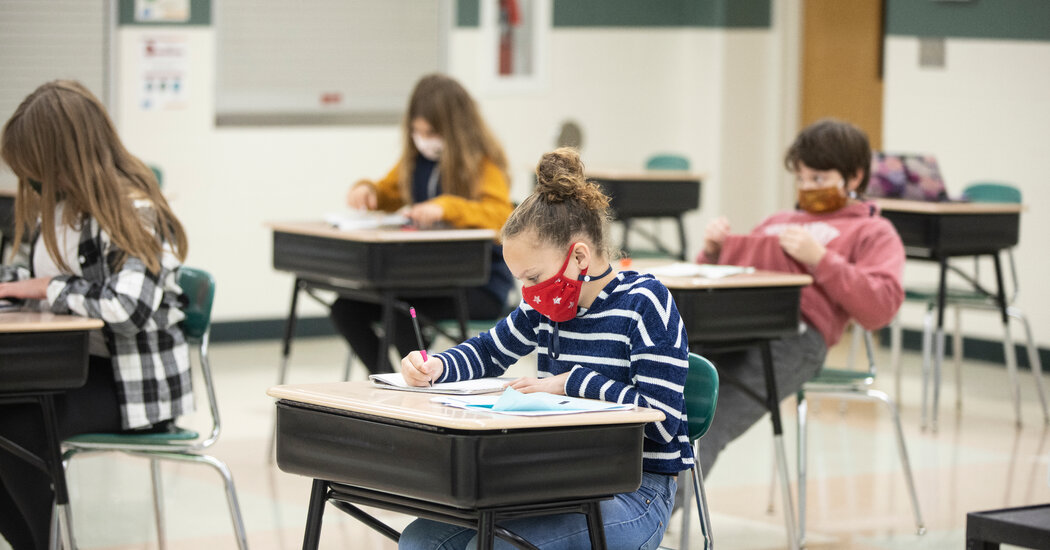 Angry activists have commandeered so many routine school board meetings in the past few months that “Saturday Night Live” — which typically reserves its political satire for politicians on the national stage — recently devoted a segment to satirizing one of these raucous meetings. Less humorously, Attorney General Merrick Garland has launched a push to address the nationwide uptick in violent threats against school board members, teachers and public school workers.

This week, communities across the country will vote in school board and other local elections. Americans should remember that for all the ways in which our political discourse has become nationalized, the structure of our democratic institutions continues to confer tremendous power to local governments.

Between protests against Covid policies and protests against critical race theory, the infusion of national politics into local meetings may seem like the latest iteration of conservative activism. The Obama years saw the rise of the Tea Party. National surveys showed that during Obama’s first term, Republicans were more likely to attend a local meeting than Democrats. But during the Trump years, liberal organizations like Indivisible and other “resistance” groups were the ones that sought to galvanize residents at the grass roots level. With Democrats back in control of the federal government, the grass roots energy is now shifting back to conservatives, as Republicans turn to local meetings to channel their frustrations about critical race theory and mask mandates.

Local public meetings are easy to dismiss: They can alternate between boring and chaotic. They can be dominated by extremists, by special interests or by people with too much time on their hands. But people who think local democracy is beneath them are making a big mistake. Not only are consequential decisions made at public meetings; local democracy holds the secret to counteracting the endemic problem of partisan polarization. In fact, it offers the potential for interesting new coalitions to spring up, defying the ordinary dividing lines of partisan politics.

Local political activism on both the left and the right harkens back to the 1950s and 1960s, when suburban residents across both the ideological spectrum and the country found an outlet for national political concerns in their own backyards. In the suburbs of Boston, for instance, liberal residents launched local organizations that dealt with issues ranging from civil rights and affordable housing to environmentalism and peace. They urged their communities to pass local ordinances and make changes to existing policies that aligned with these priorities. In Southern California, conservative suburbanites led campaigns against school board members they feared were indoctrinating students with communist curriculums.

The postwar era boasted a much higher rate of civic engagement. Many suburbanites found local politics a means of forging community. Today, however, what seems to motivate residents to get involved at the local level is less a generalized sense of civic duty than it is dissatisfaction with the status quo. Today’s media environment exacerbates tensions at local meetings. Participants echo the talking points they hear on social media or on cable news, gleaned either from conservative circles (e.g., in the case of critical race theory) or progressive circles (e.g., in the case of police reform).

Our political culture is more nationalized than before. And yet, the structure of politics is as local as ever. Now, like in those postwar years, when suburbanites first turned to local government to lobby for change, Americans are recognizing that the local level is where they might exert some control and influence over the political system. Whether about schools, police, public health, homelessness or the environment, local governments affect public policies in ways that directly affect our lives.

Despite the promise of local politics, however, it can seem like a troubling avenue for resolving political disputes, as the loudest and most reactionary voices can wield the power to disrupt or derail the proceedings. For one thing, the elected officials at the front of the room are often part-timers or volunteers. What’s more, local elected officials are often in office thanks to elections in which the overwhelming majority of eligible voters failed to cast a ballot.

Participation in public meetings can be time-consuming and inconvenient. Hourslong evening meetings aren’t a realistic option for many people. The burdens of participation mean that those who show up are often older, wealthy, white homeowners.

For all that is problematic about local political activism, it can nevertheless be an antidote to political polarization and other civic concerns. On many issues, local political fights do not cleanly follow national ideological or partisan positions. A municipal union aligned with Democrats in national politics may oppose local progressive activists. A business owner aligned with Republicans in national politics may oppose anti-mask conservatives down the street.

In a liberal community, the strongest supporters and the fiercest opponents of police reform, affordable housing and equalizing education may all be registered Democrats. In a conservative community, a local Republican election official or health authority trying to run an election or implement health precautions may have Republican detractors as well as Republican supporters.

The strange bedfellows and intraparty conflicts that come with local politics create a rare space for different coalitions to form than those in Washington, D.C. The national political parties are averse to wading into fights that pit fellow partisans against one another, so they stay away from local politics. The nonpartisan or bipartisan coalitions that form in the absence of parties present a model for what politics can look like without so much partisan polarization. Granted, it’s not necessarily a warm-and-fuzzy model for respectful civic dialogue, but separating passionate political conflict from partisan identity may be a step in the right direction in addressing the current crisis in democracy.

The merits or defects of local democracy, however, are a bit beside the point. Local politics is the place for ordinary citizens to go if they want to exert control over the political process. When turnout is only 10 to 20 percent, it doesn’t take much organizing to win elections. When decisions are made in public hearings, 20 passionate residents can make a big difference on policy. When local residents become active because of one issue dear to them — their children’s school, climate change, economic development — activists on other proximate issues have an opportunity to recruit them into deeper political involvement.

Whenever a viral video goes around of a chaotic local meeting, national news junkies might scoff at local politics and all its warts. But those videos let viewers in on an open secret: Everyday, local meetings in the United States are a venue for power brokers making decisions that affect some of the most serious issues facing America. Write them off at your own risk.