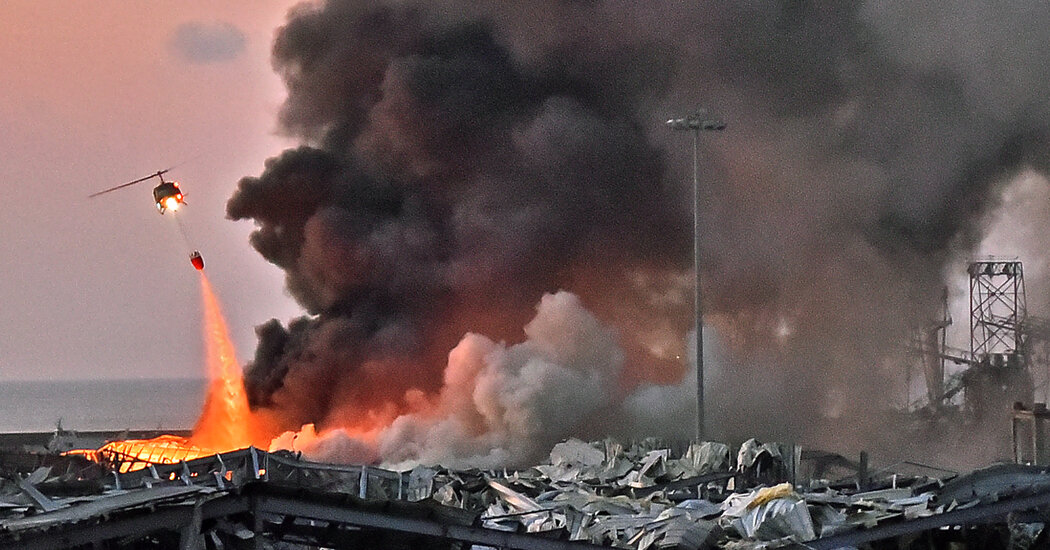 My first summer job was at the port of Beirut. It was the late ’90s and I was just a teenager. I spent muggy months entering shipping data as part of an ambitious new program to move the port from analog to digital log keeping. It was as unglamorous as you would expect from a bottom-rung job in the bowels of a Middle East bureaucracy. But despite the heat and the monotony, there was optimism.

The port was critical infrastructure in an economy rejuvenating after 15 years of civil war. Digital log keeping was part of the future — and an attempt to introduce much-needed order and transparency to a recovering public sector. This was, after all, the same port that had been rendered unusable during the civil war by sunken vessels and unexploded ordnance, save for one area controlled by a militia.

The Lebanon that emerged from that rubble is gone, gradually choked by a cynical political class. Yesterday, it was finished off. The port of Beirut was blown up in an explosion that killed at least 100 people (and counting), wounded more than 4,000 and destroyed blocks of the city. Lebanon now faces a new type of catastrophe for which decades of war and political instability were poor preparation.

By all appearances the port disaster did not involve the usual suspects — Hezbollah, Israel, jihadist terrorism or the government of neighboring Syria. The truth seems to be both duller and more disturbing: Decades of rot at every level of Lebanon’s institutions destroyed Beirut’s port, much of the city, and far too many lives. It is precisely the banality behind the explosion that captures the particular punishment and humiliation heaped on Lebanon.

So far, Lebanese officials are in agreement about what happened, though it’s likely that more than one “official” account will emerge. After all, this is Lebanon, a country deeply divided by politics, religion and history. But here is what we know as of now, according to reporting by credible Lebanese media: Some 2,750 tons of ammonium nitrate unloaded from a disabled vessel in 2014 had been stored in a port warehouse. Then yesterday, a welding accident ignited nearby fireworks — which caused the ammonium nitrate to explode.

Ports are prime real estate for political, criminal and militia factions. Multiple security agencies with different levels of competence (and different political allegiances) control various aspects of their operations. And recruitment in the civilian bureaucracy is dictated by political or sectarian quotas. There is a pervasive culture of negligence, petty corruption and blame-shifting endemic to the Lebanese bureaucracy, all overseen by a political class defined by its incompetence and contempt for the public good.

It’s unclear what combination of these elements let a bomb-in-waiting sit in a warehouse for almost six years, moved fireworks next to it and allowed irresponsible work practices to be carried out nearby. But the catastrophe, while exceptionally severe, is the result of business as usual in Lebanon. The country is familiar with explosions, and it is just as familiar with disasters caused by failures of public services: a garbage crisis that dates back to 2015, an environmental catastrophe in 2019 and power outages this year that last up to 20 hours a day.

The consequences of yesterday’s explosion will be even more serious than the immediate casualties and property damage. The main grain silo, which holds some 85 percent of the country’s cereals, was destroyed. Even more, the port will no longer be able to receive goods. Lebanon imports 80 percent of what it consumes, including 90 percent of its wheat, which is used to make the bread that is the staple of most people’s diets. About 60 percent of those imports come through the port of Beirut. Or, at least, they did.

The timing couldn’t be worse. An economic crisis has devastated Lebanon for several months. The country’s currency has collapsed, a problem that is itself a result of years of mismanagement and corruption. Hundreds of thousands of people can no longer buy fuel, food and medicine. As Lebanese have seen their savings wiped out and their purchasing power disappear, a new vocabulary appeared among even my optimistic Lebanese friends and family. To describe the country, they began using words like “doomed” and “hopeless.”

And the coronavirus crisis has placed greater pressure on the health sector. After yesterday’s explosion, hospital staff were reportedly treating injuries in streets and parking lots. The explosion may well put Lebanon on the path to a food and health catastrophe not seen in the worst of its wars.

Lebanon’s political class should be on guard in the weeks ahead: Shock will inevitably turn to anger. But I fear that old habits die hard. These politicians are well practiced in shifting the blame. I don’t expect many — if any — high-level resignations or admissions of responsibility.

Will there be a revolution? An uprising of anger? Any revolutionary impulse has to compete with tribal, sectarian and ideological affiliations. For that matter, so do the facts: Even if a single official version of the port incident is presented (and even if it is true), some will not believe it. Paradoxically, our distrust of our politicians makes it harder to unite against them.

These are real obstacles. Yet there has never been more urgency for reform and accountability, beyond the likely scapegoating of midlevel officials. It is difficult to imagine such a concerted, sustained national movement because it has never materialized. But hunger and a collapse in health care may change that.

Lebanon — and the Lebanese — will need a rapid influx of external aid to stave off a critical food shortage and public health catastrophe. It seems to be coming, from countries across the Middle East and around the world. But this will not arrest the country’s decline. Emergency aid will only magnify public humiliation and helplessness. Yesterday’s explosion made clear that Lebanon is no longer a country where decent people can live secure and fulfilling lives.

As I watched videos of Beirut engulfed in smoke and checked in with my friends and family, I found myself thinking for the first time in a while of that summer when I worked at the port. The digitization project was completed, but parties who disliked the transparency it brought found ways to work around it.

Today, it’s irrelevant, of course. The port is destroyed. As for the Lebanese, they will be far more consumed by survival than progress.

Faysal Itani is a deputy director at the Center for Global Policy and adjunct professor of Middle East politics at Georgetown University.

The Times is committed to publishing a diversity of letters to the editor. We’d like to hear what you think about this or any of our articles. Here are some tips. And here’s our email: [email protected]om.