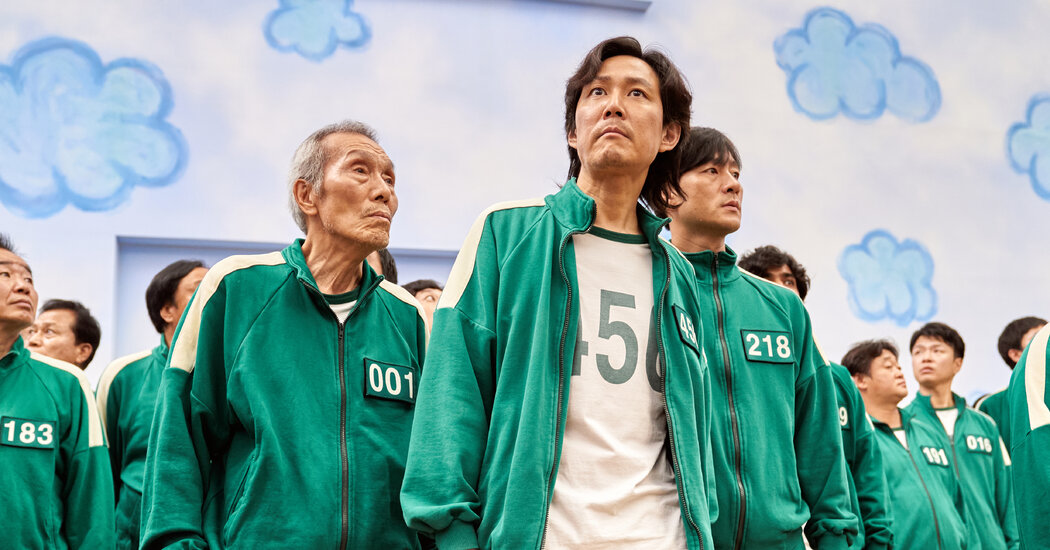 In an interview, the star of the Netflix phenomenon discusses the message of the series and possibilities for a Season 2.

In the month since its debut, the show has become a global phenomenon and was Netflix’s most watched new series ever, according to the streamer. It remains one of the service’s most popular titles. (In another measure of its cultural penetration, it inspired a bizarre “Saturday Night Live” parody over the weekend.) But the worldwide “Squid Game” mania has had little effect on the show’s star, Lee Jung-jae, who says he has been enjoying it all, but that “nothing much” is really different in his life. And doing the series hasn’t made him a better game player, either.

“I’m very bad at games — I never would have made it to the end of ‘Squid Game’ myself,” Lee said last week. “Well, maybe I would have done a relatively good job at marbles, but I don’t think I would have lasted that long. I would have dropped out earlier on in the game.”

“Dropping out” isn’t really an option in the cutthroat games (unless the majority of the contestants vote to stop). The beleaguered competitors persist in the hope that winning the cash prize will redeem their lives, and most are willing to abandon their morals in the pursuit of victory. Even though Gi-hun ultimately does win, the game robs him of his childhood best friend, Sang-woo (Park Hae-soo), his opponent in the final battle.

“Even in Episode 1, when he tries to introduce Sang-woo to other people,” Lee said, “Gi-hun says over and over again that Sang-woo was the smartest kid in his neighborhood. But his friend made so many bad choices in his life, and now in the game, deceiving other people, killing other people. It came as a big shock to Gi-hun when somebody who made him so proud did such brutal things.”

By the end, Gi-hun is so demoralized that he leaves his prize untouched. In the show’s final moments, he realizes he wants to do something to stop this terrible game, funded by wealthy people who bet on the outcomes. Is this a comment on economic disparity and moral bankruptcy? Perhaps. (Our critic is skeptical about its effectiveness.) Lee, however, thinks the real message is about altruism.

Lee talked about “Squid Game” in a phone conversation from South Korea, aided by a translator. These are edited excerpts from the conversation.

What’s it been like seeing the world’s reaction to your show’s success, with all the different memes, parodies and challenges out there? Has any of it made you look at the show in a new light?

I have seen some reactions on social media and on YouTube, and I have been trying to wrap my mind around them. I watched a lot of YouTube reaction videos, videos of the viewers themselves watching “Squid Game” in real time. I had never seen these so-called reaction videos before in my life. I find that very interesting and funny. So yes, I have kept an eye on how the global audience is reacting.

I also have hopes for other Korean content to come, because “Squid Game” has done such a good job in raising awareness of Korean TV series and films, which I hope will now find a wider audience.

“Squid Game” is rather polarizing, as you may know. Some critics have slammed it for being pointlessly violent, or having only a vague message, if any at all. How would you respond to those criticisms?

Well, everyone has their own taste, and I completely respect whatever response each viewer has. I understand that there are mixed responses.

In Korea, people have an altruistic mind-set — you would have no friends if you weren’t kind and considerate. That’s because Korean people believe that their friends are very valuable and important. I really love my friends. I care for them. I would like to maintain a good relationship with them. And I think what “Squid Game” has done is to tie in this theme of altruism to the story line of the survival game. On top of that, it added very impressive visuals.

For those viewers who found the series a little less interesting, I would like to recommend that they watch it again, because “Squid Game” is not really a show about survival games. It’s about people. I think we pose questions to ourselves as we watch the show: Have I been forgetting anything that I should never lose sight of, as a human being? Was there anybody who needed my help, but I was unaware of them? Should I have helped them? I think if they rewatch the series, the audience will be able to notice more of these subtle elements.

Are you aware of the debate among some viewers about whether it’s better to watch the series with subtitles or in the clunkier dubbed version, which offers less nuance?

I’m sure that Netflix has done a great job in making the subtitles in a way that helps the global audience more easily understand the series. I don’t think the small details really matter that much, and I don’t think it would really change the main theme or the story line. But of course, each region has a different culture. There could be a specific word in Korean that accurately encapsulates a concept that might not exist in other regions. I think in that case, changing the words in the subtitles to help an audience understand the story better is fine. I don’t think subtle nuances really change the fundamental way that the series is communicated, so I’m not really concerned about those slight differences.

In the finale, Gi-hun stays in South Korea, rather than getting on the plane to Los Angeles. Netflix hasn’t said whether there will be a Season 2, but if there is, what do you want to see happen to your character?

That’s a very difficult question because the story could go in any direction, and some of Gi-hun’s emotions are very complicated. He’s a very intriguing character. I guess he could go and try and punish the creators of the game. Or he could try to stop new contestants from playing it. Or he could try to join the game again. I have no idea at this point.

We saw this season that the Front Man (Lee Byung-hun) had been a previous winner. So if Gi-hun were offered the opportunity to replace him and run the game, do you think he would take it? It could mean the power to change the rules.

Well, for one, I’m never going to let anyone die! If the story does go in that direction, Gi-hun would end up in a position like Oh Il-nam, the old guy [played by Oh Yeong-su]. But you know, in “The Deer Hunter,” the character that Christopher Walken plays never makes it out of the game, right? That could be what happens.