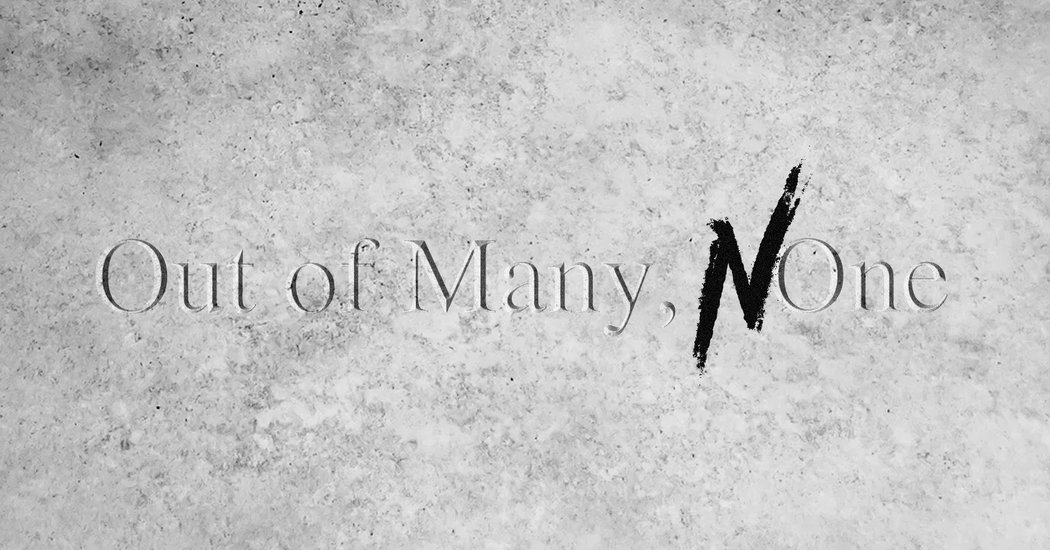 There are so many prisms through which to view the tectonic events taking place on America’s streets since the police killing of George Floyd in Minneapolis, but to my mind the most important is that our country is in the process of renegotiating its founding motto, carried on the seal of the United States: “E pluribus unum,” or “Out of many, one.”

Why do I say this? Two reasons. First, I was born and raised in Minneapolis and I have come to realize how much its good sides and ugly sides — both of which have been on national display lately — are a microcosm of the broad national struggle over what exactly our motto should be today.

I was born in 1953 on the Northside, in the same part of the city as my parents were born, after their parents immigrated from Eastern Europe. The Northside was basically a ghetto of mostly Jews and blacks, who were not integrated there but isolated together by walls of racism and anti-Semitism.

After World War II, much of the Northside Jewish community made an exodus, en masse, to one suburb — St. Louis Park, because it did not have restrictions on home sales to Jews and had enough housing stock to take them all. Practically overnight a suburb that had been almost 100 percent white, Christian and Scandinavian became 80 percent white Christian Scandinavian and 20 percent Jewish. If Sweden and Israel had a baby it would have been St. Louis Park.

Meanwhile, the African-Americans, weighed down by structural racism — with its bad schools, zoning restrictions, polluting highway and factories, all reinforcing multigenerational poverty — mostly could not escape the Northside, which exploded in riots in 1967. When I graduated high school in St. Louis Park in 1971, we had two African-Americans in our class of about 2,500.

I also had an aunt and uncle who had moved to the small town of Willmar, in West Central Minnesota, to start a steel company in 1949, and I spent summers visiting them. For many years they, and two other Jewish families there, constituted “diversity” in the virtually all-white, largely Protestant/Catholic Willmar.

After high school, I left Minnesota to discover the world. I returned some 40 years later to write a book (partly about Minnesota) in 2015, “Thank You for Being Late,” and I found that the world had discovered St. Louis Park and Willmar.

By then, St. Louis Park High School had become 58 percent white, 27 percent black, 9 percent Latinx, 5 percent Asian and 1 percent Native American. The black student body was roughly split between African-Americans and recent immigrants from Somalia, and my high school, which had essentially no Muslims in my day, now had more Muslims than Jews.

In May 2019 I visited Willmar High School to research a column about its transformation since my boyhood and found that its student body comprised young people from some 30 countries across Latin America, the Middle East and Asia — and nearly half the town of 21,000 was made up of Latinx, Somali and other East African and Asian immigrants.

Have no illusions; necessity was the mother of inclusion. Willmar, like so many Minnesota towns, needed workers at all skill levels. But that’s often how walls first get broken down. Towns in Minnesota today that cannot manage diversity know that they will most likely wither. And they are seeing places like Willmar and St. Louis Park, which still have plenty of racial issues to manage, thrive by becoming more diverse.

As I noted in my book, “Minnesota nice” — the state’s informal motto — covered for a lot of structural racism and police brutality over the years, and still does. George Floyd’s death was not a freak event. But it’s also true that the state is full of people who want to get caught trying to reverse that. (Check out the Itasca Project and the Northside Achievement Zone as just two among many examples.) Floyd’s killing has shown them that the effort needs to get into a whole new gear, though.

And that brings me back to our national motto. It was easy to say “Out of many, one” when most of the “many” were white and from Europe and when the black and brown minority was small and formally and then informally not treated as equal members of the “one.”

But as St. Louis Park and Willmar testify, even a state like Minnesota is now just so much more diverse. And like the country, its major cities will become minority majorities over the next two decades. Unfortunately, this new level of diversity, rather than being a source of our strength, has lately become a source of paralysis.

That is how we got into “Out of many, none.”

Our founders created a system of divided powers, but they assumed that politicians would in the end compromise to get stuff done. Lately, however, polarization has become so tribal that compromise is impossible and the system has frozen into a veto machine, the political scientist Frank Fukuyama observed. So, we can’t do anything big or hard — or together — anymore.

“As many people point out, it wasn’t symmetric polarization,” Fukuyama said in a Zoom discussion for The American Interest. “There’s been a shift clearly to the left by the Democratic Party, represented by Bernie Sanders, but the real thing that changed was a shift by the Republican Party to a position that was very unfamiliar to Reagan Republicans, in which the state itself became the enemy for a lot of the Tea Party wing of the party. And then it’s captured by the Trump wing that was kind of an identitarian right-wing nationalist group. And that has led, I think, to the current crisis that we’re in, where fundamental decisions are really deadlocked.”

This paralysis has led some on the right to long for a third motto, “Out of many, me” — or as Donald Trump once proclaimed, “I alone can fix it.” Trump believes that he can simply cut through the paralysis by seizing more executive power, the Constitution be damned, but he is not alone in this view. The leaders of Russia, China, Hungary, Turkey and Brazil all share this authoritarian impulse.

This is a fantasy. The only way we are going to remain America is if our motto becomes “Out of many, we.”

“Out of many, we” acknowledges that “we the people” are now more diverse than ever — that diversity, when it can be made to work, is a tremendous source of resilience, innovation, creativity and renewal. But for that diversity to be a strength again for America, it cannot be based any longer on a white majority learning “tolerance” for nonwhites — the descendants of slaves and immigrants.

Tolerance is important to be sure. But “Out of many, we” summons us all — people of every color — to a deeper commitment to pluralism: a robust appreciation of the distinctive contribution of every community and a commitment beyond rhetoric to make sure that each one has the schools, governance and policing that enables that contribution.

I like how Kay Coles James, the first African-American and the first woman to head the Heritage Foundation, a conservative think tank, put it in a recent essay on Foxnews.com: “It’s time America takes responsibility and expands human flourishing to all of its citizens — not just the majority of them.” (Hat tip to Michael Gerson for quoting this.)

It is clearly the fear of living in such a diverse America that has brought a hard core of whites to stick with Trump no matter what he does and to encourage the Republican Party to try to hold onto power any way possible — through gerrymandering, voter suppression, control of the Senate through sparsely populated non-diverse states, and the courts — in order to keep winning the Electoral College while losing the popular vote.

That is not a sustainable strategy for sustaining America. We need a healthy conservative party in America — one that embraces diversity but offers conservative principles for how to get the most out of it. The G.O.P. can’t just keep trying to hold the presidency through maneuvers while losing the national vote by bigger and bigger margins.

If that continues, America, this great experiment, will eventually just blow apart. And then our tombstone will read: “Out of many — just bits, pieces and fragments.” We can’t let that happen.