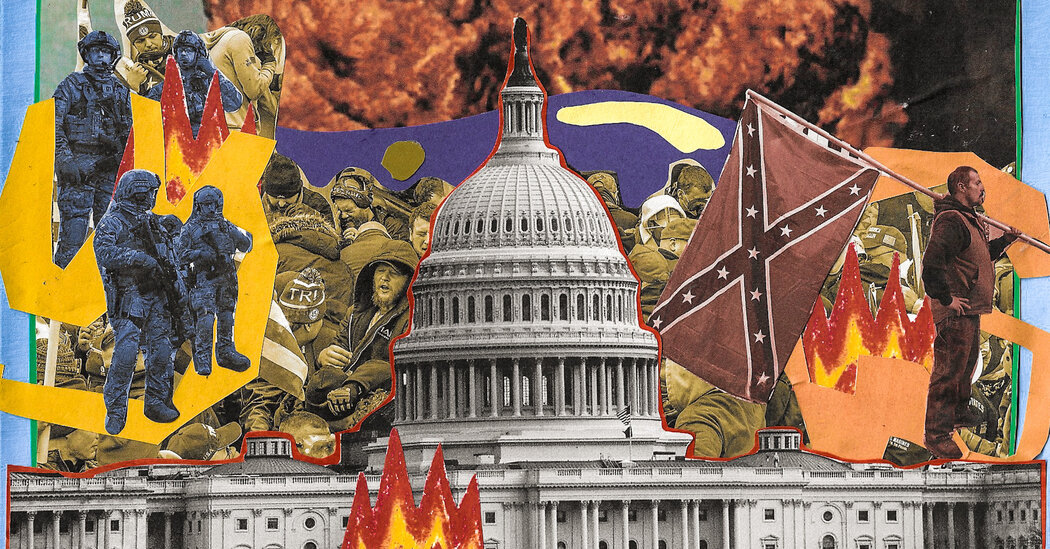 Rather than taking things in stride, I’m still saying, “How dare you?”

The events of Jan. 6 taste as bitter in my mouth as they did the day they took place. Nearly three months later, the simmering bad feeling isn’t boiling over anymore, but it’s still hot to the touch.

This attack on the Capitol feels very personal, and not just because Jan. 6 is my birthday and will never quite be the same. It’s because I saw the attempted coup as the worst-case-scenario conclusion of 12 years of steadily mounting fury over a Black president who had the audacity to see himself as a symbol for all Americans.

Tearing up the Capitol was really a delayed tearing up of Barack Obama’s claim of representation, an attempt to physically desecrate and obliterate the claim all people of color make on Americanness, once and for all.

That attempt was inscribed in so many things — the Confederate battle flag waving inside the Capitol, the racial slurs hurled at Black police officers, the comment by the Republican senator Ron Johnson that he “never really felt threatened” by the rioters, whom he saw as “people who love this country.” Had they been Black Lives Matter protesters, he said, he would have been “concerned.”

So I experienced the event as a direct attack on my own sense of Americanness, which is something I didn’t quite know how much I valued until it was violated in such an ugly and shocking way. I was sure I could commiserate with other Black people about how I felt; surely, I thought, they were taking it personally, too. But what I discovered is that for the most part, they weren’t.

It isn’t that they don’t share my disgust about the events of Jan. 6, or my sense of being insulted. But what the people I’ve spoken to don’t share — what they refuse to have — is my unvarnished emotional response. When I tried recently to vent about the Capitol incursion to a friend, a longtime labor activist, he nodded but also shrugged, his face barely changing expression. Another friend, a fellow journalist and writer, threw up his hands and exclaimed: “Of course! I’m not surprised at all. It’s what’s been happening forever,” and moved on to another topic.

What they and so many other Black people articulate is a well-honed resignation I’ve heard my whole life: America is what it is. Racism is a given, whether you’re talking about the past or the present, and white expressions of racism, from philosophical grumblings about affirmative action to the full-on violence at the Capitol, are simply points along a continuum that has always been active, like a volcano. It’s an attitude best summed up in a question that becomes a refrain among Black people at adverse moments: “What do you expect?”

The answer, of course, is nothing. Conventional wisdom is to expect nothing other than what this country has given us for hundreds of years — a bottom-dwelling spot in the caste system from which we must continually struggle to overcome. I get the survival strategy behind the wisdom: Don’t unravel about the insurrection (or Georgia’s new voter suppression law) because there will always be more and worse things to unravel about. Save the naked emotional response for your own crises, for church, getting a degree, writing a memoir, joining protest.

The point is that white anger is background noise — white noise — that can be noted as needed, but is too amorphous to be engaged. To fulminate about the insurrection is like charging at windmills. Get angry at the system, the wisdom holds — practiced by Black activists from Frederick Douglass to Fannie Lou Hamer to my late father — and take it from there.

Understood. I know “What do you expect?” is more complex than it appears — less a capitulation to reality than a rebuke of our country’s racial failings. It’s a rhetorical question with an edge, one that underneath the fatalism is a serious ask for better, a stoking of collective conscience at moments when conscience is most urgently needed.

I’ve long appreciated — actually admire — the paradox of the question working in tandem with its opposite, idealism, how Black people have always had to position themselves between the hard rocks of history and the alluring horizon of change in order to stay both grounded and moving forward. It’s nothing less than magic.

Yet I can’t help, this time, to expect something different from us. This time, as emotions are running high on all sides and everything is at stake, “What do you expect?” feels like a dereliction. To take clear offense is to have a stake in those things, to stand up.

I see my simmering as progress: Rather than taking things in historical stride, I’m claiming new space in saying, How dare you? Black indignation — part of, but also apart from Black anger — is not an exercise in pointlessness. It is power. It affirms the great American individual right to get incensed not because it will change something, but because what you see is eminently immoral and wrong on a micro level, and how you feel about it matters. Black people have fought hard and long to matter, and I prefer in 2021 to act as if we won that fight, even as it continues.

Winning a fight doesn’t mean feeling good. To tell the truth, I’d rather be sanguine than worked up about Jan. 6; I’d have more company, and less stress. But sublimating my outrage — and pain, bewilderment, even despair — is a norm that, like so many norms of 2020, probably shouldn’t come back. We need to move on.