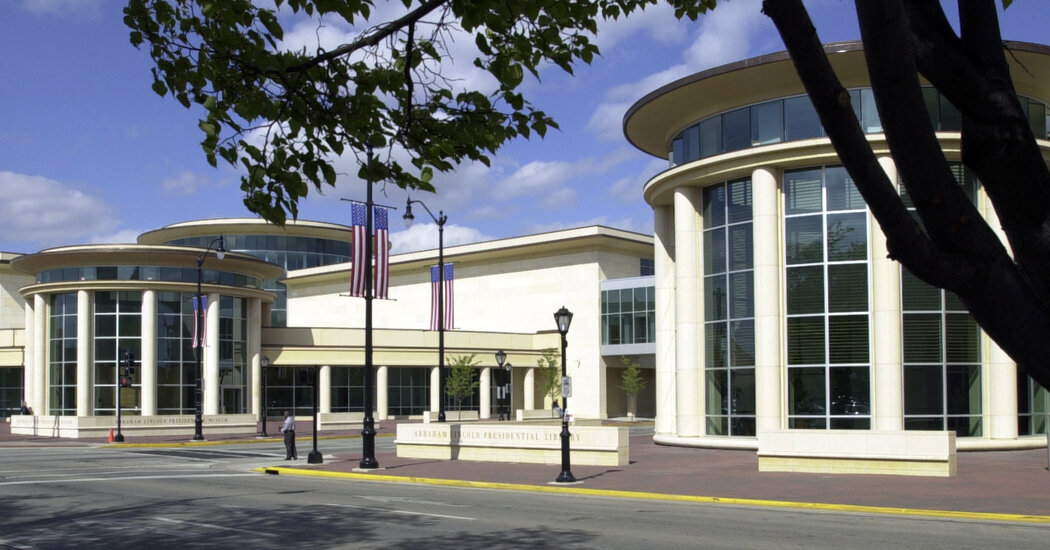 The exhibition on domestic terrorism had been on tour since 2006 and had previously been displayed at four presidential libraries and museums, including the George H.W. Bush Presidential Library and Museum in College Station, Texas, last year.

But in recent weeks the Abraham Lincoln Presidential Library and Museum in Springfield, Ill., canceled the exhibition’s engagement there, citing concerns from visitors of color who had previewed it and determined that several of the displays were outdated or lacking in context.

“We concluded that updating another institution’s exhibit was not a wise use of our time and resources,” the museum said in a statement.

The exhibit, created by the International Spy Museum in Washington, had been scheduled to open at the Lincoln museum in late March, but the coronavirus scuttled those plans.

The chairman of the museum’s board of directors, Ray LaHood, said that in the weeks before the museum’s July 1 reopening, staff members expressed concern about two aspects of the exhibition: three Ku Klux Klan robes on display and a section about the internment of Japanese-Americans during World War II.

The museum invited between 40 and 50 Black community leaders to preview the exhibition, “Spies, Traitors, Saboteurs: Fear and Freedom in America,” in late June and offer feedback, a spokesman, Chris Wills, said.

The comments, Mr. LaHood said, were overwhelmingly negative. “They were clear that this was not the kind of exhibit they wanted to see at the Abraham Lincoln Presidential Library and Museum,” he said. He said the board members concurred and unanimously decided to cancel it.

Mr. LaHood said that while the show had been received without objection at presidential libraries and museums devoted to Bill Clinton, Gerald Ford, George H.W. Bush and Richard Nixon, it was a poor fit for the Lincoln institution. (Unlike the other four museums, the Lincoln library is not part of the U.S. presidential library system run by the National Archives and Records Administration.)

“It does not reflect the life and legend of Abraham Lincoln, who was the president who ended the Civil War and freed the slaves,” he said.

The show includes three Ku Klux Klan robes, two adult and one child-size, under a placard reading “HATE 1865-PRESENT.” Historic documentary footage of a Klan march plays on a monitor behind the robes.

The exhibition, which chronicles terrorism in America from the Revolutionary War to the present, also includes pieces of the planes that hit the World Trade Center and displays about the 1971 bombing of the Senate wing of the U.S. Capitol building and the 1995 bombing of the Alfred P. Murrah Federal Building in Oklahoma City.

Kathryn Harris, a Lincoln museum board member who attended a preview, said the way the Klan robes are displayed is unnecessarily jarring. “They hit you in the face as soon as you walk in,” she said. “There’s a warning that says ‘Sensitive Material,’ but ‘Offensive Material’ would have been a better choice of words.”

Ms. Harris also said displays about the Black Panther Party and the internment of Japanese-Americans are one-sided. The Black Panther Party section, she said, discusses the group’s militancy, but not the organization’s tutoring and feeding programs. And she said the internment section omits the fact that Japanese-Americans later received reparations.

Alexis Albion, the curator of special exhibits at the Spy Museum who helped create the show in 2005, said that this was the first time objections had been raised about it. It had previously been displayed at 20 institutions, including the Illinois Holocaust Museum and Education Center in Skokie and the National Underground Railroad Freedom Center in Cincinnati.

Ms. Albion said she was puzzled by the complaint that the Klan artifacts lacked context. “We labeled the section that deals with the Klan ‘HATE,’” Ms. Albion said. “There are a dozen labels that very clearly state exactly what they did, from intimidation to murder.”

Doris Turner, a member of the Springfield City Council who previewed the exhibit, said that she was troubled by the focus on negative aspects of organizations like the Black Panthers. “There were some glaring omissions that didn’t provide some of the most positive aspects of some of the subjects,” she said.

Anna Slafer, the vice president of exhibitions and programs at the spy museum, said that the section Ms. Harris and Ms. Turner objected to did not focus on the Black Panther Party, but on the Black Liberation Army, an offshoot created by Panthers frustrated with what they considered the group’s conservative tactics. “They were considered a radical terrorist group and weren’t doing any of the positive things the Panthers were,” she said.

Ms. Slafer also said that the section about internment included information about President Reagan signing the Civil Liberties Act of 1988 and offering survivors a government apology and compensation.

Though curators differ about the propriety today of an exhibition created with sensibilities framed by events of 15 years ago, experts said the difference of opinion reflects the heightened concern over the effects of museum displays, whatever their intentions.

“I think people are realizing the emotional impact that seeing reminders of oppression has on people of color,” Erin Thompson, an art historian who studies the destruction of cultural heritage, said. “What had been thought of as a merely educational display is now recognized as something that can reopen traumas.”

This is the second time this year that the work of the spy museum has drawn objections. After members of the Senate Intelligence Committee criticized the museum in January for “sanitizing” torture techniques in an exhibition about the “enhanced interrogation” program the C.I.A. used after 9/11, the museum revised that show.

Mr. Wills said the library is seeking a refund of the $70,000 it paid to display the artifacts through January 2021.

Ms. Slafer said the exhibit has not been booked by another institution, but has not been taken out of touring commission, either. Currently, she said, the museum has no plans to update it.

“It was meant to get people talking about the issues,” she said. “And so, far from being outdated, it’s more relevant than ever.”