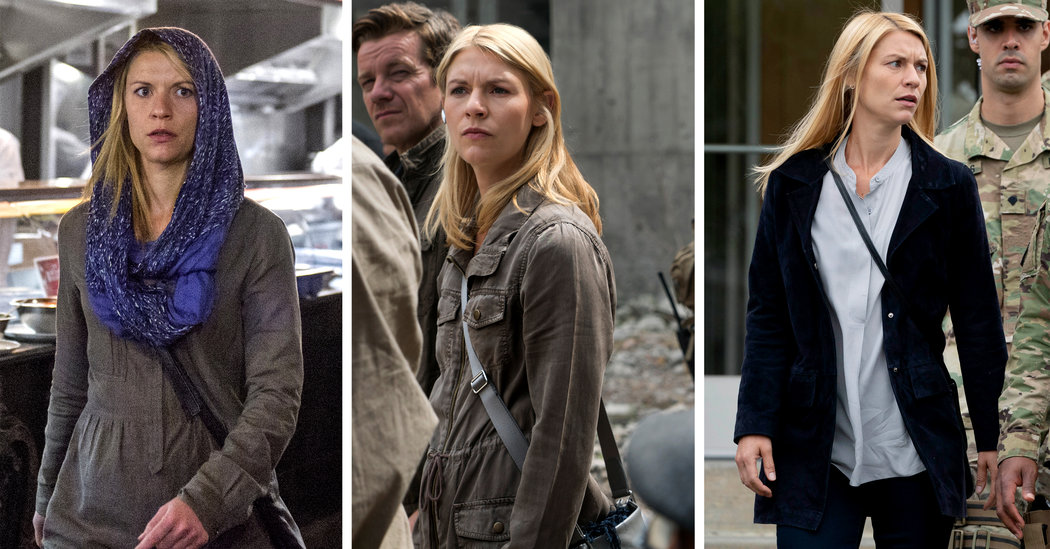 Carrie Mathison’s very first words on “Homeland” are: “I don’t care where he is. Find him. It’s urgent.”

They are shouted in a tone of unvarnished scorn at her colleague’s slowness, lack of insight and imagination. Carrie Mathison, a C.I.A. agent played by Claire Danes, does not mince words. She does not avoid conflict or difficult feelings. In fact, she has bipolar disorder (sometimes untreated, according to story-line needs), so difficult feelings are actually her thing.

Many (dudes, mostly) are put off by her dogged, sawing pursuit of truth, and distrust the instincts born behind her beautiful spinning eyes. They are always institutionalizing her, always wrong, and she is always getting out of the institution to prove it. She is also a single mother.

Bottom line: Carrie Mathison has her hands full, and never goes anywhere without her cross-body bag.

“Does Carrie take her bag from the car to wherever she was going, or whomever she was interrogating?” Ms. Danes said over email of her character’s bags. “The shorthand for this question was always, ‘Does she take her friend?’ Occasionally, it was a more explicit ‘best friend,’ but never necessary because the lack of competition was a given.”

I like Carrie Mathison. I love Claire Danes. I detest cross-body purses.

You see, I like a nice solid shoulder bag, a hobo, a doctor bag, a tote, like the deep green Prada Issa Rae carries in her first scene in “The Photograph.” That’s a bag, people. Good bags elevate the beauty of women onscreen and in person, whereas cross-body bags erase, with their placement on the body, all beauty, all sexuality, all sensuality, all grace, all style, all life.

Cross-body bags cut the form in a half, and the purse itself is so silly-looking, so flimsy. Also, if all you need to carry are your phone and your debit card, why don’t you just put them in your pocket?

When I told this to Katina LaKerr, the costumer designer who created Carrie’s look on “Homeland,” she just laughed. “Carrie is a superhero,” Ms. LaKerr said. “A cross-body bag is the only choice.” I didn’t argue. But that doesn’t mean I will let this go.

The series finale of “Homeland” airs on April 26, after eight seasons. If you rewatch the show purely for bag spotting (it happened to me), you will start to recognize the main players.

Carrie starts out with a nondescript black one with a flap, but Ms. LaKerr refined this look into a Marc by Marc Jacobs cross-body with subtle but sturdy gold hardware that became, by the middle of Season 3 and onward, a Carrie staple. A gray cross-body, its provenance sadly lost to the sands of time, accompanies Carrie through much of Season 5, in Berlin.

Now, in Kabul, Afghanistan, for Season 8, she carries a black Le Donne, and as Carrie ends the show’s run, she’ll be back in the United States, carrying a more sophisticated Rag & Bone. “We always keep track of which bags might no longer exist, due to events in the story line,” said Debra Beebe, the show’s current costume designer.

When I told Ms. Beebe that I don’t like cross-body bags, she also said that Carrie’s job demands them, a point that I’m willing to concede. But many women who are not Carrie Mathison, who never hit people over the head with bricks, who don’t get repeatedly kidnapped, wear cross-body bags, and what, exactly, is their problem?

“They are just everywhere,” said Maria Sherman, a writer, whose 2019 Jezebel piece “Why Are All Bags Crossbody Bags Now?” chronicles her fruitless search for a not-cross-body bag and is the “Howl” of purse shopping. “Cross-body bags are supposed to be cool but I feel like they lack dignity,” she added. “Carrie might as well be wearing a backpack, or a fanny pack.”

I told her how uncomfortable it makes me to have a drink or coffee with someone who leaves hers on the entire time (it happens more than you’d think); I can never shake the feeling that this person is always on the verge of getting up and walking out.

Clare Vivier is the founder and C.E.O. of Clare V, a high-end purse company. Though she has unfettered access to some of the most beautiful bags in the world, she voluntarily owns nine of the cross-body variety, and said they’re extremely popular with her customers.

She does have one cross-body bone to pick: “Carrie wears hers too long. It actually drives me crazy.”

“Women these days want to be chic, but comfortable and without impairment, so that we can tackle our harried lives, whether we are working moms or fighting terrorists,” she said. “Cross-body bags are a hands-free bag equivalent to sneakers with skirts — sporty but feminine.”

Now, I have watched every single episode of “Homeland,” not only in spite of Carrie’s bags, but in spite of something infinitely more troubling: It centers the 20-year-long wars in Iraq and Afghanistan on American angst. It’s as if, with the hundreds of thousands of Afghans and Iraqis who died in these wars, the real battles were in the American intelligence community.

I thought about how Carrie Mathison — working mom and terrorism fighter — loved the convenient hands-free cross-body bag. And I had to wonder (to invoke another television Carrie, of “Sex and the City”), could the bags and the show’s politics be related?

I talked to Stephen Shapiro, a professor of English at the University of Warwick, in England, who has written on “Homeland,” prestige television and its messages about culture and class relationships. He suggested that the cross-body bag is about a lot more than convenience.

“The bag seems to be taking its cue from military uniforms, and it’s evocative, the same way that the prevalence of S.U.V.s are, of the way that the Forever War let us copy the military in our everyday lives,” Mr. Shapiro said.

Obviously, S.U.V.s aren’t military vehicles, but they have the same shape and heft. “When you see someone driving one,” Mr. Shapiro said, “you wonder if they are worried about running over an I.E.D. in the Target parking lot.” I have the same sensation looking at people wearing cross-body purses: What, exactly, do you feel you need to be prepared for?

“To me, cross-body bags are so Elizabeth Warren feminist,” said Amy Westervelt, a climate writer, and a friend of mine. “They say to me: ‘We’re going to solve climate change by greening the military.’”

Then there’s the whole hands-free thing, particularly notable since there’s a major story line around Carrie ordering a drone strike, and drone strikes are how Americans themselves have been able to be involved in this war, while often never touching or being touched by it.

“The costume of a hands-free bag presents Mathison as innocent of dirty deeds,” Mr. Shapiro said. “These bags say, ‘My hands are clean.’”.

Of course, I myself am not innocent. I saw every single episode the moment it came out, for all nine years. I just loved watching Carrie show all those sane, yawningly right-brained people how much better she, an electrically left-brained person, was than they were. Despite the casualties, I couldn’t stop watching. You could say it was out of my hands.

And I will be watching all the way to the end, partly because I want to, partly because what else am I going to do, and partly because Ms. Beebe promised me that in one of the last episodes, Carrie goes to an event carrying a Tissa Fontaneda evening — not cross-body — bag.

I can’t wait to see this bag. The spoils of empire are so beautiful, and never more so as they dwindle away.

Sarah Miller is a writer who lives in Nevada City, Calif.