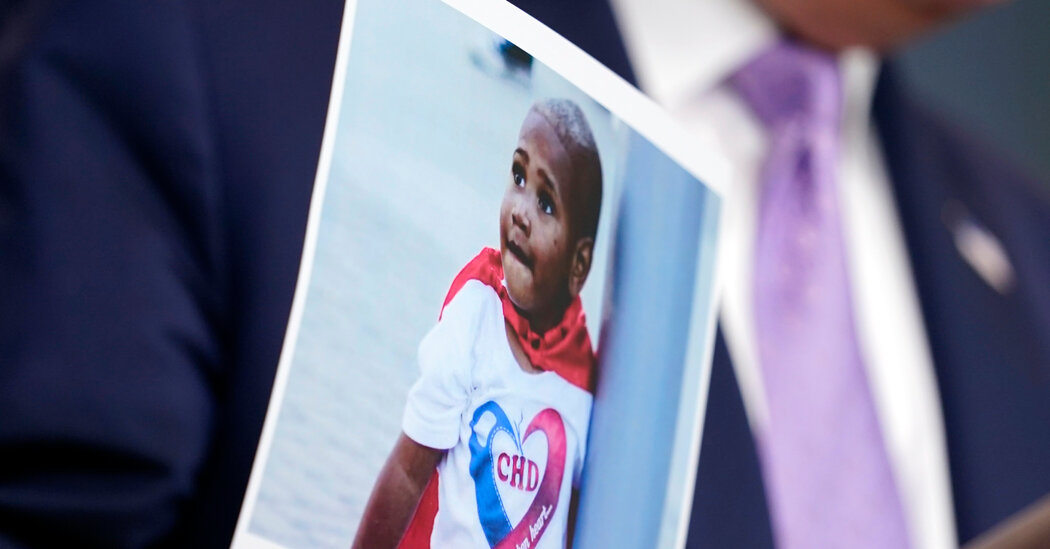 The authorities said on Thursday that they had arrested and charged a man with killing LeGend Taliferro, a 4-year-old boy from Kansas City, Mo., whose shooting death led the Justice Department to begin an operation in his name that sent hundreds of federal agents into cities to confront a rise in violence.

The man, Ryson Ellis, 22, of Kansas City, was charged with second-degree murder, unlawful use of a weapon and two counts of armed criminal action, according to Jean Peters Baker, the prosecutor in Jackson County, Mo. LeGend was killed on June 29 when a shot was fired into an apartment in Kansas City and struck him while he slept, the authorities said.

Last month, President Trump and Attorney General William P. Barr announced that Operation Legend, named for the child, would send agents from the F.B.I., the United States Marshals Service, the Drug Enforcement Administration and other agencies to at least six cities, beginning with Kansas City, in an effort to stem violent crime.

Mr. Trump, who has sought to make “law and order” a campaign theme and has denounced “Democrat-run cities” as he seeks re-election, painted a grim picture of bloodshed in urban America as he announced the operation at the White House, where he was joined by LeGend’s parents and grandparents.

Speaking at the White House on Thursday, Mr. Trump welcomed the arrest of Mr. Ellis and held up a photograph of LeGend, whom he called a “wonderful young man.”

“As you know, we named Operation Legend after LeGend Taliferro, where we’re going to be helping out, and are in the process of helping out, the cities throughout our country that have difficulty with crime, in particular certain types of crime,” Mr. Trump said. “So that’s really good news — they caught the killer of LeGend.”

In a statement on Thursday, Mr. Barr said the arrest “marks a significant step forward in his case and illustrates the potential of Operation Legend more broadly.”

“Inspired by this success, federal law enforcement will continue working tirelessly to support state and local partners in our shared mission to keep the American people safe and enforce the rule of law,” he said.

The mayor of Kansas City, Quinton Lucas, a Democrat, said last month that he was surprised by the announcement about the operation, which he said he had learned about on Twitter. He said he welcomed help in solving crimes but was worried that the federal agents might end up being political props.

Kansas City, which is on pace to shatter its record for homicides in a year, is among a number of cities that have experienced an increase in killings. But nationally, crime remains at or near a generational low, and experts have cautioned against drawing conclusions from just a few months of data.

Interventions by federal law enforcement officials in cities have also drawn intense scrutiny amid protests over the killing in May of George Floyd in the custody of the Minneapolis police and the deployment of Department of Homeland Security agents in camouflage uniforms to confront protesters in Portland, Ore.

Although LeGend’s death prompted a surge in federal resources, Mr. Ellis was ultimately arrested by the Kansas City Police Department after eight detectives worked tirelessly on the case, according to the police. Local law enforcement officials worked with federal agents on the investigation, as they do in many criminal cases.

“While my heart continues to break for LeGend’s family, I am thankful that today an important step towards justice has been taken,” Mr. Lucas wrote on Twitter on Thursday. “Thank you for the hard investigative work of the women and men of law enforcement and the prosecutors with a heavy task ahead.”

Speaking at a news conference with local and federal law enforcement officials in Kansas City on Thursday, LeGend’s mother, Charron Powell, thanked investigators for their work on her son’s case.

“I’m so grateful that we are in the steps to justice,” she said.

But Ms. Powell said it was important for the community to recognize that a 22-year-old, Mr. Ellis, had been jailed as a result of the investigation.

“So, in reality, this is a lose situation for my family, including his,” she said. “So, as a community, I appreciate you guys for stepping up. But now we’ve got to take it a step farther and help calm the violence down.”

LeGend was killed as he slept on the floor when a shot was fired from behind an apartment, through a wood fence and a sliding-glass door, prosecutors said.

Prosecutors said court records showed that a woman who was in the apartment at the time had told the police that she had a son with Mr. Ellis and that Mr. Ellis had assaulted her a few days before the shooting.

The woman said Mr. Ellis had then sent her threatening messages on social media. The assault prompted members of the woman’s family, including LeGend’s father, to confront Mr. Ellis, according to prosecutors. The woman, who was not identified by prosecutors, was not Ms. Powell, according to Ms. Peters Baker’s office.

Mr. Ellis was driven to the apartment in a rental car, which was captured on surveillance video, according to prosecutors. The woman who drove the car told the police that Mr. Ellis had gotten out of the vehicle near LeGend’s apartment and that she had heard gunshots before Mr. Ellis ran back to the car, according to prosecutors. The woman said she hadn’t found out until later that someone had been killed.

It was not immediately clear if Mr. Ellis had a lawyer. His mother, Joanice Walker, said on Thursday that her son had not been alone when the shooting happened.

“We seek to find justice for the family of LeGend, and it’s a sad situation, and never would I hold my son unaccountable for anything that he has done,” she said in a phone interview. “I’m a mother, I’m a grandmother, and I do understand. Hopefully, we can take this to trial so they can understand there’s more to the story than just what people have said.”