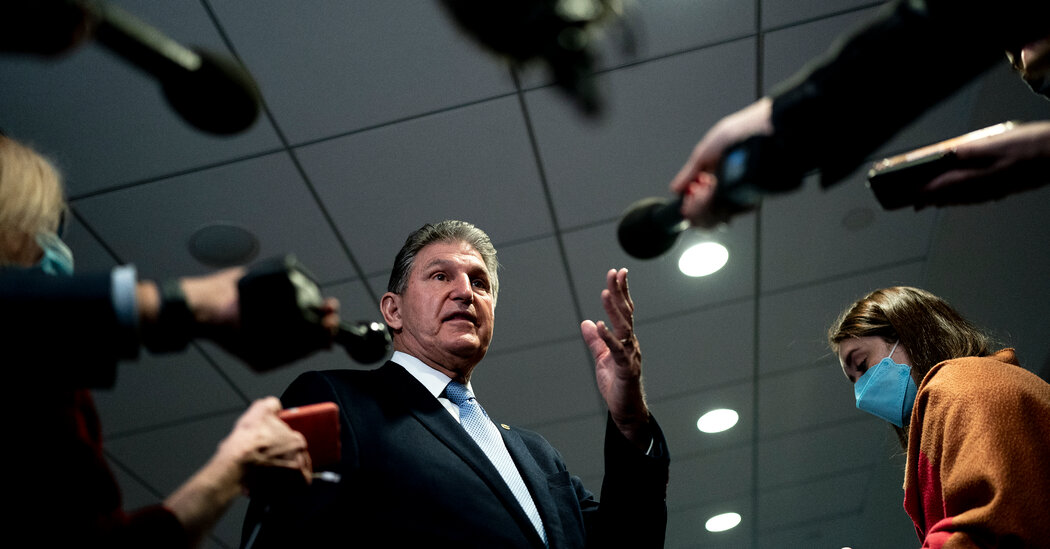 WASHINGTON — Senator Joe Manchin III of West Virginia, the most prominent Democratic holdout on President Biden’s $2.2 trillion social safety net, climate and tax bill, cast fresh doubt on Monday on his party’s plans to speed the measure through the Senate before Christmas, saying he still had grave concerns about how it would affect the economy.

Mr. Manchin outlined his skepticism before speaking by telephone about the bill with Mr. Biden, a discussion that aides to both later characterized as positive. After the call, Mr. Manchin, who represents West Virginia, did not rule out the possibility of supporting the measure this month. He said that “anything is possible here” when asked about a vote before Christmas, and that he was still “engaged” in conversations with the White House.

But in a 50-50 Senate where Democrats would need all of their party’s votes to push through the legislation over unanimous Republican opposition, Mr. Manchin’s reluctance to embrace it has helped freeze the measure in place.

“People have been in a hurry for a long time to do something, but I think, basically, we’re seeing things unfold that allows us to prepare better,” Mr. Manchin told reporters outside his Capitol Hill office on Monday, before the conversation with Mr. Biden. “And that’s what we should do.”

Mr. Biden and Mr. Manchin spoke by phone on Monday afternoon, in what Jen Psaki, the White House press secretary, described as “a conversation between two people who have been in public life for some time and have had good-faith discussions directly.” Few details were offered about the conversation, though a spokeswoman for Mr. Manchin declared it “productive” and said talks would continue.

The conversation came after data released on Friday showed that prices were rising at the fastest pace in nearly 40 years amid persisting inflation. Mr. Manchin called the current trend “alarming” and cautioned that “whatever we’re considering doing, or whatever Congress is considering doing, they should do it within the limits of what we can afford.”

His trepidation stands in contrast to the impatience of his Democratic colleagues, who are eager to end the year with a legislative triumph. That ambitious timeline, according to lawmakers and aides, would also ensure that an expanded monthly payment to most families with children would be extended and would not lapse at the end of the year.

“There’s nothing more to be gained from more talk,” said Senator Elizabeth Warren, Democrat of Massachusetts. “We have talked and talked and talked. It’s time to make some final decisions and vote.”

In a speech on the Senate floor on Monday, Senator Chuck Schumer of New York, the majority leader, said he still intended to push the bill through before Christmas, which would send it back to the House for final approval.

“This remains a laborious process, requiring a lot of precision and a lot of pieces moving together,” Mr. Schumer said. But, he added, “we’re working hard to put the Senate in a position to get the legislation across the finish line before Christmas.”

Regardless of whether Democrats have secured a commitment from Mr. Manchin, the legislation itself is far from complete.

The Senate Finance Committee, for example, released updated text over the weekend for its component of the legislation but left unfinished a proposal to lift the cap on how much can be deducted in state and local taxes, which senators are still negotiating.

Democrats are also still waiting for guidance about which parts of the bill may have to be removed because they violate Senate rules, including immigration provisions that many of them regard as a top priority. Senator Ron Wyden of Oregon, the chairman of the Finance Committee, said his panel alone was litigating more than 20 issues.

The centerpiece of Biden’s domestic agenda. The sprawling $2.2 trillion spending bill aims to battle climate change, expand health care and bolster the social safety net. Here’s a look at some key provisions and how they might affect you:

Paid leave. The proposal would provide workers with four weeks of paid family and medical leave, which would allow the U.S. to exit the group of only six countries in the world without any national paid leave. However, this provision is likely to be dropped in the Senate.

Health care. The bill’s health provisions, which represent the biggest step toward universal coverage since the Affordable Care Act, would expand access for children, make insurance more affordable for working-age adults and improve Medicare benefits for disabled and older Americans.

Climate change. The single largest piece of the bill is $555 billion for climate programs. The centerpiece of the climate spending is about $320 billion in tax incentives for producers and purchasers of wind, solar and nuclear power.

Taxes. The plan calls for nearly $2 trillion in tax increases on corporations and the rich. The bill also raises the cap on how much residents — particularly in high-tax blue states — can deduct in state and local taxes, undoing the so-called SALT cap.

The measure is moving through Congress under a fast-track process known as budget reconciliation, which shields fiscal legislation from a filibuster but is subject to stringent restrictions. Republicans can challenge any component of the bill, and the Senate parliamentarian, the chamber’s top rules enforcer, is still considering which are valid.

But much of the public focus has fallen on Mr. Manchin, whose sign-off is needed to move forward.

Republicans are working to validate his concerns about the bill’s budgetary and economic impacts. Senator Mitch McConnell of Kentucky, the minority leader, has repeatedly said he prays for both Mr. Manchin and Senator Kyrsten Sinema of Arizona, another key Democratic holdout.

That has extended to painting elaborate pictures of what Republicans consider a worst-case fiscal future if the bill passes. They have pointed to an analysis by the Congressional Budget Office that found that the proposals in the package would add about $3 trillion to the nation’s deficit if extended indefinitely. (Many of the bill’s provisions, like universal prekindergarten and an expanded tax credit for parents, expire before the end of the decade.)

“The one-two punch of the C.B.O. score, showing the bill to be much more expensive, and record high inflation after 40 years, I think will give Senator Manchin great pause,” said Senator Lindsey Graham of South Carolina, the top Republican on the Budget Committee, adding that he had personally spoken to Mr. Manchin about the analysis.

Mr. Manchin called the report “very sobering” and said he would discuss it with Mr. Biden.