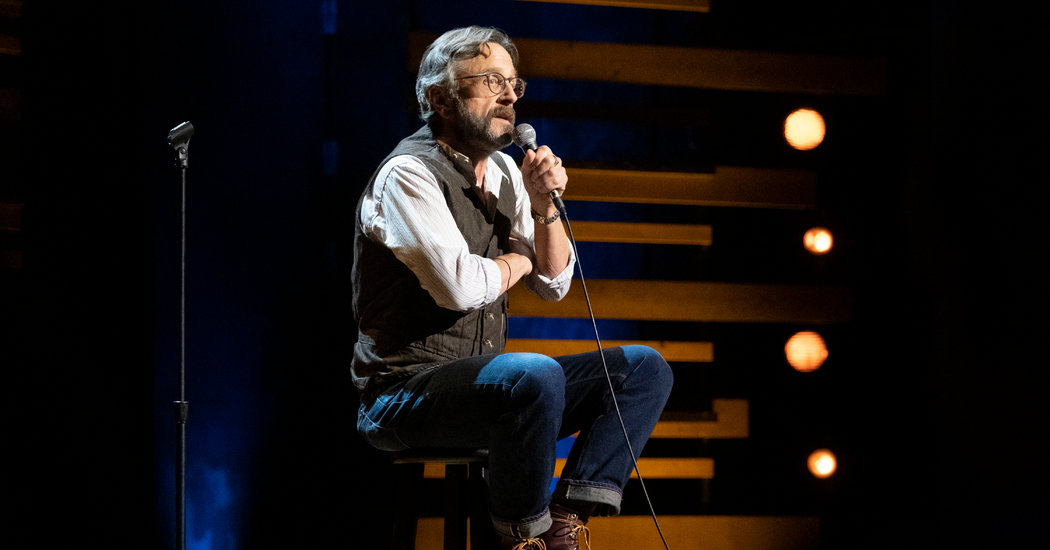 For instance, last year, around the same time that the coronavirus invaded the human population, Marc Maron stood onstage in Los Angeles and asked: “Isn’t there something that could bring everyone together and realize we have to put a stop to like almost everything? What would it take?” Then he answered his own question: “Something terrible. That’s what brings people together. Nothing good.”

In “End Times Fun,” released on Netflix last week, Maron, 56, imagines doomsday scenarios with baroquely grim imagery: skies aflame, waters rising, lizard infestations, melting faces, technological singularity. His apocalyptic mood might have once seemed like typical hyperbole, the latest gloom and doom from a neurotic progressive in the age of Trump, but it now has the thundering resonance of prophecy. Maron meets the moment not just because we are all inching closer to his dark worldview, but also because he’s the rare comedian to ask the really big questions, the existential ones that take on more urgency in a crisis.

When people are frightened, as they are now, they often turn to religion, which for Maron, doesn’t only mean prayer or visiting houses of worship. In the first show I saw of his in 2000, “Jerusalem Syndrome,” he described Disney, Microsoft and other corporate giants as our new gods, calming fears and providing comfort — for a price, of course. He also has repeatedly poked fun at his own shaky devotion. “I think I’m spiritual, maybe not,” he said in a previous special, summing up a certain brand of faith in a secular age.

“End Times Fun,” a state-of-the-nation special, is his most ambitious production, sometimes to a fault, veering from reflective to raunchy, covering everything from the anti-vaccination and #MeToo movements to evangelical politics. Some of his premises, about the shadiness of Trump or the sexuality of Pence, are too familiar. What stands out is his anchoring theme: a skepticism of unshakable belief of any kind.

Speaking in a deadpan that gets raspier the longer the sentence goes, Maron, who wears jeans, a vest and a bushy beard, has left his old anger behind. He sounds more seen-it-all weary, impatient with anyone who thinks they have answers, including his fellow podcaster Joe Rogan, whom he needles for selling health supplements before saying he’ll get some flak about it online from “the monoculture of freethinkers,” a salvo that seems aimed at the class of commentators and comics reflexively at war with political correctness. Maron describes himself as “85 percent woke, the other 15 percent I keep to myself.”

He singles out three major American religions: Fox News, Christianity and the Marvel Universe. He spends the least time with Fox, while he is quick to point out that Marvel and Christianity were both “created in Jewish writers’ rooms.” In Jewish comedy, pride has always hidden right underneath self-hatred, a paradox Maron examines (and inhabits) as well as anyone.

After three and a half decades in comedy, Maron has evolved into a sneakily clever joke mechanic. Smuggling punch lines into asides or seeming tangents, he attempts to approximate more of a conversation than a setup-and-punch line structure, one full of Socratic dialogues, short stories and barroom theories. Sometimes he seems more interested in a literary flourish than a belly laugh. His final joke is not hilarious but it calls back to no fewer than four different ones from the previous hour. In earlier specials, he almost fetishized spontaneity, but his work now is more overtly writerly, intricate and structured.

Over the years, Maron has been on several comedy vanguards, from the birth of the alt scene in the 1990s to the podcast revolution more than a decade ago, but with age and success, he has become firmly part of the establishment, a television star whose podcast is as likely to feature Brad Pitt gushing over the host’s self-titled IFC show as a scrappy comic talking shop. (Full disclosure: I have appeared on it, and on a recent episode, he discussed me reviewing his special, the first time I have received a review invite by podcast.) Maron is now the old guard. It’s not uncommon to hear young comics poke fun at him. It’s part of the price you pay for a decade of nostalgizing in public as well as the inevitable hypocrisies you engage in if you live long enough. Maron hates comic-book culture, but of course he appeared in the movie “Joker.”

Experience should humble you. And in an era of righteous certainty and flamboyant superficiality, what sets this special most against the grain is its commitment to doubt. He begins by imagining himself on the couch at a loss, wondering whether he can trust the few things he thinks he knows, which, in his accounting, number seven. When Maron says “I don’t know what’s happening, but it’s pretty clear the world is coming to an end,” the first part is just as important as the second. Comics tend to speak with authority on whatever subject they are hammering away on, but Maron keeps explaining how little he knows what he knows. The shaky ground that truth sits on is a rich subject in an age of disinformation and charges of fake news.

With an assured hold on the material, the special’s director, Lynn Shelton (who also directed him in the 2019 indie comedy “Sword of Trust”), underlines the theme of the slipperiness of truth by constantly shifting views of the comic, adopting a multiplicity of shots and angles, most intimate, none taken from below or on high to give the impression of power or omniscience. Her visuals tell a story: There are many different ways to look at the same thing.

At the end of one Maron’s riffs, he turns to the audience and says “Am I right?” This rhetorical device has become a comedy cliché, but he breathes new life into it merely by saying it with conviction. It’s rare to hear a comic seem like he actually wants to know. But he doesn’t. It’s a setup to the real message of this comic sermon that follows, a refrain that echoes what a lot of people feel about the state of things right now. Answering his own query yet again, Maron says, “I don’t really know.”