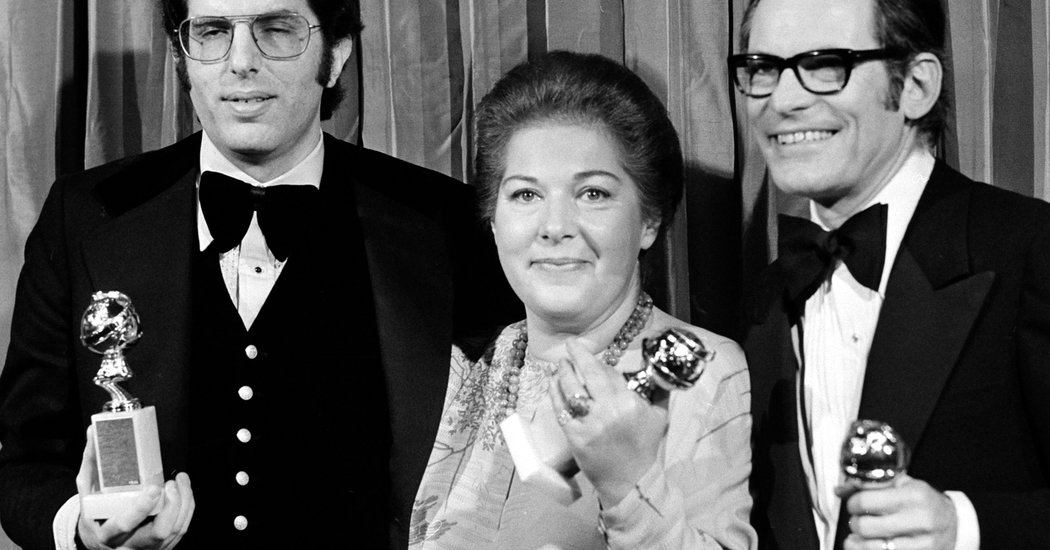 With her husband, Alan, she wrote the lyrics to “The Way We Were” and “The Windmills of Your Mind,” as well as a number of memorable TV themes.

Marilyn Bergman, who with her husband, Alan Bergman, gave the world memorable lyrics about “misty watercolor memories” and “the windmills of your mind” and won three Academy Awards, died on Saturday at her home in Los Angeles. She was 93.

A spokesman, Ken Sunshine, said the cause was respiratory failure.

The Bergmans’ lyrics, set to melodies by composers like Marvin Hamlisch and Michel Legrand, were not everywhere, but it sometimes seemed that way. For many years their words were also heard every week over the opening credits to hit television shows like “Maude,” “Good Times” and “Alice.”

The Bergmans and Mr. Hamlisch won the 1974 best-song Academy Award for “The Way We Were,” from the Robert Redford-Barbra Streisand romance of the same name. (The album of that movie’s score also won the Bergmans their only Grammy Award.) Their other best-song winner, “The Windmills of Your Mind” (“Round, like a circle in a spiral/Like a wheel within a wheel”), was written with Mr. Legrand for the 1968 film “The Thomas Crown Affair.” Their third Oscar was for the score of Ms. Streisand’s 1983 film “Yentl,” also written with Mr. Legrand.

Aside from the Oscar winners, their other popular songs included the title track of Frank Sinatra’s album “Nice ’n’ Easy,” written with the songwriter Lew Spence; the poignant ballad “What Are You Doing the Rest of Your Life,” from the 1969 movie “The Happy Ending,” with music by Mr. Legrand; and “Where Do You Start?,” written with Johnny Mandel and covered by artists like Tony Bennett, Michael Feinstein and Ms. Streisand.

Ms. Streisand released an album of the Bergmans’ songs, “What Matters Most,” in 2011. The compilation “Sinatra Sings Alan & Marilyn Bergman” was released in 2019.

Television was a significant part of the Bergmans’ careers as well. They won three Emmy Awards: for the score of the 1976 TV movie “Sybil,” written with Leonard Rosenman; the song “Ordinary Miracles,” written with Mr. Hamlisch and performed by Ms. Streisand in a 1995 concert special; and “A Ticket to Dream,” another Hamlisch collaboration, written for the American Film Institute’s 1998 special “100 Years … 100 Movies.”

But their lyrics were probably heard far more often by viewers of popular late-20th-century television series. They wrote the words to the bouncy theme songs for the hit sitcoms “Maude,” “Alice” and “Good Times,” as well as the themes for the nostalgic comedy series “Brooklyn Bridge” and the drama series “In the Heat of the Night.” Their hit “You Don’t Bring Me Flowers,” best known as a duet by Neil Diamond (who wrote the music) and Ms. Streisand, was originally written for Norman Lear’s short-lived series “All That Glitters.”

Early in her career, Ms. Bergman was one of relatively few women in the songwriting business. In a 2007 interview with NPR, she recalled attending meetings of the performance rights organization ASCAP (the American Society of Composers, Authors and Publishers) at which the only women “would be me and a lot of the widows of songwriters who were representing their husbands’ estates.” She was the first woman to serve as president of ASCAP, a position she held from 1994 to 2009.

Marilyn Katz was born on Nov. 10, 1928, in the same Brooklyn hospital where Alan Bergman had been born four years earlier. The daughter of Edith (Arkin) and Albert Katz, she attended the High School of Music and Art in Manhattan, now LaGuardia High School of Music & Art and Performing Arts.

A school friend introduced her to an uncle, Bob Russell, who wrote the lyrics to the Duke Ellington hit “Don’t Get Around Much Anymore” and would later write the lyrics to “He Ain’t Heavy, He’s My Brother.” Marilyn regularly went to his home after school to play piano for him as he wrote.

By the time she had earned a bachelor’s degree in psychology and English from New York University, she had set aside ideas of a music career and planned to become a psychologist. But a fateful accident sent her back to the arts.

In 1956 she fell down a flight of stairs and broke her shoulder. Seeking help during her recuperation, she flew to Los Angeles to stay with her parents, who had moved there. So had Mr. Russell, and when she looked him up he suggested that she do some songwriting herself. Unable to play the piano because of her injury, she recalled many years later, she could not compose and so decided to write lyrics instead.

Working under the name Marilyn Keith, she took a job with Mr. Spence, who also worked with Alan Bergman. Mr. Spence introduced the two, and their musical partnership began immediately. They were married two years later.

Asked in 2010 on the television program “CBS News Sunday Morning” how she and Mr. Bergman managed to work together while staying married, she said: “The way porcupines make love. Carefully.”

Ms. Bergman’s husband survives her, as do their daughter, Julie Bergman, and a granddaughter.

In a 2002 interview with American Songwriter magazine, Ms. Bergman defined the difference between an amateur and professional songwriter as “the ability to rewrite” and “not to have fallen so in love with what you have written that you can’t find a better way.”

The Bergmans were inducted in the Songwriters Hall of Fame in 1980 and jointly received a Trustees Award from the National Academy of Recording Arts and Sciences in 2013.

Although best known for their movie and television work, the Bergmans did try writing for the Broadway stage, although they did not have much success. “Something More!,” starring Barbara Cook and Arthur Hill, for which they wrote the lyrics and Sammy Fain wrote the music, lasted less than two weeks in 1964. They fared better, but not by much, in 1978 with “Ballroom,” an adaptation of the 1975 TV movie “Queen of the Stardust Ballroom” with music by Billy Goldenberg. Despite being produced and directed by Michael Bennett, whose previous Broadway show had been the monster hit “A Chorus Line,” “Ballroom” closed after three months.

“Our experiences in the theater and film,” Ms. Bergman told The New York Times in 1982, “have shown us that the two require entirely different kinds of writing.” And movies were always the couple’s first love.

“We found we must be more abstract when writing for film,” she said, “because film really speaks more to the preconscious part of the brain, the part of us that dreams.”