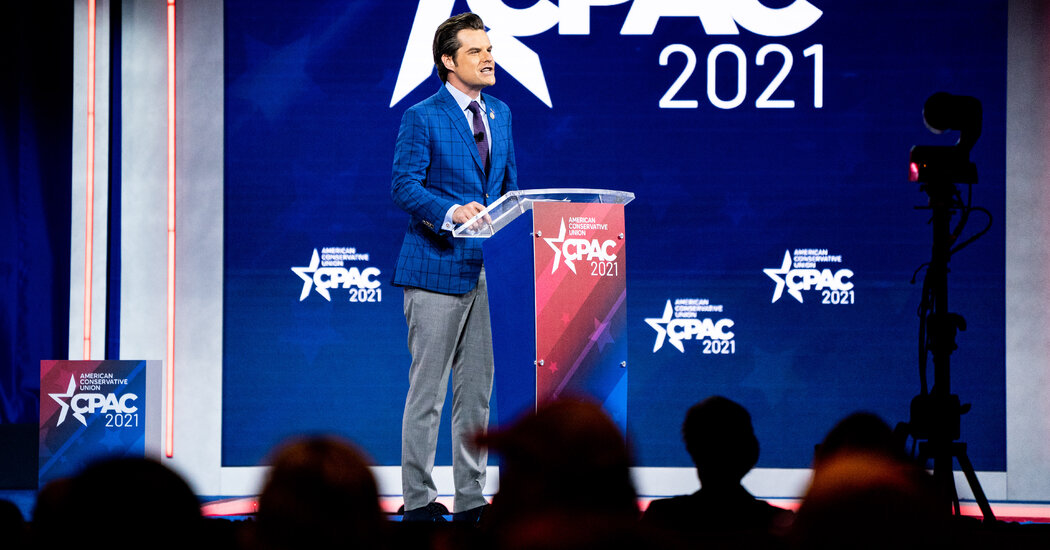 Joel Greenberg, a former elected official in Florida, has been talking to federal investigators since last year about the conduct of Representative Matt Gaetz and others.

A former local official in Florida indicted in the Justice Department investigation that is also focused on Representative Matt Gaetz has been providing investigators with information since last year about an array of topics, including Mr. Gaetz’s activities, according to two people briefed on the matter.

Joel Greenberg, a onetime county tax collector, disclosed to investigators that he and Mr. Gaetz had encounters with women who were given cash or gifts in exchange for sex, the people said. The Justice Department is investigating the involvement of the men with multiple women who were recruited online for sex and received cash payments and whether the men had sex with a 17-year-old in violation of sex trafficking statutes, people familiar with the inquiry have said.

Mr. Greenberg, who is said to have met the women through websites that connect people who go on dates in exchange for gifts, fine dining, travel and allowances and introduced them to Mr. Gaetz, could provide investigators with firsthand accounts of their activities.

Mr. Greenberg began speaking with investigators once he realized that the government had overwhelming evidence against him and that his only path to leniency lay in cooperation, the people said. He has met several times with investigators to try to establish his trustworthiness, though the range of criminal charges against him — including fraud — could undermine his credibility as a witness.

Mr. Greenberg faces dozens of other counts including sex trafficking of a minor, stalking a political rival and corruption. He was first indicted in June. The Justice Department inquiry drew national attention in recent weeks when investigators’ focus on Mr. Gaetz, a high-profile supporter of President Donald J. Trump who knew Mr. Greenberg through Republican political circles in Florida, came to light.

Speculation about Mr. Greenberg’s cooperation began mounting last week, after his lawyer and a federal prosecutor both said in court that he was likely to plead guilty in the coming weeks. “I’m sure Matt Gaetz is not feeling very comfortable today,” Fritz Scheller, Mr. Greenberg’s lawyer, told reporters afterward.

The United States attorney’s office for the Middle District of Florida is leading the investigation, which is examining not only whether Mr. Greenberg, Mr. Gaetz and others broke sex trafficking laws but also whether Mr. Gaetz paid for women over the age of 18 to travel with him to places like the Bahamas.

A Justice Department spokesman and a lawyer for Mr. Greenberg declined to comment.

A spokesman for Mr. Gaetz said he had done nothing wrong. “Congressman Gaetz has never paid for sex,” said the spokesman, Harlan Hill, who suggested that Mr. Greenberg was “trying to ensnare innocent people in his troubles.”

Prosecutors often seek out cooperators in complex investigations where an insider’s account can help make their cases. Typically, the authorities meet with potential cooperators many times before formally agreeing to a plea deal to determine what information they have and whether they could serve as a witness against others.

Cooperators are expected to be fully forthcoming about their own and others’ criminality. If prosecutors conclude that they have lied, cooperating witnesses are likely to receive no deal and could even increase their own culpability. Those who cooperate earlier in investigations typically receive the best deals from the government because their help is seen as more critical to developing leverage against other defendants.

Mr. Greenberg faces a mandatory minimum of at least 12 years in prison: 10 years on the sex trafficking count and two on a charge of identity theft.

He is the only person who has been publicly charged in the investigation. F.B.I. agents are said to have questioned several women who had encounters with the men.

Prosecutors have portrayed Mr. Greenberg in court papers as undertaking a variety of criminal schemes, including some after he was initially charged in June. A judge sent him to jail in March for violating the terms of his bail. Those issues could undermine his credibility as a witness.

At the same time, Mr. Greenberg potentially has a deep level of knowledge that could significantly help the government.

The investigation of Mr. Gaetz could be particularly challenging for the government because he has signaled that he is determined to fight any charges, some jurors could be sympathetic to him because of his relationship with Mr. Trump, and he has hired two high-profile lawyers to defend him.

Defense lawyers, academics and some prosecutors have criticized plea agreements where defendants — particularly those like Mr. Greenberg, who faces a lengthy mandatory minimum sentence — try to prove their worth to the government in the hopes that prosecutors will ask a judge to give them a reduced sentence.

Mr. Greenberg’s own lawyer highlighted these problems in a 2010 article in the Ohio State Journal of Criminal Law.

“For the criminal defendant confronting the minimum mandatory sentence, cooperation (snitching against others) is his only means of avoiding the harsh penalty,” Mr. Scheller wrote.

Defense lawyers, he continued, have a duty to speak up or quit representing clients who falsely implicate others to try to help themselves.

“The system that so handsomely rewards the snitch,” Mr. Scheller wrote, “encourages the advocate to become one himself.”