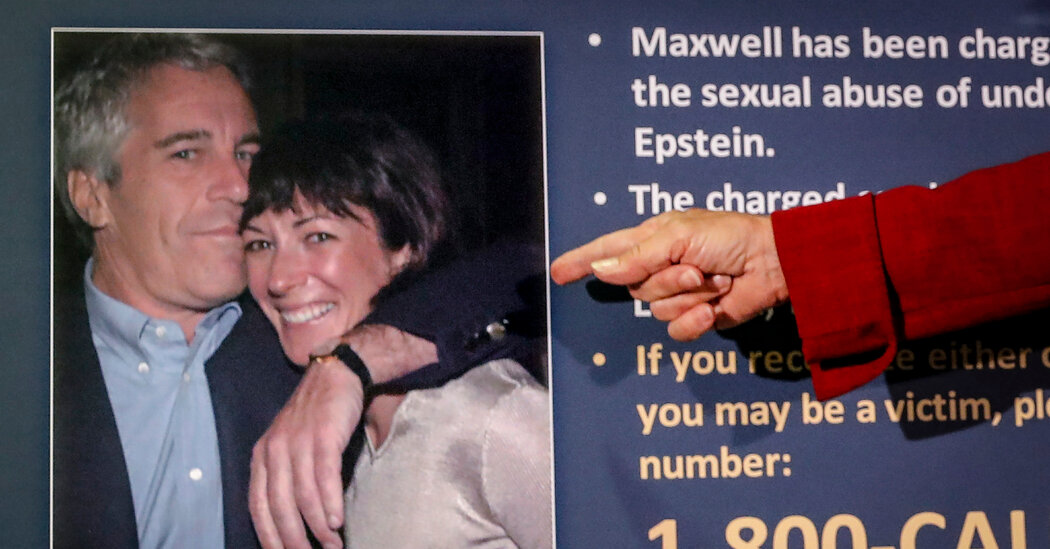 Ms. Maxwell’s sex-trafficking trial was expected to be a potential courthouse blockbuster. Those hoping for that were almost surely disappointed.

The sex-trafficking trial of Ghislaine Maxwell was widely expected to offer a rare window into the life of her longtime companion, Jeffrey Epstein: Fresh revelations about sordid acts. Telling insights into opaque financial matters. Sensational cameos by rich and famous men.

The window, it turned out, was narrow, and those thirsting for a courtroom blockbuster were almost surely left unsatisfied, as federal prosecutors kept a sharp focus on the accounts of four accusers and the evidence supporting their allegations.

High-profile friends of Mr. Epstein’s like former Presidents Donald J. Trump and Bill Clinton came up only in passing. Just a few financial transactions and a fraction of the thousands of F.B.I. photographs taken of Mr. Epstein’s lavish properties were offered into evidence. Even talk of Mr. Epstein’s private planes, the subject of much fascination, came off as staid.

The trial ended on Wednesday with Ms. Maxwell convicted on five of the six counts she faced over her role in procuring teenage girls for Mr. Epstein, who was accused of sexually abusing them. The stakes were high, and the consequences are real: At 60, she could spend the rest of her life in prison.

To obtain the verdict, prosecutors from the U.S. attorney’s office for the Southern District of New York pursued what is known within their office as a “thin to win” strategy.

The approach, which takes its name from a golf maxim, calls for bare-bones trial proceedings stripped of flourishes that may tantalize the public but can distract a jury. Such a strategy often runs counter to public expectations in highly publicized cases like Ms. Maxwell’s, but it keeps juries focused on the facts, former Southern District prosecutors said.

“The goal is not to put on a show and answer the press or public’s lingering questions about this or that,” said Martin S. Bell, a former prosecutor in the office’s public-corruption unit who did not have a role in the investigations involving Ms. Maxwell or Mr. Epstein.

After days of deliberation, a jury found Ms. Maxwell guilty of all but one charge in the sex trafficking case against her.

To Russell Capone, who oversaw the investigations into both Ms. Maxwell and Mr. Epstein before leaving the Southern District this past summer, the verdict vindicated the less-is-more approach.

Prosecutors were right, he said, not to try “to expose every nook and cranny of the sordid Epstein drama, which is not what this was about.” The decision to “just focus on these victims and put in a concededly thin case,” he said, “was the right one,” coupled with what he called an appeal to jurors’ “common sense.”

A lawyer for Ms. Maxwell declined to comment on Thursday, as did a Southern District spokesman.

In one example of the strategy, the four accusers on whose allegations the charges were based were the only victims to testify for the government. By contrast, at the disgraced film mogul Harvey Weinstein’s trial on state sex-crime charges, prosecutors called multiple women to testify, including several who were not explicitly connected to the charges, to show a pattern of conduct by Mr. Weinstein. (A Manhattan jury convicted him on two of five counts.)

Ms. Maxwell’s trial centered primarily on events from 1994 to 2004, a period during which, prosecutors argued, she and Mr. Epstein directly recruited girls for him to abuse. This gave way in later years, one prosecutor, Lara Pomerantz, told the jury, to a “pyramid scheme” in which victims recruited other young girls. Discussion of this era was limited at trial to one accuser’s testimony.

Another reflection of the narrow focus: the government’s decision not to call a number of potential witnesses whose testimony might have been riveting or even explosive but could have complicated the prosecution.

Those potential witnesses included Virginia Giuffre, who is among Mr. Epstein’s most vocal accusers. But one of the women who testified against Ms. Maxwell said that Ms. Giuffre, previously known as Virginia Roberts, had recruited her to give Mr. Epstein massages when she was 14.

Also missing from the prosecution’s case at trial was any mention of two co-conspirators who had been identified in pretrial filings as participating in the sex-trafficking scheme.

Nor did the government call women who worked for Mr. Epstein and Ms. Maxwell, including Sarah Kellen, whom defense lawyers mentioned repeatedly at trial. The same accuser who testified to being recruited by Ms. Roberts said Ms. Kellen had paid her to pose for nude photographs and helped schedule sexualized massages she took part in.

Boldface names like Mr. Trump, Mr. Clinton, Prince Andrew and the actor Kevin Spacey, all of whom have been associated with Mr. Epstein, went unmentioned except for their having ridden on Mr. Epstein’s planes. (Ms. Giuffre has accused Prince Andrew in a lawsuit of raping her when she was 17. He has denied the accusation.)

The trial did not address the many conspiracy theories that have sprung up around Mr. Epstein, including the mysterious origins of his indeterminate wealth, or rumors of his ties to foreign intelligence services. Although his name came up often during the three weeks of testimony, there was no direct mention of his 2019 death in custody, which New York City’s medical examiner ruled a suicide.

There was also scant mention of Ms. Maxwell’s background, except a reference to the 1991 death of her father, the British media baron Robert Maxwell.

Moira Penza, a former federal prosecutor in Brooklyn who led the team that won the 2019 racketeering conviction of the Nxivm sex cult leader Keith Raniere, said the government’s streamlined approach at Ms. Maxwell’s trial allowed “the jury to see that this is not a documentary.”

“It allows there to be this narrow focus, narrow lens that is very difficult for the defense to attack,” she said.

Prosecutors pared their case down as trial approached: Shortly before jury selection, they told the judge their case would take up to a month. They finished with their 24 witnesses in 10 days.

Prosecutors also sought to preclude a potential argument that Ms. Maxwell was one of Mr. Epstein’s victims, saying there was no evidence to suggest it. The issue did not arise at trial.

The narrow prosecution focus was not without vulnerabilities, some of which were apparent during the trial. The strategy left the government open to defense claims that it had not lived up to its promises, could not support the witnesses’ stories and had not proven its case.

In her closing argument, Laura Menninger, a lawyer for Ms. Maxwell, said the government had “really struggled to explain why an Oxford-educated, proper English woman would suddenly agree to facilitate sex abuse of minors.”

“Why didn’t Virginia Roberts come and get on the stand and tell you that she was a victim?” she asked while addressing the jury. “Use your common sense.”

Ms. Maxwell’s lawyers also noted that there was no testimony from women and men who had worked closely with Ms. Maxwell and Mr. Epstein, some of whom, like Ms. Kellen, were invoked repeatedly at trial.

But the judge overseeing the case, Alison J. Nathan, told the jury in her instructions that while there were people named at trial who did not testify, “each party had an equal opportunity or lack of opportunity to call any of these witnesses.”

“Their absence,” she added, “should not affect your judgment in any way.”