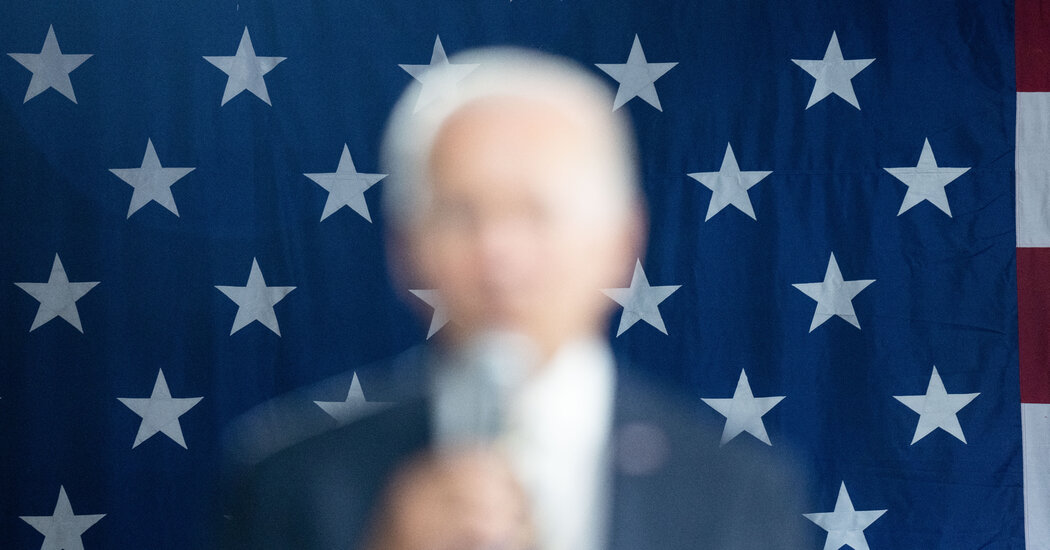 Bret Stephens: You came around!

Gail: Joe came around! Or caved, which sounds a little more satisfying. Of course, we’ve still got his Senate colleague Kyrsten Sinema and her tax obsessions to worry about. But if it all comes together this week, we’ll get the big Biden program to battle climate change. Will that make you as happy as it would make me, hmm?

Bret: Your happiness sounds like it’s an 8 or a 9 on a 10-point scale, and mine is probably around a 5. The Senate just passed a $280 billion bill to support the semiconductor industry under the guise of standing up to China, which is really just a huge giveaway to Intel and other U.S. chip makers. Now we’re dropping another $369 billion, and a lot of that will be in the form of corporate subsidies for companies like Tesla and General Motors. I know Manchin and Larry Summers are saying this will help bring down inflation. But pumping a lot of money into an economy usually has the opposite effect.

On the other hand, it’s a whole lot less than the trillions the administration wanted to spend last year, so I’ll take that as a victory. It might keep the nuclear industry alive, which is also vital if we are serious about tackling climate change, and it might also reduce some of the permitting bottlenecks that get in the way of energy infrastructure. And the two bills are solid legislative wins for President Biden, who really, really needed them.

Gail: As did all of us who are still Friends of Biden — although I guess we’d prefer not to be called F.O.B.s.

Bret: Shame the news arrives the same week we get the second straight quarter of negative economic growth, which is … not a recession?

Gail: I prefer to think of it as an, um, a very relaxed financial time.

Bret: Not sure how much it would help Biden if he were to say, “Folks, the economy isn’t stalling. It’s relaxing.” Sorry, go on.

Gail: And while of course politics is utterly beside the point — who in the world would worry about the entire makeup of Congress? — this legislation has got to help the Democrats come election time. Lots of good reasons we’re in an economic … slump. But you’ve got to be able to deliver a plan for making things better.

One of my favorite parts of the bill is the way it clamps down on pharmaceutical companies. Like giving the government power to negotiate on the prices of some drugs covered by Medicare.

Bret: Terrible! Price controls inevitably lead to less innovation, fewer incentives to manufacture generics and biosimilars and crazy distortions as pharmaceutical companies jack up the price of some drugs to make up for lost revenue in others. It’s just as bad an idea as rent control and rent stabilization, which is great for some but distorts the overall market and makes the city more expensive.

Gail: Hey, we the taxpayers are funding those drugs and we should get assurance that all our money isn’t going to Big Pharma’s profits.

Bret: I still don’t see the legislation swinging a lot of votes to the Democrats in the midterms. Biden also got his big infrastructure bill passed last year and it didn’t help him one bit politically. The only thing that can save the Democrats now is Donald Trump and his dumb political endorsements.

Gail: Anybody you’re thinking of in particular? For instance, that dweeb Blake Masters in Arizona who we talked about recently? The one who now graciously admits he “went too far” when he wrote a youthful essay implicitly criticizing American involvement in World War II. I believe you said if you were voting in Arizona and Masters won the primary, you’d support the — hehehehe — incumbent Democrat, Mark Kelly.

Bret: Yes, reluctantly. As David Sedaris might put it, the choice between Democrats and most Republicans these days is like a choice between a day-old baloney sandwich with a sad little pickle on a stale roll versus a plate of rancid chicken served with a sprinkling of anthrax on a bed of broken glass.

Gail: Got some other big primaries coming up on Tuesday besides Arizona. I’m sure a lot of Missouri Republicans would be happy to see the end of Eric Greitens, a former governor, who now seems to be fading in his run for the Senate. Can’t imagine why, given that he was forced to resign from office in an ethics crisis that included a mind-boggling sex scandal.

Bret: The fact that he was the front-runner, at least until recently, really tells you that the G.O.P. has reached its psychotic stage. To recap, Greitens, a former Rhodes scholar and Navy SEAL, resigned in disgrace as governor four years ago after barely a year in office. Later, his ex-wife alleged in a sworn affidavit, which Greitens disputes, that he knocked her down and confiscated her cellphone, wallet and keys to keep her and their children prisoner in their home. Also, that he was physically violent toward their 3-year-old son.

Gail: Which really should have sealed the deal.

Bret: More recently, he filmed an ad that was a live-action fantasy of shooting RINOs — “Republicans in name only” — that struck many of us as a pretty open invitation to violence. Even Josh Hawley thinks he’s vile, which is like Nikita Khrushchev taking a strong moral exception to Mao Zedong.

Gail: Seems like his fading in the polls shouldn’t require a celebration, but we’ll take what we can get.

Bret: As for Masters, his candidacy seems to rest on his promotion of so-called replacement theory.

Gail: Yes, the idea that Democrats are encouraging immigration so they can create a minority-majority of voters.

Bret: It’s almost amusing, since the most significant replacement to happen in Arizona was the one in which white settlers stole sovereign Mexican territory in an unprovoked invasion and dispossessed Native American tribes.

Bret: It’s also a master class in political malpractice, since it only alienates Hispanic voters, who are often fairly conservative and increasingly open to voting for Republicans. Are you feeling optimistic?

Gail: Have to admit I’m kinda worried that a lot of liberal voters — particularly the younger ones — are just so appalled by the way things have been going with abortion and guns and so depressed by the state of the economy that they’ll just sit this one out.

Bret: Yeah, but don’t discount the rancid chicken factor. As in, for instance, the Senate race in Georgia, or the governors’ races in Maryland and Pennsylvania.

Gail: Well, just to stick with Georgia for a second, it does seem a guy like Herschel Walker, with a really dreadful performance record as a father, should have tried not to build his campaign around being a family-values candidate.

Bret: With luck, maybe after a few losses Republican voters will finally get the message that a Trump endorsement in the primary is the political kiss of death in the general election.

Then again, it would also help Democrats if someone cured Biden of his habit of saying things that quickly prove totally wrong. The other day he said there wasn’t going to be a recession. Before that, inflation was “temporary.” Last summer, it was that the Taliban wasn’t going to overrun Kabul. You can almost know what’s coming by expecting the opposite of whatever he predicts. That’s why I’m confident he won’t run for a second term. He keeps insisting that he will.

Gail: I still don’t see any point in Biden’s announcing he won’t run this early in the calendar. He should wait until the end of the midterm elections. Then we can all turn our attention to the hordes of would-be successors waving their hands.

That’ll still give Democrats a year to check out the options. Don’t you think that’s enough?

Bret: If you’re the billionaire governor of Illinois, Jay Pritzker, it doesn’t make that much of a difference, since fund-raising isn’t an issue. Pete Buttigieg can’t be feeling as lucky. But either way, I think it would be better for Biden to announce before the midterms. Maybe he will even find it liberating to be a president who can really govern for the rest of his term without the burden of a presumptive campaign and all the nagging questions about it. And it will send the message that he has the grace and wisdom to know it’s time to step aside, which is more than can be said for the Chuck Grassleys and Dianne Feinsteins of politics.

Gail: Biden’s political clout, wobbly as it is right now, will vanish completely if he embraces lame-duck-hood. Announcing he’s not running by the end of the year seems a good timetable. But of course, actually trying to stay in for another race would be a disaster.

Bret: Gail, before we go, we should probably mention that we’ll be taking the next two weeks off for travel and family. Any parting suggestions or recommendations for our readers till we reconvene?

Gail: Stay cool, read something good — I’ve really been enjoying “A Gentleman in Moscow,” by Amor Towles, a novel about a count who’s trapped in his hotel after the Russian Revolution. That’s one for now, but when we get back, Bret, we’ve got to have that favorite-books conversation we’re always threatening to have.

And what’s your tip?

Bret: Same. Devote a few weekend mornings to some of the terrific longer pieces in The Times. Start with Alex Vadukul’s devastating, breathtaking portrait of Daniel Auster, Paul Auster’s son. It’s a modern-day “American Tragedy,” worthy of Dreiser. Then get out in the sun and count your life’s blessings. I hope there are many.