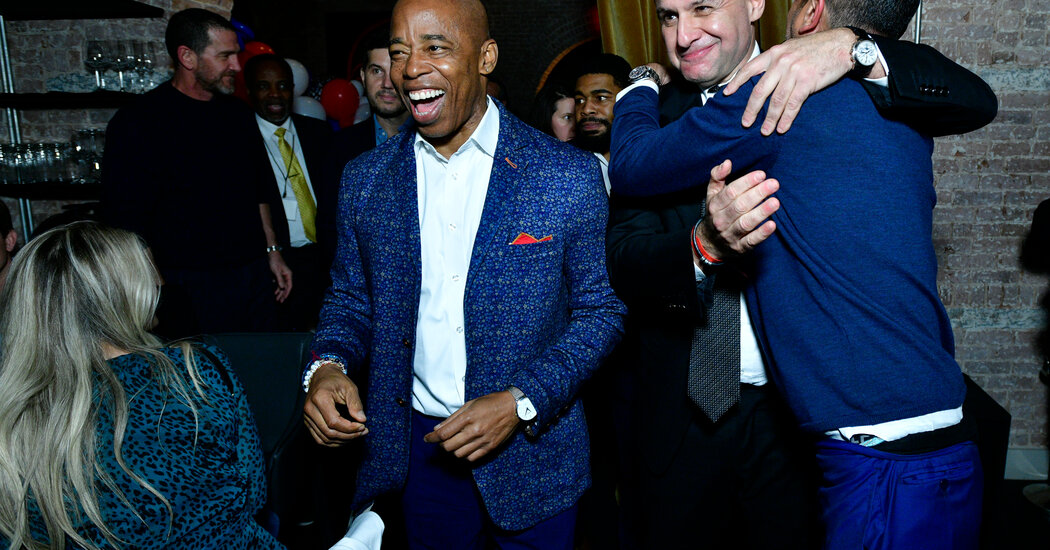 One of them was sponsored by a contentious public relations executive, Ronn Torossian.

Mayor-elect Eric Adams of New York has canceled a series of fund-raisers scheduled for this month, beginning with a planned event on Monday night co-hosted by a colorful and divisive public relations executive whose proximity had drawn unwelcome attention.

Mr. Adams, who will take office on Jan. 1, is scrambling to fill jobs in his administration and to manage his new status as the darling of certain powerful Manhattan circles that had more limited access to the outgoing mayor, Bill de Blasio.

“We canceled 10 planned fund-raisers for December because the transition’s fund-raising effort in November was extremely successful, bringing in enough donations to pay for both the inauguration and staff to help prepare the mayor-elect’s administration to hit the ground running on Day 1,” Mr. Adams’s spokesman, Evan Thies, said in an email.

The fund-raiser Monday night was to be co-hosted by Ronn Torossian, the chief executive of a public relations firm, 5WPR, whose high-profile presence at Mr. Adams’s side in recent months has rankled Mr. Adams’s staff, two people familiar with their relationship said. It was to be held at Zero Bond, the private club in NoHo where Mr. Adams has been known to fraternize into the night, particularly since winning the Democratic nomination in July.

An array of New York interests had been seeking to curry good will with the incoming mayor by contributing to Mr. Adams’s committees. Among the canceled fund-raisers is one hosted by the New York Electrical Contractors Association and another by the Muslim community activist Debbie Almontaser, Mr. Thies said.

But Mr. Adams has not canceled all of his events. He still plans to attend a Dec. 16 event hosted by former Mayor Michael Bloomberg, Mr. Thies said, but it is no longer a fund-raiser. Mr. Bloomberg endorsed Mr. Adams in the general election and the mayor-elect has leaned on the former mayor for advice.

A spokesman for Zero Bond says the club doesn’t comment on events hosted by its members.

The canceled Zero Bond event casts a spotlight on Mr. Adams’s abrupt arrival as a Manhattan power broker after a career in Brooklyn across the river from Manhattan’s elite. Mr. Torossian is a new friend who has helped introduce Mr. Adams to figures in the real estate and entertainment businesses, and crucially brought him to the exclusive Zero Bond, which Mr. Adams used as an informal transition headquarters.

While many politicians carefully manage their relationships to avoid potential favor-seekers, conflicts of interest or simple embarrassment, Mr. Adams has thrown himself headfirst into the new circles his election has opened, even flying to Puerto Rico on a jet owned by the cryptocurrency investor Brock Pierce.

But Mr. Torossian’s particularly controversial history, and his high profile at Mr. Adams’s side, has drawn a wave of coverage, including an unflattering Daily Beast story that revisited some of Mr. Torossian’s controversial clients, several of them allies of former President Donald Trump, as well as his “street-brawler” style and profane emails.

“It’s great Eric has hit his fund-raising goals and is oversubscribed,” Mr. Torossian said in a text message on Saturday. “His pro-business, pro-police policies are what NYC needs.”

None of the Adams aides who had sought to distance their boss from Mr. Torossian would speak for the record, perhaps because of his reputation as a tenacious enemy.

The site also attacks other PR firms with whom Mr. Torossian has clashed. After Ken Frydman, a New York public relations executive, won a contract that 5WPR had also sought, Mr. Frydman’s firm received a negative write-up on Everything PR, saying, “We cannot in good faith recommend this agency.”

“I should sue Ronn for slander and defamation,” Mr. Frydman said. “But I don’t have time to stand on that long line.”