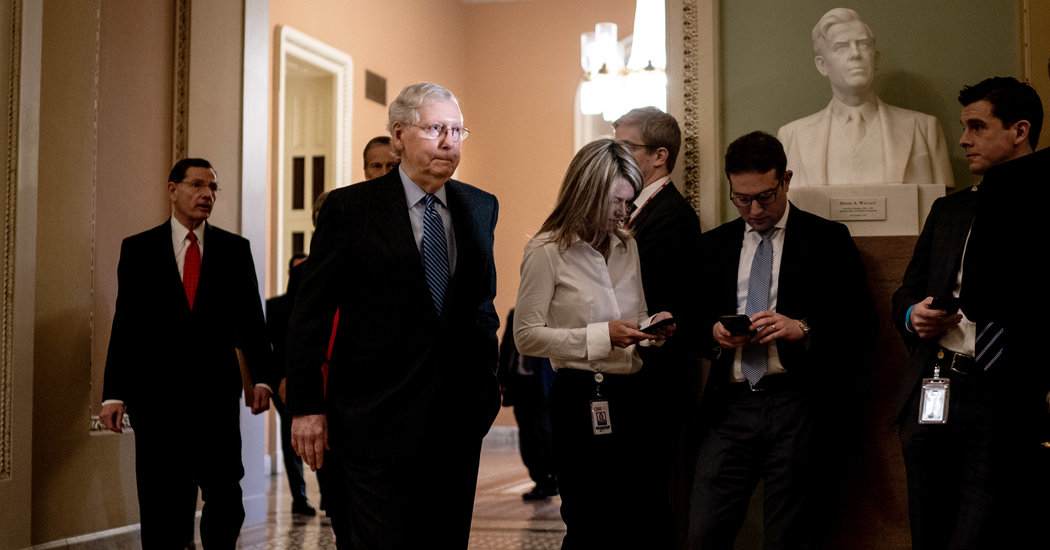 WASHINGTON — Senator Mitch McConnell, the majority leader, said Tuesday that he planned to move forward with President Trump’s impeachment trial without committing to calling witnesses or hearing new evidence, foreshadowing a partisan vote to kick off a divisive proceeding.

His decision deepened a standoff over the shape of a Senate trial that has gripped the Capitol in the weeks since the House voted to impeach Mr. Trump. But hours later, Speaker Nancy Pelosi indicated it may not persist much longer, saying that she would “soon” transmit the two articles of impeachment, though not before Mr. McConnell made public the rules for the process.

Mr. McConnell shared his intentions with senators over lunch in the Capitol, declaring that he had the votes he needed — including among moderate Republicans — to steamroll over Democratic objections and proceed with the trial that puts off final decisions on whether to consider evidence.

That would mean the Senate would tackle those questions only after representatives of the House and the president make opening arguments and senators question both sides.

“We have the votes,” Mr. McConnell, Republican of Kentucky, told reporters afterward. He said he modeled his plan on the procedures used during the impeachment trial of President Bill Clinton in 1999, the Senate’s only modern precedent.

But this time, both the facts of the case and the politics are far different. Mr. Trump directed a campaign to stonewall the House impeachment inquiry, barring testimony from some of his closest advisers and refusing to provide any documents.

Mr. McConnell has promised a speedy acquittal, and Democrats charge that his refusal to hear from witnesses who could bolster the case against the president is tantamount to a cover-up. They are expected to oppose Mr. McConnell’s resolution almost unanimously.

After weeks of quiet haggling, the majority leader’s announcement signaled that the traditionally cordial Senate was poised to begin a proceeding of high historical consequence just as polarized as the more volatile House, which split along party lines in charging Mr. Trump.

Ms. Pelosi, returning to the Capitol for the first time in the new year, said she still wanted more detail from Mr. McConnell about what precise procedures he would follow before naming the lawmakers who will prosecute the case.

“It is important that he immediately publish this resolution, so that, as I have said before, we can see the arena in which we will be participating, appoint managers and transmit the articles to the Senate,” she said in a letter to colleagues released a short time later.

She accused Mr. McConnell of being loyal to Mr. Trump rather than the Constitution and pursuing a trial “designed to deprive senators and the American people of crucial documents and testimony.”

A decision to transmit the articles could come as soon as this week, though a series of Iranian attacks on American forces early Wednesday in Iraq left the exact timing in doubt.

For his part, Senator Chuck Schumer of New York, the Democratic leader, promised to force a series of votes on calling John R. Bolton, the former White House national security adviser, and three other witnesses and document requests at the outset of the trial. Republicans could defeat the motions, but Democrats hope that some of them would instead break ranks, unwilling to go on the record against additional fact-finding in a trial of constitutional consequence.

“If you are afraid of the facts, if you are afraid of what would come out, if you want to cover it up, even in something as weighty and serious as impeachment, then you say no witnesses and documents,” Mr. Schumer said at a news conference.

He predicted a handful of Republicans could end up supporting summonses for witnesses like Mr. Bolton or Mick Mulvaney, the acting White House chief of staff, whom Mr. Trump effectively blocked from testifying in the House.

But for now, even moderate Republicans and those up for re-election this year were sticking with Mr. McConnell. Senators Susan Collins of Maine and Lisa Murkowski of Alaska have both expressed interest in potentially calling witnesses during the trial, but they have come around to Mr. McConnell’s argument that the matter should be debated only after opening arguments.

“I had certainly hoped that over the holidays, Leader McConnell and Senator Schumer would have been able to come to terms of an agreement,” Ms. Murkowski said on Tuesday. Instead, she conceded, they had become hopelessly “snarled up” in the debate over witnesses.

The renewed posturing came a day after Mr. Bolton said he would now be willing to testify if subpoenaed by the Senate. Other impeachment witnesses and people close to him have said Mr. Bolton could provide an unflattering account of Mr. Trump’s decisions to withhold a White House meeting and almost $400 million in military aid from Ukraine as he sought investigations there that would benefit him politically.

At the White House, the president played down Mr. Bolton’s significance as a witness, and said that impeachment was perhaps “the greatest hoax ever perpetrated on our country.”

“He would know nothing about what we’re talking about,” Mr. Trump said of Mr. Bolton, who left the White House in September amid policy disputes with the president.

The goal, according to an abuse of power charge, was to bolster Mr. Trump’s re-election campaign. The president was also charged with obstruction of Congress for his blanket stonewalling of the impeachment inquiry, which the House called an effort by Mr. Trump to conceal his conduct from the legislative branch.

It is that stonewalling that has animated Senate Democrats’ drive to secure a pledge to include additional witnesses and documents at trial.

Unlike in 1999, when testimony from every major witness had already been made public by the time the case came to trial, Mr. Trump has succeeded in withholding from Congress nearly every piece of documentary evidence related to the case and a dozen witnesses with knowledge of his actions.

Senate rules require only a simple majority — 51 senators — to call witnesses, and with a handful of Republicans professing at least some interest in doing so, additional testimony is still possible. Three witnesses were eventually called in Mr. Clinton’s trial, all of whom had been interviewed in the inquiry that led to the charges.

But Mr. McConnell’s plan offers no such guarantee, and he is betting that once a trial is underway, the desire to bring it swiftly to a close may persuade members of his own party not to join Democrats.

“There will be, I’m sure, intense discussion once you get past phase one about the whole witness issue,” Mr. McConnell said, playing down Democrats’ concerns.

With the president’s eventual acquittal by the Senate all but certain, both parties have tried to leverage the pause between impeachment and the trial for their own advantage.

Democrats argue that it has forced individual Republicans senators to go on the record about their intentions and highlighted what they see as Mr. McConnell’s intention to help Mr. Trump hide his wrongdoing. The intervening time, they say, has also allowed for new documents and evidence to become public through news reports and public records requests that the administration refused to hand over.

“Pelosi is very good at this. She will know when the lemon has been fully squeezed,” said Representative Peter Welch, Democrat of Vermont. “But at the end of the day, the House impeaches and the Senate tries.”

Some Senate Democrats appear to be losing patience.

“Our best leverage right now over Republicans is votes inside the Senate trial,” said Senator Christopher S. Murphy, Democrat of Connecticut. “We should probably get to the point where we can put Republicans on record as soon as possible.”

Republicans have assailed Democrats for what they contend is political gamesmanship and hypocrisy, after having asserted for weeks that impeaching Mr. Trump was an urgent matter.

Republican leaders conducted a whip count to confirm support for the plan in their party. Though they did not publicize the results, it appeared all 53 senators in the Republican conference would vote with Mr. McConnell at the outset of the trial.

At least one, however, suggested that he might ultimately side with Democrats during the proceeding and vote to call witnesses.

“Going with the Clinton impeachment process is satisfactory to me because that process did provide, down the road, for an opportunity to hear from witnesses,” Senator Mitt Romney said. “And I would like to hear from John Bolton.”