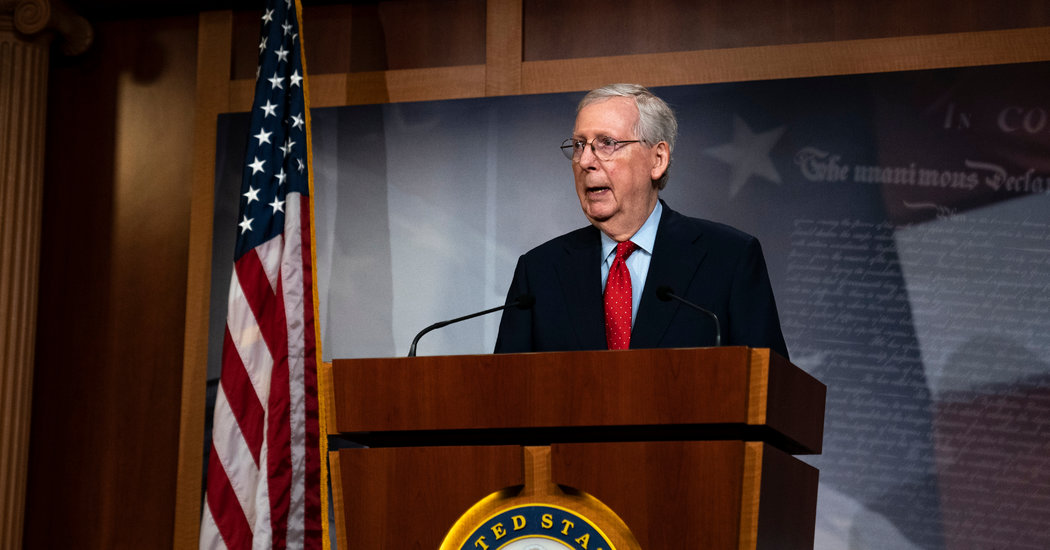 “I think this whole business of additional assistance for state and local governments needs to be thoroughly evaluated,” Mr. McConnell, Republican of Kentucky and the majority leader, said in an interview with the conservative radio host Hugh Hewitt. “There’s not going to be any desire on the Republican side to bail out state pensions by borrowing money from future generations.”

Mr. McConnell’s comments were an explicit rejection of a top priority of Democrats who have pushed to spend tens of billions of dollars to help states. His staff members highlighted their partisan cast in a news release circulated a short time later, in which his statement appeared under the heading “Stopping Blue State Bailouts.” The phrase suggested that the top Senate Republican was singling out for scorn some of the hardest-hit, heavily Democratic states such as California, Illinois and New York.

The remarks drew a caustic reaction from Gov. Andrew M. Cuomo of New York, who called the bankruptcy suggestion “one of the saddest, really dumb comments of all time.”

“OK, let’s have all the states declare bankruptcy — that’s the way to bring the national economy back,” he said.

Mr. Cuomo accused Mr. McConnell of hyperpartisanship, criticizing him for distinguishing among states based on their political leanings, rather than “states where people are dying. Why don’t we think about that? Not red and blue. Red, white and blue. They’re just Americans dying.”

Representative Peter T. King of New York, a fellow Republican, called Mr. McConnell’s remarks “shameful and indefensible.” “To say that it is ‘free money’ to provide funds for cops, firefighters and healthcare workers makes McConnell the Marie Antoinette of the Senate,” Mr. King said on Twitter on Wednesday night.

States do not now have the ability to declare bankruptcy to reduce their financial obligations, but Mr. McConnell raised the possibility of letting them do so rather than pouring federal money into rescuing them, which would push the federal government deeper into debt.

“I would certainly be in favor of allowing states to use the bankruptcy route,” he said. “It saves some cities. And there’s no good reason for it not to be available.”

The Democratic push for more federal aid to states and cities contending with a budget crunch because of the pandemic was a major sticking point in the latest round of legislation to respond to the outbreak, slated to clear Congress on Thursday, with Senate Republicans refusing to budge on the issue in negotiations.

Mr. McConnell had already made it clear on Tuesday that he would approach the next round of emergency funding much more cautiously. He went further in his comments on Wednesday, saying that he did not want Washington rescuing the pension plans of states that were struggling to keep up with their commitments to an array of union workers.

“We’ll certainly insist that anything we’d borrow to send down to the states is not spent on solving problems that they created for themselves over the years with their pension programs,” he said.

Mr. McConnell is likely to run into considerable resistance to his position from the White House, congressional Democrats, governors of both parties and even some lawmakers in his own party.

After the Senate vote Tuesday, top Democrats said that President Trump was open to the idea of helping states with their pension issues and that Mr. McConnell had been the chief obstacle to getting money for local governments this time around.

In a pair of Twitter posts on Tuesday, Mr. Trump said that after he signed the latest round of emergency pandemic legislation, he was ready to open discussions on help for “State/Local Governments for lost revenues from COVID 19, much needed Infrastructure Investments for Bridges, Tunnels, Broadband, Tax Incentives for Restaurants, Entertainment, Sports, and Payroll Tax Cuts to increase Economic Growth.”

Democrats were also confident that Congress would move forward with more relief for states, with Democratic leaders of the House and Senate promising a robust program. Several Republican lawmakers have introduced or signed on to proposals to provide huge sums to struggling states.

In his rebuke to Mr. McConnell, Mr. Cuomo said the most recent round of coronavirus relief was woefully inadequate, complaining that the lack of money for states was ridiculous.

Mr. McConnell is a longtime rival of the labor movement and will be in no hurry to move forward with anything resembling pension relief for what he considers overly generous benefits that states mistakenly provided.

“We all have governors regardless of party who would love to have free money,” he said.