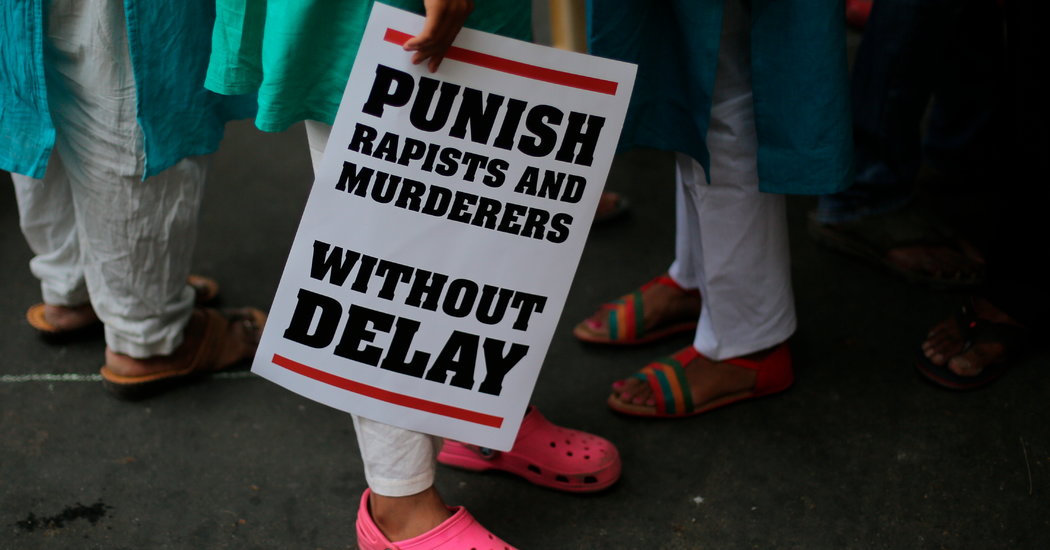 NEW DELHI — India brought a gruesome and infamous rape case to a close Friday morning, hanging four men who had been convicted of raping and murdering a young woman on a moving bus in 2012, jail officials said.

The men, who were sent to the gallows at a large jail in New Delhi in the early morning hours, had trapped the young woman on the bus and brutally assaulted her with an iron bar, leaving her mortally wounded.

The grisly nature of the crime and the fact that it unfolded on the busy streets of India’s capital sent shock waves across the nation and around the world, leaving a deep mark on India’s psyche.

The 23-year-old-victim, a physiotherapy intern who had dreamed of being a doctor and had asked her parents to use her wedding money for her education, came to be known as Nirbhaya, the Fearless One. Her death from the injuries she sustained in the attack sparked uncomfortable discussions about the abuses that countless Indian women suffer every year.

After the execution, the victim’s mother said that “even if delayed,” her daughter “got justice.”

“Our faith in justice is restored,” said the mother, whose name was withheld because Indian law requires that the victim’s name and her family’s identity be kept private.

Indian news channels reported that the men’s last legal challenges were rejected around 3:30 a.m. They had refused to eat and were up much of the night before being led to the gallows around 5:30 a.m. A small crowd had gathered outside the jail, counting down to the hanging.

The jail’s spokesman, Raj Kumar, confirmed that all four had been hanged and said, “We will issue a statement later.’’

Women’s activists have said they wonder how much difference the executions will make, and lamented how little has changed since Nirbhaya’s death. After her assault, huge protests erupted across the country, with hundreds of thousands of young people pouring into the streets demanding tougher rape laws, more effective policing and better treatment of women. Many Indian women are forced into arranged marriages, harassed on the streets and silenced by the men in their family.

“We keep talking about women and we do nothing to educate men,” said Deepa Narayan, a social scientist who recently published a book on how women are treated in India. “Even the police and the judicial system, they’re all part of the same patriarchal culture.”

The Indian government created a high-level committee, the Verma Commission, to recommend possible changes to the laws related to sexual violence against women. Though some laws covering rape have been stiffened, India still makes international headlines for horrendous gang rapes, and the cases keep coming. Only a few months ago, a young veterinarian was raped and murdered by a group of men in an incident reminiscent of the 2012 bus attack.

India has been reluctant to execute its citizens. Its last execution was of Yakub Memon, a convicted terrorist, in 2015. A huge percentage of the more than 2,000 death sentences imposed in the past two decades have been overturned or commuted by higher courts, a recent study found.

But in the Nirbhaya case, there was enormous pressure on the courts and the government of Prime Minister Narendra Modi to show no mercy. The four convicts had tried everything to avoid the hanging, filing petition after petition.

One of the convicts even tried, in vain, to use New Delhi’s pollution problem as an argument not to hang him. “Everyone is aware of what is happening in Delhi NCR in regard water and air,” said the petition filed by Mr. Kumar in December. “Life is short to short, then why death penalty?”

The family of Mr. Gupta, one of the youngest of the convicted men, had tried to argue for a lesser sentence because the family contended he was a juvenile at the time of the crime. One juvenile was convicted in the case and sentenced to three years in a reform facility; he has since been freed.

Mr. Gupta’s family produced a school certificate that said he was 16 in 2012 but the courts have consistently rejected the claims. Still, judges granted several delays of the execution to allow all appeals and mercy petitions to be exhausted.

In recent weeks, as it became clear the courts were losing patience, Mr. Gupta’s mother, Indira Devi, who works at the same small stand selling grapes, apples, cherries and oranges as her son had, said she had lost the strength to talk to her son anymore.

“It’s nearing the end and still no one listens to us,” she said.

On the night of the attack, Dec. 16, 2012, the physiotherapy intern and a male friend were leaving a mall in New Delhi after watching the film “Life of Pi.” A private bus, mostly empty, offered them a ride.

According to investigators, the passengers on the bus were the Singh brothers, Mr. Kumar, Mr. Gupta, Mr. Sharma and the juvenile. They had robbed at least one other person that night, the police said. When the intern and her companion boarded, the men locked the doors and savagely attacked the couple.

As the bus cruised Delhi’s streets, the men raped the woman, rammed the iron rod into her body, beat her and bit her all over. An hour or so later, they pushed the couple’s bloody, naked bodies out the door and left them for dead.

The victim’s male friend recovered, but the woman died 13 days later at a hospital in Singapore.

“It’s like she had been dragged from the clutches of animals,” her mother said in an earlier interview.

Her mother, who has become a women’s rights activist and now travels around India speaking against rape, said that at a recent court date, one of the convict’s mothers asked her for forgiveness.

“I can’t forgive,” the victim’s mother said. “All good memories of my daughter are gone. When I see her in my mind, I see her blood-streaked face. The face of December 16 is the only face that comes.”