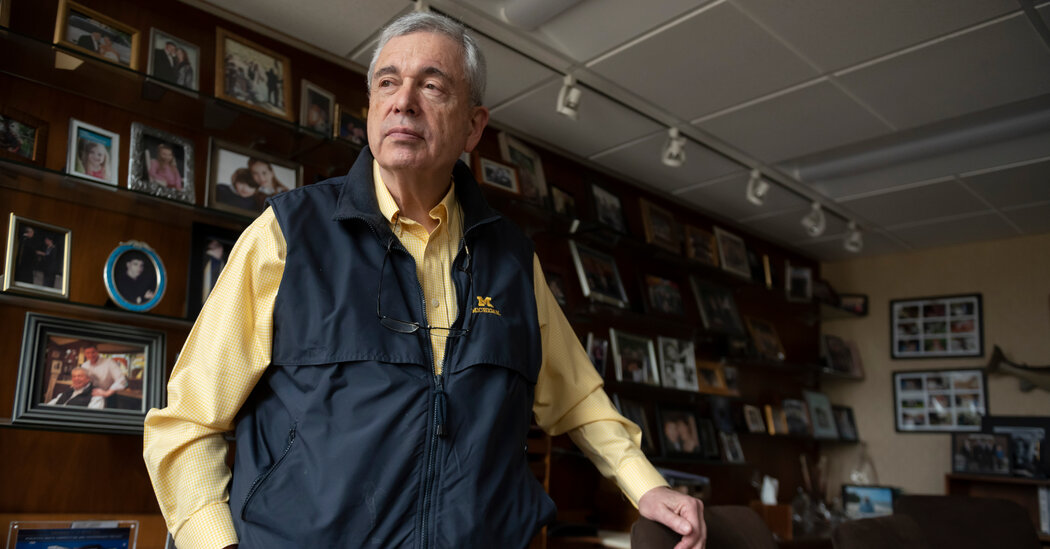 Ron Weiser, who leads the state’s Republican Party, was swiftly denounced after a video surfaced in which he also joked about assassination when discussing two G.O.P. congressmen.

Ron Weiser, the chair of Michigan’s Republican Party, drew swift criticism on Friday after a video surfaced that showed him calling top Democratic officials in his state “witches” and referred to assassination while discussing two Republican congressmen who had voted to impeach former President Donald J. Trump.

The video was taken at a local Republican meeting in Clarkston, Mich., on Thursday, during which Mr. Weiser talked about his party needing to vote out three top Democratic officials: Gov. Gretchen Whitmer; Dana Nessel, the state attorney general; and Jocelyn Benson, Michigan’s secretary of state. The Detroit News reported on and published the video on Friday.

In the video, Mr. Weiser can be heard calling the officials the “three witches.”

“Our job now is to soften up those three witches and make sure we have good candidates to run against them, that they are ready for the burning at the stake,” Mr. Weiser said about the women, all of whom are up for re-election in 2022.

Also, in discussing intraparty politics, Mr. Weiser joked about assassination in response to a crowd member’s question about supporting potential opponents running against Representatives Fred Upton and Peter Meijer — current G.O.P. congressmen from Michigan who voted in favor of impeaching Mr. Trump on a charge of inciting an insurrection.

“Other than assassination, I have no other way than voting them out,” he said.

Democratic officials responded to Mr. Weiser’s comments on Friday, denouncing them as an example of dangerous rhetoric similar to that that led to a group of men plotting to kidnap Ms. Whitmer ahead of the 2020 presidential election.

“Given the dramatic increase in death threats against Michigan elected officials during the Trump Administration, this type of rhetoric is destructive and downright dangerous,” Bobby Leddy, a spokesman for Ms. Whitmer, said in a statement.

Ms. Nessel and Ms. Benson both took to Twitter to give pointed responses to Mr. Weiser’s comments.

“Witches who magically decrease Covid spread, increase voter turnout and hold sexual predators accountable without any help from the legislature?” Ms. Nessel said in a post that was accompanied with an image of her, Ms. Whitmer and Ms. Benson in witch hats. “Sign me up for that coven.”

Ms. Benson posted a picture of Dorthy and the Good Witch from “The Wizard of Oz” with the caption “#newprofilepic.”

Phone messages left for Mr. Weiser on Friday afternoon were not immediately returned. But he later responded to the criticism on Twitter, saying that his remarks had been “taken out of context.”

“I want to thank my friends and supporters who sent me thoughtful feedback today,” Mr. Weiser said. “I made some comments that are clearly being taken out of context. While I should have chosen my words more carefully, anyone who knows me understands I would never advocate for violence.”

Mr. Weiser also said he had spoken personally with Representatives Upton and Meijer about his remarks.

On Friday, Ted Goodman, a spokesman for the Michigan G.O.P., said Mr. Weiser’s contentious statements from Thursday were being misconstrued.

“Chairman Weiser and our executive director, Jason Roe, both made very clear that it is up to the voters to determine the nominees of the Republican Party, and to suggest anything else is dishonest and irresponsible,” Mr. Goodman said via email, referring to the mention of assassination at Thursday’s event. “The chairman has also personally donated to all Republican congressmen in Michigan.”

Mr. Goodman did not respond to questions about Mr. Weiser’s comments about Democratic officials.

Mr. Meijer declined to comment on Friday night. Phone and email messages to Mr. Upton’s office were not immediately returned.

In January, Mr. Weiser, who is also a member of the University of Michigan Board of Regents, caught the ire of faculty members and students at the university who accused him of not denouncing Mr. Trump following the Jan. 6 attack on the Capitol, according to The Detroit News. A petition with over 5,000 signatures called on board members to recall Mr. Weiser from his position or for him to resign.

Mr. Weiser was elected to Michigan’s top Republican post in February alongside his co-chair, Meshawn Maddock, their victories hinging in part on their loyalty to Mr. Trump.