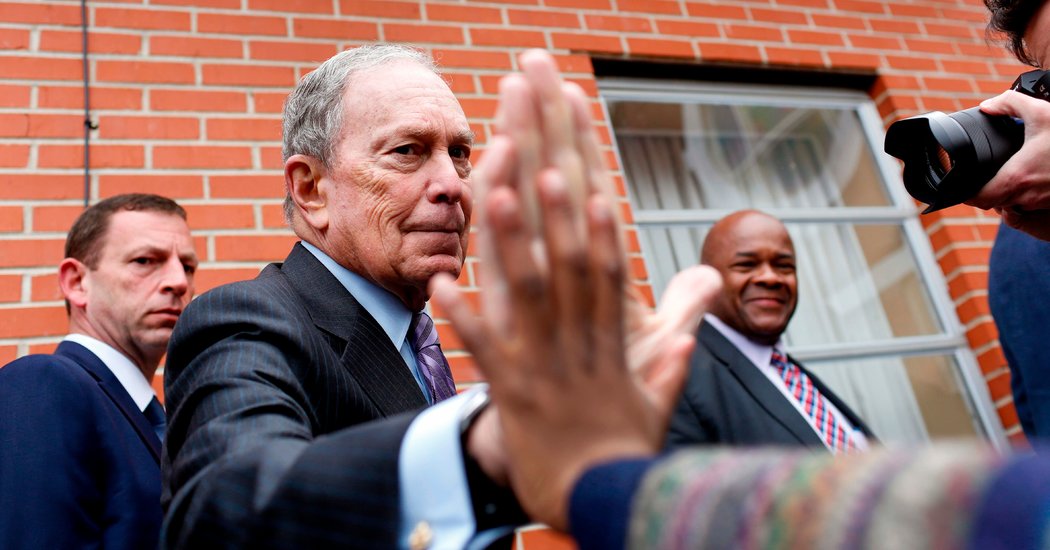 Inside the celebrated Brown Chapel A.M.E. Church in Selma, Ala., on Sunday, Michael Bloomberg looked, as the kids tend to say, shook.

Thousands had gathered to mark the anniversary of the 1965 civil rights march in Selma where police brutally beat protesters on the Edmund Pettus Bridge.

As Mr. Bloomberg spoke, a small group in the pews turned their backs to him, in silent protest of his failure to address the stop-and-frisk policing tactic he employed as mayor of New York that harassed hundreds of thousands of black and Latino young men.

Interest in Mr. Bloomberg is high in the South, where black Democrats say they are willing to do whatever it takes to deny Trump re-election and wonder whether Mr. Bloomberg can get the job done. Like many others, they also say they find his reputation as an entrepreneur with big ideas attractive.

“I’d like to hear what he has to say,” Gwen Joseph, a black Democrat who lives in the Houston area, told me outside a Bloomberg event. “I want someone who can beat Trump.”

Then Bloomberg the man emerged.

In a thick New York accent, he carried on about his love for Texas, which he said he had visited four times since Christmas. “The combination of rodeo and Lizzo is pretty tempting. I couldn’t wait that long for another box of Shipley’s,” he said, name-checking the local doughnut shop that catered the event.

Lizzo? Even for a lighthearted stump speech written by someone else, I thought, envisioning Mr. Bloomberg grooving to the soulful, wailing black pop sensation was a stretch.

From there, he launched into a brief stump speech about his record in New York, his support for reproductive rights and his success as a self-made entrepreneur. He was at his best when he talked about Mr. Trump, with whom he once was friendly but whom he now clearly loathes.

When he was finished, there was no lingering on a ropeline or extended posing for selfies as at an Elizabeth Warren rally. Mr. Bloomberg, never one for retail politics, simply left the stage, shaking a few hands before hustling onward to Oklahoma.

In multiple stops across a half dozen Super Tuesday states, the formula was nearly the same. He was met with small but appreciative crowds, gave his stump speech and hustled off to the next event. There was always a sumptuous spread for attendees and the media.

On a single day last week, the former mayor spoke at campaign events in Houston, Oklahoma City and Bentonville, Ark. It was a grinding schedule not only for Mr. Bloomberg, who is 78, but for the dazed staff members and reporters who struggled to keep up.

The former mayor saw his biggest, most enthusiastic crowds in Bentonville, the headquarters of Walmart, where a mostly white crowd of over 1,000 people came out to see him on a chilly night.

In recent days, though, the mood of the Bloomberg campaign, once jubilant, has dimmed after a one-two punch.

First, the former mayor’s disastrous performance in the Feb. 19 debate.

Second, and far more important, was Joe Biden’s decisive victory in South Carolina on Saturday, giving Mr. Biden momentum that could close off Mr. Bloomberg’s pathway to the nomination.

Yet interest in Mr. Bloomberg across the Super Tuesday states, where he will appear on primary ballots for the first time, is strong. At Bloomberg campaign events across the South, many described themselves as former Biden supporters nervous that Mr. Biden isn’t up to the job. In Memphis, my Uber driver, a black woman, said she liked Mr. Biden. “But really that’s only because of Obama, you know,” she said with a smile. She voted early for Mr. Bloomberg.

As Mr. Bloomberg campaigned in Selma and across the South, the crowds were largely friendly and upbeat. But at several events, black voters quietly approached me with questions about “the frisk,” as many here call it.

“So when he says it brought crime down, is that right?” Valerie Fitzgerald, 64, asked me at a Bloomberg event in Memphis.

Nearby, Loranzo Andrews, 48, stood nearby in an “I Am a Man” hat, in homage to the 1968 sanitation workers strike in Memphis that drew Dr. Martin Luther King Jr. to the city, where he was assassinated. “I need to hear more from him on this,” Mr. Andrews said, referring to stop-and-frisk. “I want a more personal apology.”

In an electorate that is deeply torn, unease over the policy may tip black Democrats toward Mr. Biden. So could Mr. Biden’s relationship with Mr. Obama, an advantage hard for any other candidate to overcome.

Michael Bloomberg’s unlikely political career began in the days after the Sept. 11 attacks, when New York voters looked for a steady hand and found it in a competent but often bloodless technocrat.

He governed with broad support from black voters and others for years. Stop-and-frisk eroded that support. It was clear it had discriminated against black and Hispanic New Yorkers. The data showed its wide-scale use was unnecessary. But Mr. Bloomberg defended it anyway, for years.

In what could be a final chapter of Mr. Bloomberg’s public political life, he found himself traveling the unfamiliar territory of the American South, and in dire need of African-American support.

In Selma on Sunday, Mr. Bloomberg’s unease with the task was apparent.

As the Democratic presidential candidates joined thousands walking over the Edmund Pettus Bridge on Sunday, excited marchers swarmed them, one by one.

In the throng, Senator Warren, wearing sunglasses and a bright blue jacket, was all smiles.

Tom Steyer, who had dropped out of the race by then, marched anyway. Several black women approached him and asked to take pictures with him in the middle of the bridge. He was thrilled.

Nearby, Mr. Bloomberg walked on in a respectful silence, like a teenager awkwardly out of place at a party.

If enough Democrats believe he is the best candidate to beat Donald Trump, they will vote for him, despite some stains on his record. Black Americans see Mr. Trump as a singular threat. They know exactly who he is.

When I asked black voters, especially older citizens who grew up under Jim Crow, if stop-and-frisk gave them pause, they shook their heads. They know Mr. Bloomberg has made mistakes. But they don’t believe he hates black people.

For some Americans in this election year, that’s enough.