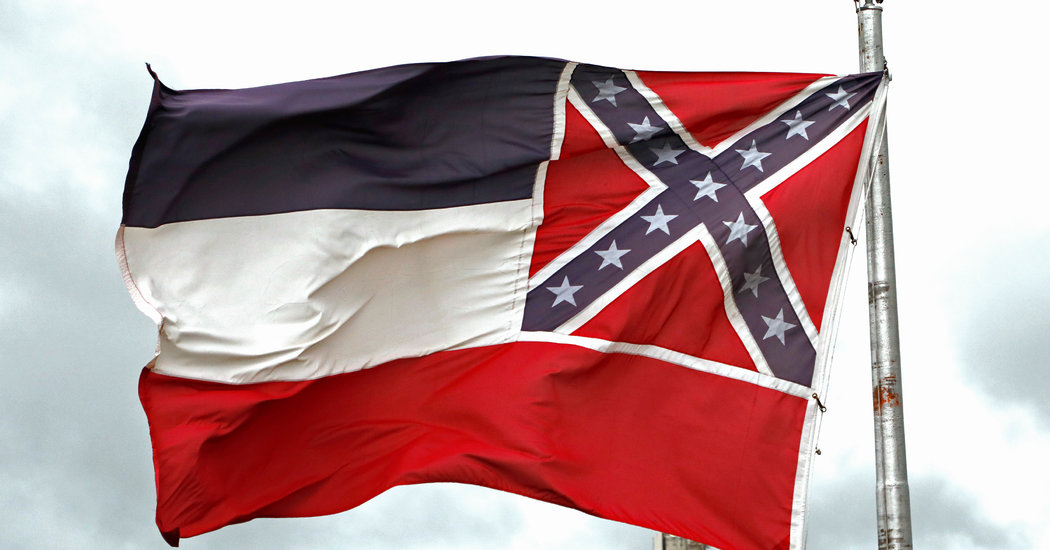 JACKSON, Miss. — Mississippi lawmakers voted on Sunday to bring down, once and for all, the state flag dominated by the Confederate battle emblem that has flown for 126 years, adding a punctuation point to years of efforts to take down relics of the Confederacy across the South.

The flag, the only state banner left in the country with the overt Confederate symbol, served for many as an inescapable sign of Mississippi’s racial scars and of the consequences of that history in defining perceptions of the state.

Still embraced by many white Mississippians as a proud display of Old South heritage, the flag increasingly has come to evoke segregation, racial violence and a war that had a central aim of preserving slavery.

In Mississippi, the state with the nation’s highest percentage of African-Americans, that has long been the understanding of black residents. It’s now the view of many white Mississippians as well. For others, the drag on the state’s perception by outsiders and the continuing friction within were battles too costly to keep waging.

The vote in the Mississippi House was 91 in favor of removal and 23 opposed. The vote in the Senate was 37-14. The measure now goes to Gov. Tate Reeves, a Republican, who has said he will sign it.

Mississippi began grappling with the flag once again this spring as a result of the death of George Floyd in the custody of the Minneapolis police, which rapidly evolved into a sprawling expression of fury and exasperation over the countless manifestations of the nation’s tangled racial history.

“This was a long time coming,” Nsombi Lambright-Haines said after applause broke out in the Capitol and a crowd huddled inside tossed aside coronavirus precautions for a brief second and embraced one other.

“I’m glad to see this happen in my lifetime, in my son’s lifetime — in my grandmother’s lifetime,” added Ms. Lambright-Haines, an N.A.A.C.P. volunteer who has been involved in efforts to take down the flag for two decades. (Her grandmother is 96.)

Amid a movement that has brought down monuments of Confederates, colonizers and conquistadors and stripped the names of segregationists from buildings and programs, pressure soon zeroed in on the flag.

Lawmakers were confronted by a cascade of calls from inside and outside Mississippi as opposition coalesced across racial, religious, partisan and cultural divides. Football and basketball coaches paraded through the Capitol urging a change. A varied assortment that included country music stars, the state’s black and white Baptist conventions, civil rights organizations and associations of bankers, manufacturers and librarians also indicated their opposition.

“People’s hearts have changed,” Philip Gunn, the Republican House speaker who was one of the strongest proponents of bringing the measure to a vote in the Legislature, told reporters on Sunday. “We are better today than we were yesterday, and because we are better, we are stronger.”

The legislation sent to Mr. Reeves proposes abolishing the old flag and creating a commission that would design a new one. The new banner would be forbidden from having the Confederate battle emblem and must include the phrase “In God we trust.” The commission would be charged with arriving at a design by September for it to be put up for a vote on the November ballot.

The legislation would mandate the “prompt, dignified and respectful” removal within 15 days of the bill going into effect.

Mr. Reeves, a Republican, said on Saturday that he would sign a bill, which represented the latest evolution in his thinking. He initially said that any decision to change the flag ought to be made directly by voters.

“The argument over the 1894 flag has become as divisive as the flag itself,” Mr. Reeves said in a statement, “and it’s time to end it.”

The legislation cleared a significant procedural hurdle on Saturday as a supermajority in both the House of Representatives and Senate voted to move ahead.

Many lawmakers said removing the flag had an air of inevitability, as Mississippi increasingly looked like a conspicuous holdout as activists pushed to minimize and contextualize the remnants of the Confederacy that have long been on prominent display.

The argument for changing the flag was a moral one for some. Yet the calls for a change resonated more widely because of economic concerns raised by business leaders and moderate Republicans. They contended that Mississippi, as one of the poorest states, could not afford to have barriers turning away outside investment.

The financial threat had been underscored by recent announcements by the National Collegiate Athletic Association and the Southeastern Conference that Mississippi would be precluded from hosting championship events until the flag was changed.

“I don’t know how long I want to sit around and watch Mississippi get kicked around because of a piece of cloth we have hanging over our capitol,” W. Briggs Hopson III, a Republican state senator, told his colleagues before the vote.

The groundswell effort to change the flag belied the extent of the division that still exists over the banner and how to interpret the legacy it symbolizes. Various polls show that, even as the number of people supporting a change has increased, nearly half of the state was resistant to the idea.

“Whether we like it or not, the Confederate emblem on our state flag is viewed by many as a symbol of hate — there’s no getting around that fact,” Jason White, a Republican state representative, said on the floor of the House on Saturday.

Many remain attached to the flag because they see it as an enduring recognition of the blood shed by their ancestors who fought for Mississippi and their pride in the state’s history.

Resistance to the vote has surfaced already: The Mississippi Division of the Sons of Confederate Veterans, in a post on its Facebook page, suggested rallying voters to impede any efforts to replace the flag. “We need to come up with ways to make this as hard on them as possible and make them regret it,” the post said.

One person replied, “I have a flag and it’s not changing.”

Chris McDaniel, a Republican state senator who has been one of the most ardent critics of the legislation, argued that changing the flag represented a dangerous precedent for erasing history.

“To insist that somehow the slippery slope is illogical is to ignore the tide of history,” he said on the Senate floor on Sunday. “Everywhere we look people are seeking these changes and they cannot, will not, be appeased.”

During the discussion in the Legislature, much of the dissent about changing the flag was focused less on an outright defense of it and more about voicing support of a referendum.

Chris Brown, a Republican state representative, said he had heard from many constituents who supported removing the flag but who also wanted to use a statewide vote to send a message about Mississippi.

“They want to show the world that they’re moving on,” Mr. Brown said.

It would be a sharp contrast from the last time the flag was opened to a statewide ballot, in 2001, when voters overwhelmingly decided to keep the flag.

The effort was revived five years ago after a white supremacist killed nine African-American worshipers in a Charleston, S.C., church, prompting the removal of monuments to the Confederacy across the region as well as battle flags on statehouse grounds in Alabama and South Carolina. (Several other Southern states have flags that are regarded as obliquely referencing Confederate iconography, including Alabama and Florida.)

Many cities moved on their own to take down the flag and all eight of the state’s public universities lowered it on their campuses.

Before they voted on Sunday, lawmakers described wrestling with competing emotions about the flag’s meaning and spoke passionately about a desire to unify Mississippi. “That’s what we’ve all prayed for,” said Jerry R. Turner, a Republican representative.

At least one had teared up after the vote as he acknowledged the symbolic power of lowering the flag.

“This has taught us a lesson,” Robert L. Johnson III, the House Democratic leader, told reporters, noting the legislation had bipartisan support that bridged racial and geographic lines. “We’re one Mississippi moving forward.”

The galleries in the House and Senate held sparse crowds because of coronavirus precautions, but the people who were there and waiting in the Capitol corridors erupted into applause as soon as the Senate tally was announced.

Arekia Bennett, a 27-year-old Mississippi native, was overwhelmed with emotions.

“Mississippi had some character decisions to make, and today, we did,” said Ms. Bennett, the executive director of Mississippi Votes, a voting rights organization.

She noted how, after years of pushing, the balance suddenly had shifted in the favor of those wanting to retire the flag to history. “This is progress,” she said, “that no one thought we could make.”