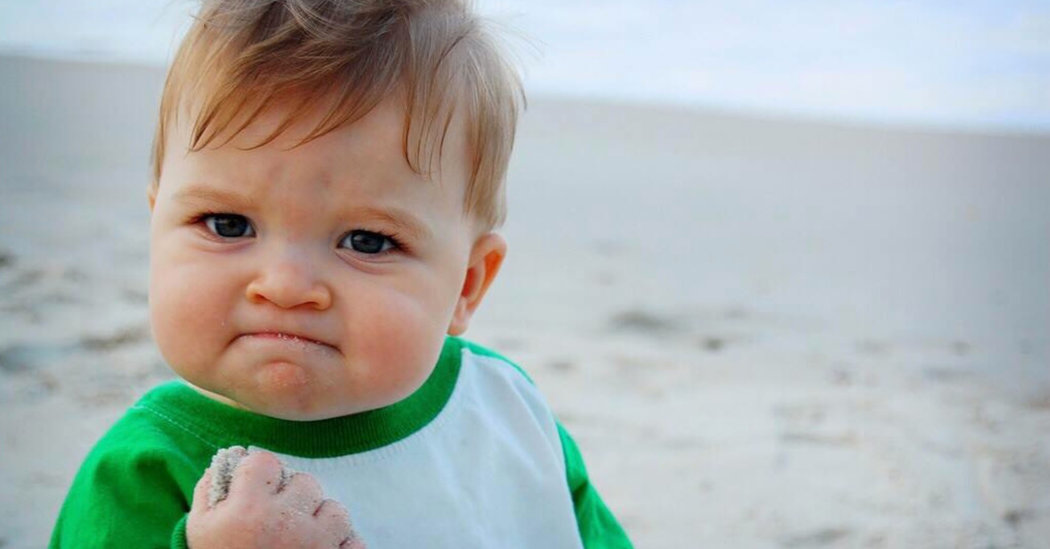 He stares hard at the camera, his clenched fist full of sand. The mother of the boy in this ubiquitous meme sent a cease-and-desist letter to Representative Steve King on Monday, demanding that the congressman remove her son’s copyrighted photo from websites and campaign materials.

The mother, Laney Griner, sent the letter through her lawyer on Monday after discovering that the picture of her son, Sam, had appeared in an ad for Mr. King, a Republican from Iowa with a long history of making racist remarks.

In the original photo, an 11-month-old Sam is on a beach, looking at the camera with an expression of intense concentration and his fist raised. As is the way with memes, the image has been repurposed and shared all over the internet, used by people to express relish over a hard-won victory or demonstrate an iron determination to bounce back.

It is a baby photo that says, “You haven’t seen the last of me.”

Last week, Sam appeared on the King for Congress Facebook page, in an ad that superimposed him over an image of Congress, with the text “Fund our memes!!!”

The post, which appears to have since been deleted, linked to a campaign fund-raising page for Mr. King, hosted by the political action committee WinRed.

In the letter, Ms. Griner’s lawyers said that Mr. King and his campaign had used the meme without permission and “falsely implied” that the meme was “somehow associated with and supports your campaign.”

The letter said that the meme, known as “Success Kid,” had become “a viral sensation beloved by millions of Americans” largely because of “its good-natured, friendly message.”

It said that Mr. King’s use of it “harmed and continues to harm that well-earned good will,” citing his “record of vitriolic criticism.”

The lawyers called for the removal of the image, a public apology for using it without consent and a refund of all funds raised through the post by 9 a.m. Pacific time Wednesday. Otherwise, said Stephen Rothschild, a lawyer for Ms. Griner, they planned to sue in federal court for copyright infringement.

As of Tuesday morning, they had not heard from Mr. King, his campaign or WinRed, Mr. Rothschild said.

“We expect them to do the right thing and apologize for this blatant misuse of my client’s copyrighted work and their attempt to associate Sam with their extremist views,” he said.

Ms. Griner said she learned of the ad through a tweet by Eric Hananoki, a reporter for Media Matters for America, a left-leaning nonprofit. “I would never attach his face willingly to any negative ad,” she said of her son, “but Steve King is just the worst of the worst.”

Alluding to Mr. King’s record of denigrating immigrants and defending white supremacy, Ms. Griner said, “bigotry is just the antithesis of what we want to be the association with the meme.”

Mr. King’s comments have drawn condemnation from both Democrats and Republicans, though for years he was rarely rebuked within his party. Last year, he was stripped of his House committee seats for saying, “White nationalist, white supremacist, Western civilization — how did that language become offensive?”

Ms. Griner, who registered a copyright on the image in 2012, said that she was not averse to the meme being used in political messages by either Republicans or Democrats, but “it would have to be the right message.”

In 2013, the Obama administration, with Ms. Griner’s support, used the meme to promote immigration reform after securing her permission.

Companies like Coca-Cola, Microsoft and Marriot have also made deals to use the meme, and Ms. Griner said the family was relatively lucky compared with other accidental celebrities on the internet. “Not all memes are positive,” she said.

Ms. Griner acknowledged that she could not control how the average person used the image. “You have to accept that your child is a meme that’s just out there, there’s no taking it back, the internet has your picture,” she said.

But she felt especially concerned about the meme’s use, she said, because Sam was a minor at the time of the photo and remains one now. He is 13, and only in the last year has his famous baby photo started to embarrass him.

The picture, taken near the family’s home in Jacksonville, Fla., is actually an action shot, capturing Sam about to stuff his mouth with sand.

Though the “meme era” of copyright cases has only recently begun, so far the courts have held that “there’s nothing special about memes,” said Louis Tompros, a lawyer who represented Matt Furie, the creator of Pepe the Frog, in a case against the conspiracy website Infowars.

“The fact that an image becomes popular does not mean that it loses copyright,” he said. “If the parent of the kid in the meme took the photo, she owns the copyright and does have a copyright infringement claim.”

Usually, he said, people register copyrights on memes either to guard against associations they do not want — as with “Pepe the Frog” — or when there’s money to make with licensing, as with Grumpy Cat, whose likeness appeared on nearly 900 items in an official store.

Mr. Tompros said that the main question in a case like Ms. Griner’s was whether the use of a meme was “transformative” by commenting on the original image.

If the dispute were to reach court, he said, Ms. Griner’s lawyers would most likely argue that the meme was being used merely for fund-raising, which is not fair use.

But the defense, he said, could argue that the meme was being used to comment on the “Success Kid” meme or memes in general. “It’s a closer case, in my view, than the Pepe case,” he said.