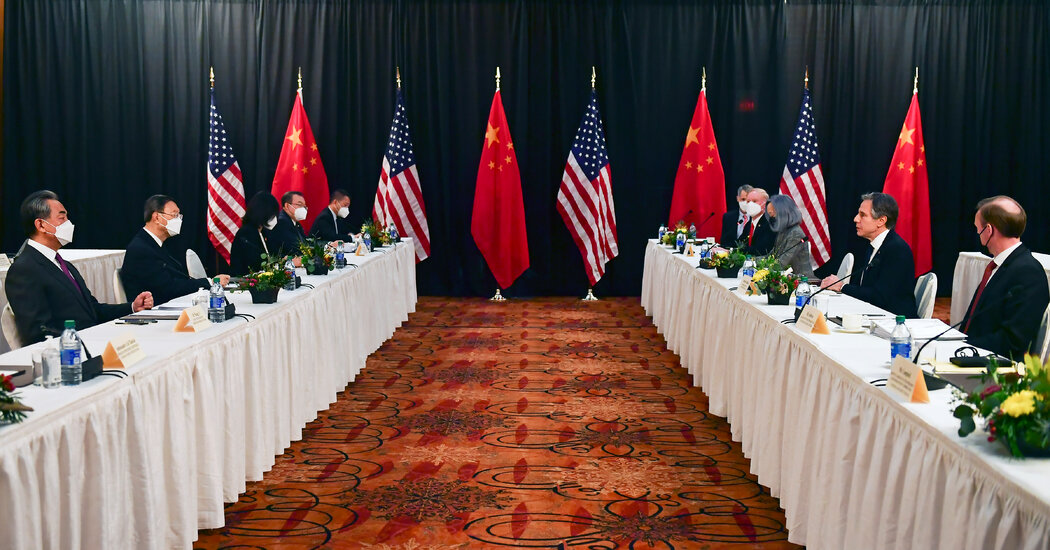 Modest measures can reverse the dangerous decay in relations.

Since taking office nearly two months ago, the Biden administration has been a whirlwind of activity in reforming and revisiting almost every key problem area but one: the chaotic and incoherent China policy it inherited from the Trump administration.

Top U.S. and Chinese officials met Thursday in Alaska for the first time since the new administration took power. The meeting, framed as little more than a chance for each side to state their well-known positions, fell short of even those low expectations.

In a series of blunt remarks, U.S. Secretary of State Antony J. Blinken said that the U.S. government had “deep concerns with actions by China, including in Xinjiang, Hong Kong, Taiwan, cyberattacks on the United States and economic coercion toward our allies” — actions, he said, that “threaten the rules-based order that maintains global stability.” In a lengthy presentation that went well over the agreed-upon time limit, China’s top diplomat, Yang Jiechi, countered that the United States was the “champion” of cyberattacks and that “many people within the United States actually have little confidence in the democracy of the United States.”

These harsh exchanges will only contribute to the dangerous decay in relations between the world’s two most powerful countries. Both sides seem to be trapped by a need to look and sound tough. That stance may play well domestically in both countries, but it complicates doing what is really needed: engaging, with realistic expectations, with the other side.

Now that each government has had its say, the United States should take the high ground and find ways to reduce tensions, even if those can partly be blamed on China’s recent actions.

One way forward would be to reverse some of the Trump administration’s burn-the-bridges measures, like its ending academic exchanges, expelling Chinese journalists and closing consulates.

The Biden administration has sought to characterize its China policy as more nuanced than that of the Trump White House. Shortly after taking office, the president said that the United States sought “extreme competition” with China but not conflict. Mr. Blinken said in Tokyo this week, during his first official trip abroad, “The relationship with China is a very complex one: It has adversarial aspects; it has competitive aspects; it has cooperative aspects.”

But the administration’s actions so far have largely followed the Trump playbook.

Earlier this week, Washington imposed sanctions on 24 Chinese officials for being part of the crackdown on political freedoms in Hong Kong. Yet those officials were carrying out orders made collectively by the Chinese Communist Party. They almost certainly do not have foreign assets, at least not significant ones. These aren’t Russian-style kleptocrats with millions stashed in Switzerland; they are only apparatchiks. Sanctioning them might protect the new administration from charges that it is soft on China, but it will do nothing to change Beijing’s behavior.

Mr. Blinken’s description earlier this month of Taiwan as a “country” will please those who recognize the island-state of 23 million as one of the world’s most vibrant democracies. But China has long claimed Taiwan as part of its territory, something that successive U.S. administrations recognized and tried to finesse by avoiding loaded language like “country.” Before leaving office, the Trump administration reversed this bipartisan policy, instructing officials to use the term when referring to Taiwan, and the Biden administration seems to be following suit.

Mr. Biden’s most effective attempt so far to reorient America’s China policy has been to re-energize U.S. alliances and international commitments. At a virtual summit last week, Mr. Biden and the leaders of Japan, India and Australia stressed the need for coordinated action to counterbalance China’s growing assertiveness in the Indo-Pacific region.

But that leaves unresolved almost all major bilateral issues, including: how to deal with the trade sanctions imposed by the Trump administration; China’s military expansion in the South China Sea; how to handle weapons sales to Taiwan; or what to do about Chinese tech giants, such as Huawei, that offer Western countries technology that is cheap but may be a Trojan horse for Chinese intelligence services.

Washington’s plan appears to be to wait for the results of the comprehensive review of America’s national security policy toward China that Mr. Biden announced in February. This caution is a mistake.

What’s needed are immediate low-rent measures to reverse the downward spiral in the two countries’ relations.

One, the Biden administration should offer to restart the Peace Corps and Fulbright scholarship programs in China, two key ways that Americans have learned about the country over the past decades. The Trump administration canceled both as part of an effort to isolate China. All that accomplished instead was to hurt America’s ability to train a new generation of scholars and analysts.

Two, in exchange for this, the U.S. government should stop vilifying China’s Confucius Institutes as sinister propaganda machines. These are largely cultural centers and much like educational outposts from other countries trying to push a good image of themselves. American universities should prevent Confucius Institutes from offering accredited courses — no university should allow a foreign government to set its curriculum — but the centers should be able to function off campus, much like Germany’s Goethe Institutes or British Councils do.

Three, the Biden administration should allow back into the United States some of the scores of Chinese journalists expelled by the Trump administration last year — provided that Beijing also agrees to welcome again accredited journalists from American news organizations and commits to not harassing them.

The Trump administration’s measures gutted America’s ability to understand China. China, by contrast, still has many reporters and diplomats, and tens of thousands of students in the United States.

Four, the U.S. government should lift restrictions on visas for Chinese Communist Party members wanting to travel to the United States. The policy was crafted to protect Americans from the C.C.P.’s supposedly malign influence. But the party counts some 90 million members, the majority of whom are civil servants doing normal jobs, not followers of some evil cult that needs to be kept at bay.

These are small measures, but they could be meaningful confidence-building steps and pave the way for more constructive exchanges later on thornier problems, such as the threat of war with Taiwan, conflicts in the South China Sea or industrial espionage.

Also: None of these measures are gifts; they require something in exchange. As such, they would serve as a test of Beijing’s willingness to improve relations. If Beijing turns them down, Washington will know much more clearly the scope of the problem.

Modest moves might seem less decisive than acting tough, but they are what, in the end, makes realpolitik real.

Ian Johnson, a 2020-21 grantee of the National Endowment for the Humanities’ Public Scholars program, won a Pulitzer Prize in 2001 for his coverage of China. @iandenisjohnson