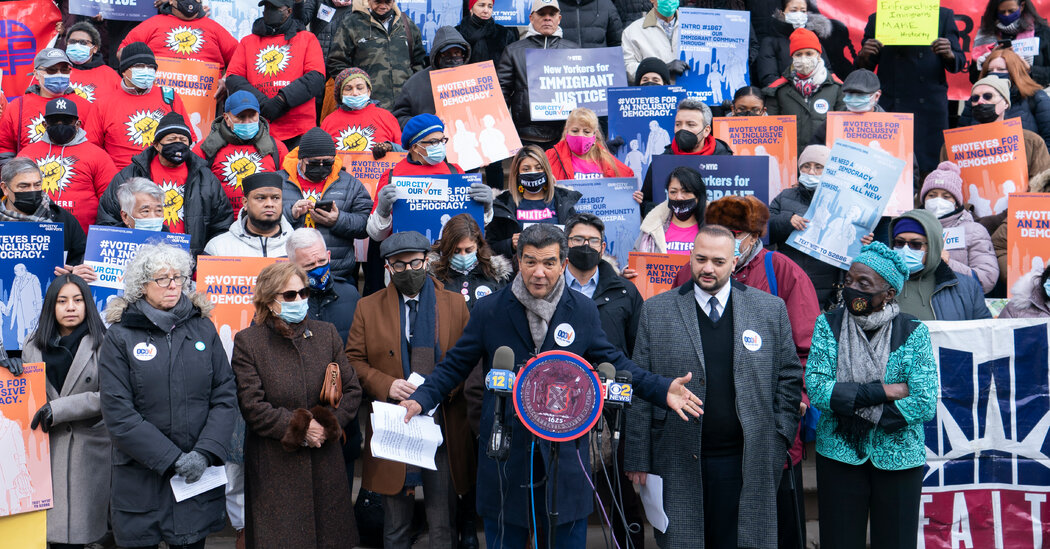 The legislation approved by the City Council will set up a system for legal residents to vote in municipal elections.

New York City became the largest city in the country to allow noncitizens to vote in local elections after the City Council on Thursday overwhelmingly approved legislation granting the right to more than 800,000 legal residents.

The move places New York City at the forefront of the debate over voting rights, serving as a stark contrast to some states that have moved to add voting restrictions, including explicitly barring noncitizens from voting.

The legislation was approved over the objections of Mayor Bill de Blasio, who questioned whether the City Council has the power to grant voting rights to noncitizens. Legal experts expect that the bill could face a legal challenge.

Noncitizens would be able to begin to register to vote a year from now. They could begin voting in local elections as of Jan. 9, 2023, according to the City Council.

The legislation affects those with green cards or the right to work in the United States; it does not entitle them to vote in state or federal elections. Councilman Ydanis Rodriguez, the bill’s primary sponsor, said the law will give more people who live in New York City and pay taxes there a say in how the city is run.

“People who are looking to get elected to office will now have to spend the same amount of time in the communities affected by this legislation as they do in upper-class neighborhoods,” Mr. Rodriguez said in an interview.

Opponents of the bill say that it will usurp power from citizens and will discourage legal residents from pursuing U.S. citizenship.

Americans for Citizen Voting, an organization that was founded in 2019 to oppose efforts to allow noncitizens to vote, sent a letter to the New York City Council this week urging council members to reject the bill.

“We felt we needed to get involved because this is a growing movement across the country,” said the organization’s president, Christopher Arps. “We are not against immigrants — we believe immigrants have built this country. We just feel people should become citizens before they’re allowed to vote.”

Mr. de Blasio has said he would not veto the bill. The bill automatically becomes law if it is not signed in 30 days.

The mayor contended that noncitizen voting is a right that the state would have to grant, a position that many experts disagree with.

Towns in Vermont and Maryland already allow noncitizens to vote in municipal elections. Noncitizens in San Francisco can vote in school board elections and several municipalities in Illinois, Maine and Massachusetts are also considering allowing noncitizen voting.

In New York, the mayor-elect, Eric Adams, has said he supports the rights of green card holders to vote in local elections and has urged passage of the legislation. But he, too, has questioned whether the City Council has the ability to grant voting rights to noncitizens. A spokesman for Mr. Adams said he would review the legislation when he takes office.

Experts say that the New York State Constitution grants voting rights to citizens but does not explicitly prevent noncitizen voting. Noncitizens were allowed to vote in New York City school board elections until the boards were abolished in the early 2000s.

There was an effort to stop the legislation from being approved Thursday when Mark Gjonaj, a councilman from the Bronx, introduced a motion to send the bill back to committee. Mr. Gjonaj said he believed there should be a residency requirement of a year, instead of the bill’s 30-day requirement.

People with 30 days of residency are “transient,” not a “permanent resident” and not a “contributor,” said Mr. Gjonaj, who noted no on the bill.

According to the Mayor’s Office of Immigrant Affairs, of the estimated 808,000 adult New Yorkers who are lawful permanent residents, or green card holders, or have work authorization, 130,000 are from the Dominican Republic and 117,500 are from China.

Laurie Cumbo, a councilwoman from Brooklyn, questioned whether the bill would dilute the voting power of African Americans. “This particular legislation is going to shift the power dynamics in New York City in a major way,” said Ms. Cumbo, who voted no.

The motion to send the bill back to committee failed after a spirited debate on the floor of the City Council; the Council speaker, Corey Johnson, said that any amendments to the bill would render it “technically dead” because there would not be enough time to vote on the bill during this Council session. The legislation passed by a vote of 33 to 14 with two abstentions.

Under the legislation, the New York City Board of Elections, which has faced scrutiny about its handling of elections, would issue a separate voter registration form and provide ballots for noncitizens that only include municipal offices.

Eva Santos, 32, who immigrated to the Bronx from the Dominican Republic at 9 years old and is allowed to live and work in the country through Deferred Action for Childhood Arrivals, a program known as DACA, said she felt a sense of relief and peace of mind when the legislation passed.