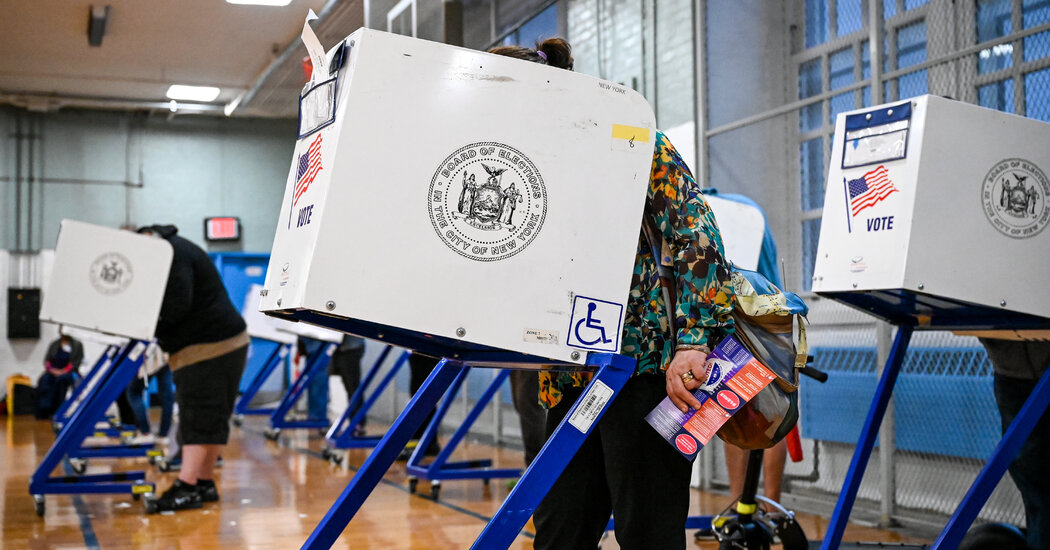 As progressive groups hoped to push the Council to the left, early results showed two of their favored candidates had won and others appeared likely to be elected.

When New York City’s mayor leaves office at the end of the year, more than half the members of the City Council will follow him out the door, leaving a city still finding its footing after the pandemic in the untested hands of a freshly elected mayor and a legislative body packed with newcomers.

It was largely unclear which newcomers those would be when the polls closed on Tuesday: The outcome of many races in Tuesday’s primary was still unknown, though a number of incumbents seeking re-election coasted to an easy victory, with others poised to follow suit.

In most of the races — which are crowded with candidates vying for open seats — no winner was expected to be declared. Absentee ballots have yet to be counted (more than 200,000 were requested), and ranked-choice selections still need to be tabulated. Official results from the Board of Elections are not likely until mid-July.

But the Council is guaranteed to have an impending overhaul after November’s general election, with all 51 seats on the ballot, and a new officeholder guaranteed in 32 of them.

Left-wing activists and leaders have centered much of their energy in New York around Council races they saw as up for grabs. Despite a strong left-leaning base in New York City, residents have tended to be more centrist in their picks for mayor. Indeed, during this year’s mayoral primary, the more moderate candidates appeared to be leading in polls.

At the same time, the Council has drifted to the left of Mayor Bill de Blasio over time. Progressives were hoping they can elect candidates who could be a countervailing force on the mayor and push a progressive platform.

The Democratic Socialists of America, for example, mostly sat out the mayor’s race and focused the bulk of its resources on six City Council candidates.

One of the group’s picks, Tiffany Cabán, who had suffered a narrow defeat in the 2019 primary for Queens district attorney, held a significant lead Tuesday night in the race for District 22 in Queens, though whether she would reach the 50 percent threshold required to avoid a ranked-choice voting tally was unclear.

The Working Families Party endorsed more than two dozen candidates. Three of its choices — Carlina Rivera, a council member from the East Village; Marjorie Velazquez in the Bronx; and Jennifer Gutiérrez, who was the chief of staff for the council member in her district in Brooklyn and Queens — were projected by The Associated Press to win their races. (Ms. Cabán is also backed by the party.)

The Council’s large turnover comes in large part from term limits that prevent members from running again, though a handful of them were on Tuesday’s ballot seeking a different office.

Many of the incumbents seeking re-election faced primary challengers. A handful of them are relatively new to the job, having only won special elections earlier this year, and faced challengers that they just recently edged out.

One such candidate, Selvena Brooks-Powers, was the first candidate in the city to win a race after a ranked-choice count in a special election in February. On Tuesday night, she was projected to win her primary in District 31 in Queens with a decisive lead of thousands of votes.

A number of former City Council members were looking to return to seats they had vacated. One of the best-known, Gale Brewer, the Manhattan borough president, appeared poised to take back the seat in District 6 on the Upper West Side that she held from 2002 to 2013. As of 1 a.m. on Wednesday., she had more than half the votes counted in the race.

In Brooklyn, Darlene Mealy, who represented District 41 from 2006 to 2017, looked like she might take out the incumbent who replaced her, Alicka Ampry-Samuel. Ms. Ampry-Samuel, who was backed by both the United Federation of Teachers and the Working Families Party, was behind by about 2,000 votes.

The Council’s top job will also be open: The current speaker, Corey Johnson, was running for city comptroller and is leaving office. The Council’s members choose their leader, who plays a key role in setting the Council’s agenda and negotiating with the mayor over the city budget. Electing a speaker will be one of the first ways that the winners of Council seats will exert their influence.

Mr. Johnson, who took office in 2014 at the same time as Mr. de Blasio, said on Tuesday that the dynamic made the Council races worth watching closely.

“The Council is going to have to do real oversight over new commissioners that are going to be chosen by whoever the mayor is,” Mr. Johnson said. “So it’s a hugely consequential election.”

In addition to introducing and passing legislation, the City Council provides several checks on a mayor’s power. Council members are influential in the city’s land-use process, which affects development projects in their districts.

The Council can also convene public hearings on contentious issues involving city agencies, and it votes on the city budget, which includes funding for the Police Department, a major focus of progressive activists.

The stakes of the Democratic primaries are particularly high in the city. Only three Republicans serve on the Council, and the winners in nearly every district will be heavily favored to win the general election in November.