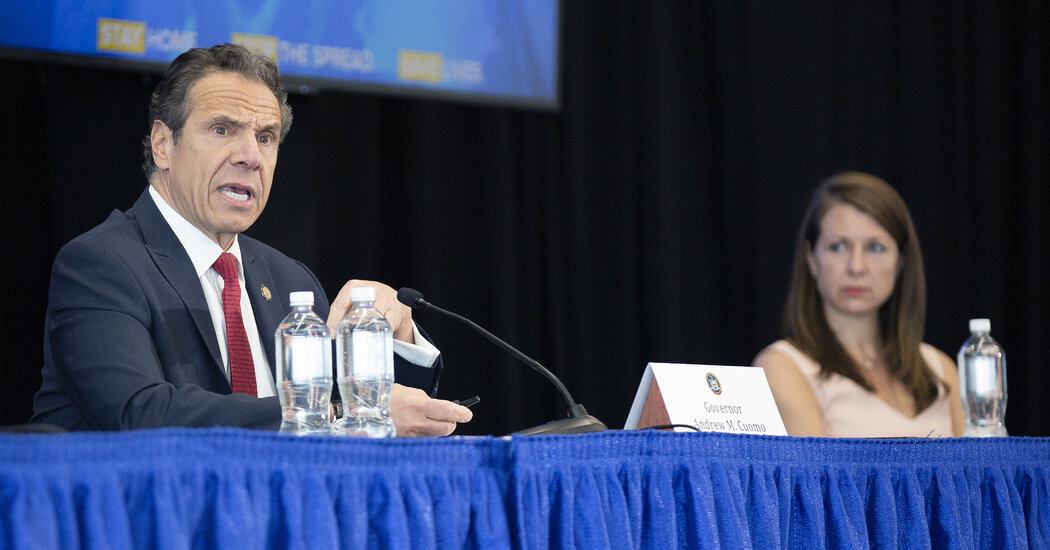 The inquiry has added to the legal pressure faced by Gov. Andrew Cuomo and his aides over the deaths of nursing home residents from Covid-19.

A federal investigation into Gov. Andrew M. Cuomo’s handling of nursing homes during the pandemic has focused in recent weeks on whether the governor and his senior aides provided false data on resident deaths to the Justice Department, according to four people with knowledge of the investigation.

Agents from the Federal Bureau of Investigation have contacted lawyers for Mr. Cuomo’s aides, interviewed senior officials from the state Health Department and subpoenaed Mr. Cuomo’s office for documents related to the disclosure of data last year, the people said.

The interviews have included questions about information New York State submitted last year to the Justice Department, which had asked the state for data on Covid-19 cases and deaths in nursing homes, according to the people. False statements in such a submission could constitute a crime.

In some cases, agents traveled to the homes of state health officials to interview them about the data. In others, they spoke to officials by phone, according to the people, who requested anonymity to discuss the active investigation.

The actions, which came in recent weeks, appeared to add to the legal pressure faced by Mr. Cuomo, as well as by his most senior aides, who may have played a role in withholding the true count of nursing home deaths from the public for months.

A spokesman for the Eastern District of New York, which is overseeing the investigation, declined to comment.

Elkan Abramowitz, an outside lawyer hired by the state to represent the governor’s office in the federal inquiry, said in a statement that “the submission in response to D.O.J.’s August request was truthful and accurate and any suggestion otherwise is demonstrably false.”

Mr. Cuomo has faced scrutiny for months over his policies related to nursing homes. The question of how many nursing home residents had died — both in the facilities and after being treated at hospitals — became a political issue for Mr. Cuomo, a third-term Democrat, as he came under criticism from both Democrats in Albany and from national Republicans, including former President Donald J. Trump.

The state initially publicized only the number of residents who died of Covid-19 inside nursing homes, even after it became aware that thousands more residents had died after being transferred to hospitals.

Aides to the governor said they had not revealed data on residents who died in hospitals because the information was incomplete and needed to be vetted.

The state revealed the full count — which added thousands of additional deaths — only in January, after a report by the state attorney general suggested an undercount, and after a state court ordered the data be made public in response to a lawsuit filed by the Empire Center, a conservative think tank. As of this month, New York has recorded the deaths of more than 15,000 nursing home residents with Covid-19.

Melissa DeRosa, Mr. Cuomo’s top aide, tried to explain why the administration had withheld the data last year to state lawmakers in a conference call, saying she and others “froze” because of the federal request for data, which came in late August as the governor faced criticism over nursing homes.

But more than two months earlier, in June, Ms. DeRosa and other aides removed such data from a report prepared by the Health Department, an investigation by The New York Times found.

A chart included in an early draft of the report, which was reviewed by The Times, showed that the number of total deaths of nursing home residents would have been roughly 9,200 at the time, or 50 percent higher than what Mr. Cuomo’s administration had publicly acknowledged.

The governor’s aides have denied altering the report to withhold the data, arguing that they did not release the figures until they could be properly audited.

In her conference call with legislators, which took place last month, Ms. DeRosa also said that the Cuomo administration had fully cooperated with the Justice Department investigation last year. “They sent a letter asking a number of questions and then we satisfied those questions,” she said, according to a transcript of the conversation released by the governor’s office.

Federal investigators also started questioning state officials this month about a provision in last year’s state budget that gave legal protections to hospitals and nursing homes during the pandemic, one of the people said. Investigators’ questions about the nursing home provision were first reported by The City, a local nonprofit newsroom.

The change made it difficult for families of residents who died or were infected by the coronavirus to sue nursing home operators or hospitals. The provision had been lobbied for by industry representatives.

Richard Azzopardi, a senior aide to Mr. Cuomo, said similar legislation had passed in many other states and that New York’s measure “was passed by 111 members of the Legislature.” He said the legal protections were needed to recruit out-of-state health care workers to help during the height of the surge last spring.

The federal investigation has proceeded alongside a separate inquiry overseen by the state attorney general, Letitia James, into multiple accusations of sexual harassment and misconduct by Mr. Cuomo.

That investigation has appeared to expand in recent days, as Joon Kim, a former federal prosecutor chosen by Ms. James to help lead the inquiry, has begun to ask about efforts to drum up support for the embattled Mr. Cuomo among Democratic county leaders, according to a person with knowledge of the investigation.

Larry Schwartz, a senior adviser to Mr. Cuomo charged with overseeing vaccination planning, made a series of calls to county leaders in which, according to two Democratic county executives, he inquired about their loyalty to the governor. In at least one case, Mr. Schwartz pivoted from politics to a discussion of vaccine distribution.

But amid the swirl of investigations, those whose relatives died in nursing homes during the pandemic have worried that the federal inquiry has remained too narrow to adequately address their concerns over treatment in the nursing homes, and that the state inquiries were not addressing those concerns at all.

“The families have been waiting for an entire year for any semblance of an investigation, a true, deep investigation into what happened,” said Vivian R. Zayas, whose mother died in April after contracting the coronavirus in a nursing home on Long Island. “We’ve been asking for an investigation with subpoena power at the state level, and the calls have fallen on deaf ears.”

Ms. Zayas and other grieving relatives wrote a letter seeking a new and more expansive investigation by Ms. James into the matter.

Under state law, the only statewide elected officials who could give Ms. James a “referral” to commence such an investigation are the governor, who would be unlikely to do so, and the state comptroller, Thomas P. DiNapoli. So the families addressed their letter to Mr. DiNapoli, a Democrat, requesting he issue the referral and work with Ms. James in a joint investigation.

“This would allow New Yorkers to truly learn the full extent of the nursing home crisis,” read the letter, signed by families who are part of Voices for Seniors, an advocacy group. “As citizens of the state, we want to know if and how state resources were used to cover up the number of nursing home deaths, and if so, who ordered it? Did state employees work together to tamper with official documents?”

Jennifer Freeman, a spokeswoman for Mr. DiNapoli, said that his office had received the request and was reviewing it. “New Yorkers who lost loved ones in nursing homes to COVID-19 rightly want more answers,” she said.