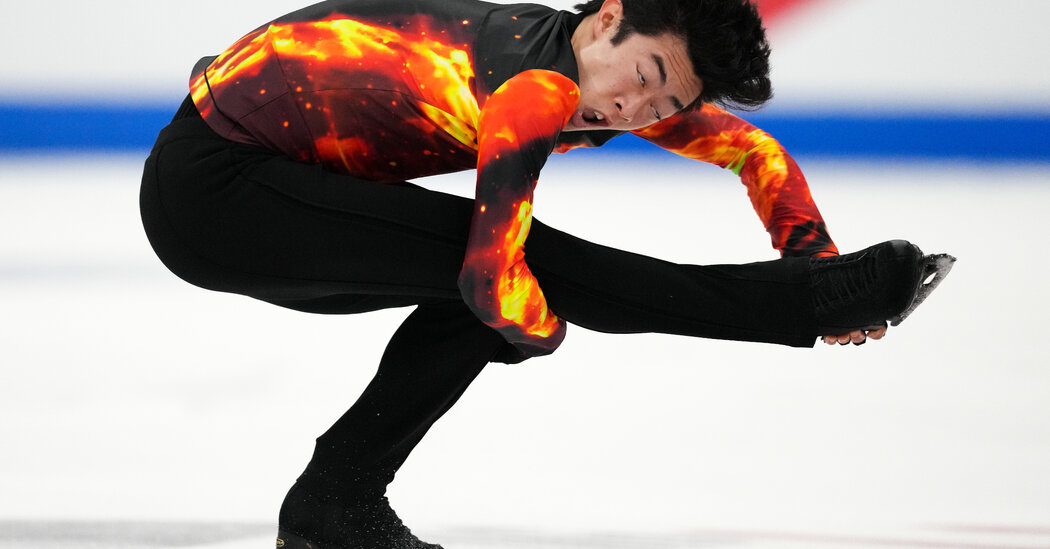 Nathan Chen won his sixth consecutive U.S. national figure skating title and is expected to contend for a gold medal at the Beijing Games.

NASHVILLE — Nathan Chen, one of the most successful figure skaters in U.S. history, skated in his own stratosphere on Sunday at the U.S. national championships.

Five powerful quadruple jumps that launched him high above the ice. Spins as precise as a gyroscope’s. Footwork that flowed like a fast-moving river.

He fell twice — once on a quad jump early in his free skate and again during a foot-tapping choreographed sequence to an Elton John medley — but it did not matter a bit. After his second fall, Chen playfully threw his arms into the air as if to say, aah, whatever.

“Am I to expect that?” Chen said of his mistake in his footwork. “That was just a dumb little moment.”

Who cares that his performance wasn’t perfect. Chen, who has lost only once in more than three seasons, still won his sixth consecutive national title to become the first American man to do so in 70 years. He finished with 328.01 points, 25.53 ahead of second-place Ilia Malinin, the son of two Olympic figure skaters who represented Uzbekistan. Vincent Zhou, the 2019 bronze medalist at the world championships, was third and Jason Brown, a 2014 Olympian, was fourth.

Chen could have finished last at nationals, frankly, and still have been named to the Olympic team for his second Winter Games. He is simply that valuable to the United States as a potential Olympic gold medal winner, and he will be one of the most prominent American names at next month’s Beijing Winter Games.

Hours after nationals ended, Chen, 22, who is from Salt Lake City, was named to the Olympic team. Zhou, 21, and Brown, 27, will join him. It will be the second Olympics for all three men. The squad was chosen on the skaters’ body of work for the past year or so.

Get Ready for the 2022 Beijing Winter Olympics

Just months after Tokyo, the Olympics will start again in Beijing on Feb. 4.

Chen will be the gold medal favorite. He was fifth at the 2018 Olympics after coming back from a disastrous short program to rock the free skate with an amazing six quadruple jumps, adding that sixth quad at the last second just because he could.

Zhou, a 2018 Olympian, is the skater who broke Chen’s winning streak in October when he won Skate America for his biggest international victory yet. At nationals, he performed a spectacular short program for a personal best score, but made several big mistakes in his free skate.

“I was so nervous that my body froze up on me, I couldn’t get things to respond,” Zhou said about his free skate, adding that he and his coaches will go back to Colorado, where he trains, to evaluate what happened and how to fix it before the Olympics. He added that the three American men going to Beijing would give the United States perhaps the strongest male contingent of singles skaters at the Olympics.

Of the men’s team, Brown said, “I’m so incredibly proud of how dense the U.S. field has become.”

Malinin, 17, could have been a surprise pick for the third Olympic spot, but he was named first alternate after his brilliant performance at nationals, where he nailed four quadruple jumps in his free skate and showed the flair and confidence of a veteran.

“I was surprised at how this came together,” Malinin, of Vienna, Va., said of his performance at nationals. His Instagram handle is @quadgOd, and he has vowed to live up to that Quad God nickname.

On Sunday, U.S. Figure Skating also announced the three ice dance teams and two pairs teams that will go to the Beijing Games.

The pairs teams are Alexa Knierim and Brandon Frazier, and Ashley Cain-Gribble and Timothy LeDuc.

Knierim and Frazier did not compete at nationals because Frazier tested positive for the coronavirus last week and remained in his hotel room in isolation.

Of all the American skaters and teams, though, Chen is the best hope for an Olympic gold medal. He is a three-time world champion and a force on the international stage. Japan’s Yuzuru Hanyu, the two-time Olympic gold medalist, is expected to be his biggest rival.

But at these Olympics, with the last several years of dominance in mind, Chen is poised to beat him.

His performance at nationals made that clear.

Under the pressure of trying to avoid the highly contagious Omicron variant as it surges around the world, and after at least six skaters tested positive for the virus at nationals, Chen remained calm and focused.

In the short program on Saturday, he broke his own event record by scoring 115.39 points to put himself in a position to win yet another title. And his fellow top Americans delivered personal-best results. Zhou and Malinin scored more than 100 points, hinting that the U.S. men’s team could be formidable in Beijing.

“There have been many amazing performances that have been done over the history of figure skating, so I can’t say definitively that this is for sure the best, but in my career this is definitely one of the standout few,” Chen said about the short program.

Here at nationals, Chen decided to revert to his 2019-20 programs because, he said, he feels connected and comfortable with them. After losing at Skate America in October with new programs, the move to the old standbys seemed to make sense.

He skated his short program to “La Bohème” and his free skate to snippets of reworked Elton John songs, with the crowd at Bridgestone Arena giving him a standing ovation both times. On Sunday, it looked as if Chen was genuinely having a good time — despite the two falls. When the last beat of music echoed throughout the arena, he laughed and smiled all the way to the kiss-and-cry area to wait for his scores.

“I have these opportunities and I want to make the best of them,” Chen said. “I want to be able to look back on my career some 10, 20 years from now and be like, you know, I really enjoyed the time that I was there. I had a lot of fun on the ice.”