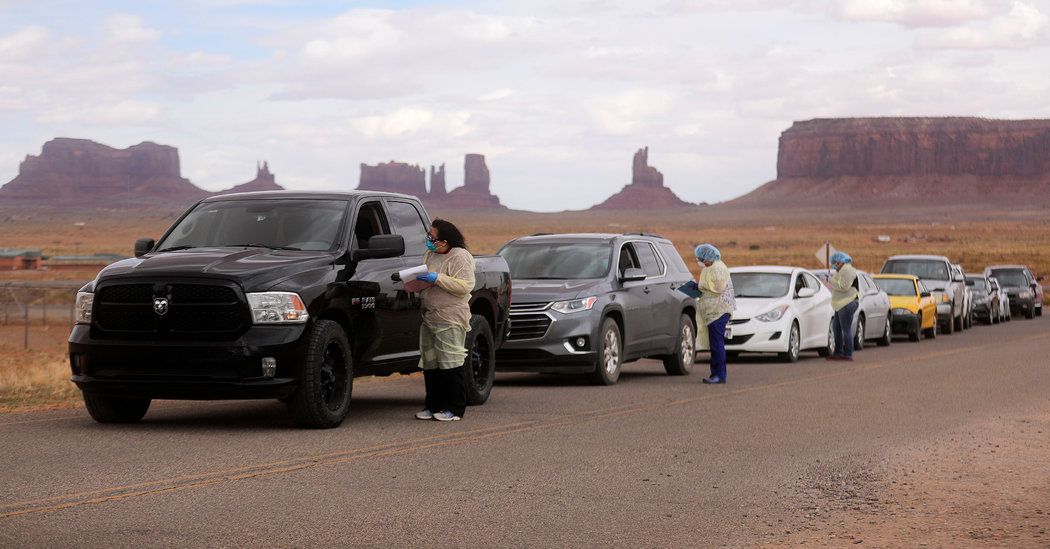 WASHINGTON — A group of Native American tribes is suing the Treasury Department for failing to provide billions of dollars in coronavirus relief allocated for tribes in the $2.2 trillion stimulus package, setting off one of the most significant legal battles between tribal governments and the United States in years.

The human and economic toll of the pandemic has been particularly devastating for tribes across the country, which were already struggling with inadequate federal resources and are now among the most vulnerable and hardest hit by the virus. While the stimulus law mandated that $8 billion be provided to tribes by the end of April, tribal leaders say they have yet to receive any of the money, prompting the lawsuit on Thursday.

But the delay stems in part from a dispute among the nation’s native populations, which are feuding over who is entitled to the aid. It pits Alaska Native corporations, for-profit businesses which serve tribal villages in Alaska, against federally recognized tribal governments in the lower 48 states who argue the corporations should not be eligible for the coronavirus relief.

The Trump administration has sided with the Alaska Native corporations. More than a dozen tribes filed lawsuits last month challenging the Treasury Department’s decision to allow the corporations to apply for the aid, saying they do not meet the definition of tribal governments.

In a ruling on Monday, Judge Amit P. Mehta of the United States District Court for the District of Columbia sided with the tribal governments and issued a temporary injunction to stop funds from being sent to the corporations during the litigation. But on Friday, the Treasury Department wrote in a status report to the court that it “has not yet arrived at a determination” as to how to allocate the money, even as some tribes sought immediate distribution of the funds in a new lawsuit.

The outcome of the lawsuits will dictate how the stimulus funds and any future relief are distributed among the 574 federally recognized tribes, tribal leaders and advocates said. But it also all but guarantees that some of the aid will remain frozen, leaving tribal citizens without critical federal assistance even as the number of virus-related deaths on some reservations eclipses that of entire states.

“I just honestly thought this was the kind of treatment we would still only read about in the history books,” said Chuck Hoskin Jr., the principal chief of the Cherokee Nation, in an interview. “It’s Indian Country unnecessarily having to move heaven and earth to defend itself and to keep from losing ground.”

The lawsuits and delay in providing the tribal aid represent the latest struggle over allocating the trillions of dollars Congress approved as part of the stimulus package, a measure that was hastily negotiated over a period of days. In the aftermath, lawmakers, administration officials, companies and individuals have tangled over who is entitled to various funds — including a small-business loan program that helped several large, publicly traded companies — and how they should be parceled out.

Several lawmakers and aides involved in drafting the stimulus measure said that the intent was to allocate the money only to tribal governments, which were recognized in the Constitution and treaties that ultimately allowed the United States government to seize tribal land. In part because of the land-trust relationship with the federal government, tribes are unable to levy property taxes and rely predominantly on their businesses — which are now shuttered in order to slow the spread of the virus — for a small stream of revenue.

But the more than 200 Alaska Native corporations, which were established in 1971 to manage almost 45 million acres as part of the Alaska Native Claims Settlement Act, and their allies in the state’s congressional delegation, argue that they should be allowed federal relief to help support their mission of providing resources and assistance to the native population there.

“It’s just ridiculous that they would be getting in line to get funds from this,” Speaker Nancy Pelosi, Democrat of California, said of the corporations at her news conference on Thursday. “We need to do more for our tribes.”

Representatives for the Alaska Native corporations expressed disappointment over the court’s initial decision to exclude them from the relief package, saying the move would delay much-needed resources and economic assistance during the pandemic. One corporation filed a motion on Thursday to intervene in the proceedings and be added as a defendant, arguing that a final decision that denied it access to the funds would hinder its ability to take care of its members.

Nathan McCowan, the president of the St. George Tanaq Corporation, said the Alaska Native corporations were responsible for protecting the well-being of tribal members in their state, just as native tribes were in the lower 48 states.

Alaska’s congressional all-Republican delegation — Senators Lisa Murkowski and Dan Sullivan, and Representative Don Young — wrote in an opinion piece late last month that “the law is as clear as the need” and accused critics of “ignoring both law and history” to try to exclude the corporations.

But Nikki Ducheneaux, an enrolled member of the Cheyenne River Sioux Tribe and a lawyer representing some of the tribes in the litigation, said that the size of the corporations could allow them to secure millions of dollars of the funding, prompting an outcry among tribal governments across the country.

“It would be terribly, incredibly unjust to the tribes,” she said in an interview, adding that the court decision “has the potential to resolve an unnecessarily confused and complicated question.”

Tribal leaders and advocates concede that part of the holdup in tribal aid stems from federal agencies and departments unaccustomed to dealing with tribal governments. But, in the words of Senator Jon Tester, Democrat of Montana, lawmakers have also “had one hell of a time getting information” about providing and distributing aid to the tribes.

The situation has been complicated further by a data breach during the application process for the aid that led to the disclosure of private tribal data, and accusations of a conflict of interest in the decision to allow Alaska Native corporations to apply. Tara Sweeney, the first Alaska Native to serve as assistant secretary for Indian affairs in the Department of Interior, previously served as executive vice president of external affairs for the Arctic Slope Regional Corporation, an Alaska Native corporation, prompting some tribal leaders to call for her resignation.

A spokesman for the Department of Interior said Ms. Sweeney was committed to supporting all Native Americans and called assertions that she diverted funds from American Indians “completely false.”

Ms. Sweeney also shot back at Mr. Schumer on Twitter, calling his criticism “an ignorant and despicably low attack that could not be further from the truth.”

“Perhaps you should read the law you negotiated and voted for as Alaska Natives are entitled to receive the funding,” she added.

The $8 billion tranche of funds under the Treasury Department’s purview would help tribes provide critical assistance in securing food and protective equipment, as well as maintain their payrolls and government services to their citizens. Without a swift distribution of the aid, tribal leaders say that they will face steep budget cuts and further loss within their communities.

“It becomes a life or death situation when you don’t have the funding your tribe needs,” said Lance A. Gumbs, the vice chairman of the Shinnecock Indian Nation in New York and an alternate regional vice president for the National Congress of American Indians.