Netanyahu Ex-Ally Nominates Himself to Be Next PM

Netanyahu has clung to power through four hard-fought elections in less than two years, even as he has faced allegations of bribery, fraud and breach of trust


Israeli Prime Minister Benjamin Netanyahu was back in court for his corruption trial on Monday as the country’s political parties were set to weigh in on whether he should form the next government after a closely divided election or step down to focus on his legal woes.

Between witness testimony in a Jerusalem courtroom and the consultations at the president’s office across town, it promised to be a day of extraordinary political drama, bringing into sharp focus Netanyahu’s increasingly desperate efforts to stay in power.

He is Israel’s longest-serving prime minister and has clung to power through four hard-fought elections in less than two years, even as he has faced allegations of bribery, fraud and breach of trust. The March 23 election was largely a referendum on his leadership but produced no clear verdict.

Israel’s political parties, meanwhile, began meeting with President Reuven Rivlin to recommend which candidate should be tasked with forming the next government.

After each election, Israel’s president is responsible for designating a party leader to try to put together a governing majority. That decision is usually clear cut, but Rivlin faces a difficult choice given the fragmented election results that left the Knesset, Israel’s parliament, divided between 13 parties with broad ideological differences.

Neither Netanyahu’s allies nor his foes secured a governing majority. So his fate could come down to Naftali Bennett, a right-wing former ally with whom he has strained ties, and Mansour Abbas, the leader of a small Arab Islamist party who also has yet to commit to either the pro- or anti-Netanyahu blocs.

Later on Monday, Bennett recommended himself as the next prime minister, deepening Israel’s political deadlock. His right-wing Yamina party had been in a position to serve as a kingmaker but it declined to take sides.

Yamina has just seven seats in parliament, making it a long shot to be able to form a governing coalition. Bennett is hoping he can become a consensus candidate who can bridge the deep divides between the rival factions.

Rivlin was earlier quoted by Israeli media as saying he did not see how any ruling coalition could be formed and expressing concern Israel would go into a fifth round of elections. 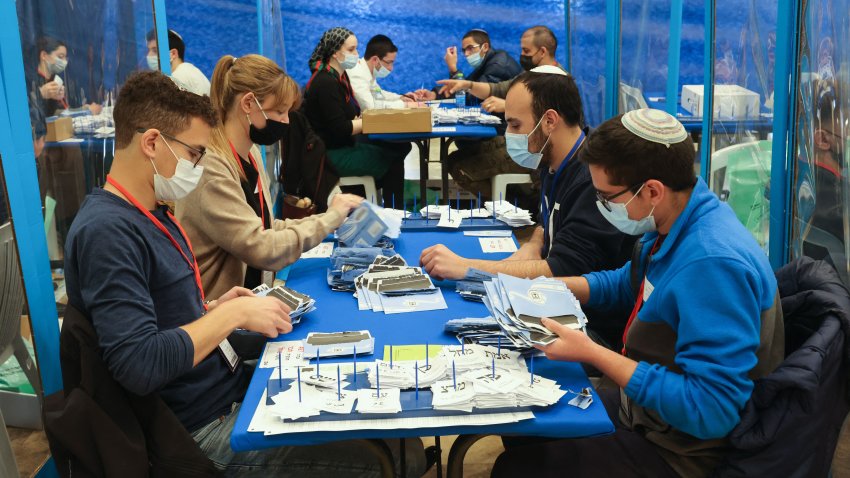 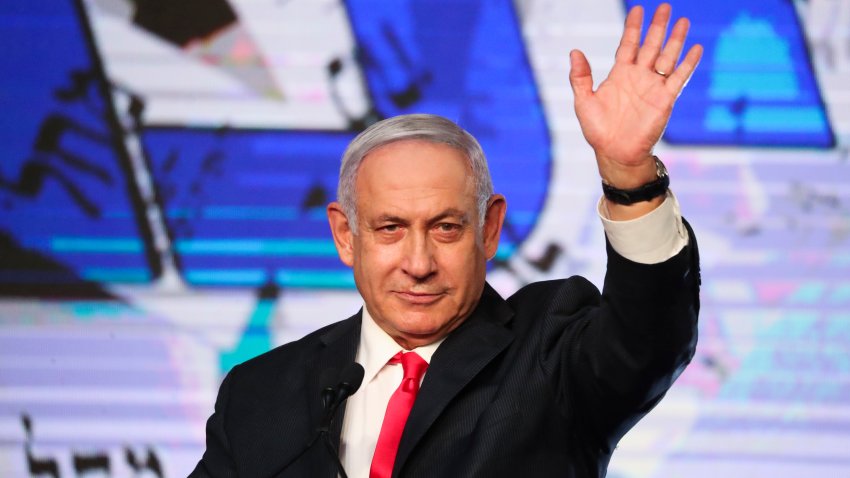 Israel Appears Mired in Deadlock as Votes Are Tallied

At the Jerusalem District Court, Netanyahu sat with his lawyers as lead prosecutor Liat Ben-Ari read out the charges against him.

“The relationship between Netanyahu and the defendants became currency, something that could be traded,” she said. “The currency could distort a public servant’s judgment.”

Netanyahu’s lawyers sought to make a rebuttal but were cut off by Judge Rivka Friedman-Feldman, who said they had already responded to the charges earlier in the trial. The judge then ordered a brief recess, during which Netanyahu left the courthouse.

Outside the courtroom, dozens of supporters and opponents of the prime minister gathered to protest on opposite sides of the building amid heavy police presence, highlighting Israel’s deep divisions. Anti-Netanyahu protesters have held weekly demonstrations for months, calling on him to resign.

Just a few kilometers (miles) away, a delegation from Netanyahu’s right-wing Likud party formally recommended him as prime minister in a meeting with Rivlin.

Netanyahu is charged with accepting bribes, fraud and breach of trust in three cases.

The first involves Netanyahu allegedly receiving gifts worth hundreds of thousands of dollars from wealthy friends, including Hollywood film producer Arnon Milchan and Australian billionaire James Packer. In the second case, Netanyahu is accused of trying to orchestrate positive coverage in a major Israeli paper in exchange for curbing distribution of a free pro-Netanyahu tabloid.

The third, dubbed Case 4000, which will be the focus of Monday’s first witness testimony, alleges that Netanyahu backed legislation worth hundreds of millions of dollars to the owner of Israeli telecom giant Bezeq in return for positive coverage on its news site Walla.

Netanyahu has denied any wrongdoing, dismissing the charges against him as part of a media and law enforcement “witch hunt” to unseat him. His trial began last year and could last for another two years.

In January, prosecutors alleged 315 instances of Walla being requested to amend its coverage so it was more favorable to Netanyahu and his family. They said 150 of them involved Netanyahu himself.

According to the charges, Shaul Elovitch, CEO of Bezeq, “exerted heavy and continuous pressure” on Ilan Yeshua, the former chief editor of Walla, to change articles on the website to meet the demands of Netanyahu and his family.

Yeshua, who took the stand after Netanyahu left, said he regularly received requests from Elovitch and aides to the prime minister, asking him to smear the prime minister’s political opponents, including Bennett. He then passed along the requests to the site’s top editors.

Bennett was referred to as the “naughty religious one” in the internal messages, Yeshua said.

Israeli law does not require prime ministers to resign while under indictment, and Netanyahu has refused to do so. That has left the country deeply divided. An emergency unity government formed last year to address the coronavirus crisis was mired in political bickering and fell apart in less than a year over its inability to approve a budget.

Netanyahu passed Israel’s founding father David Ben Gurion in 2019 as the country’s longest-serving prime minister, having held the office continuously since 2009 and for several years in the 1990s.