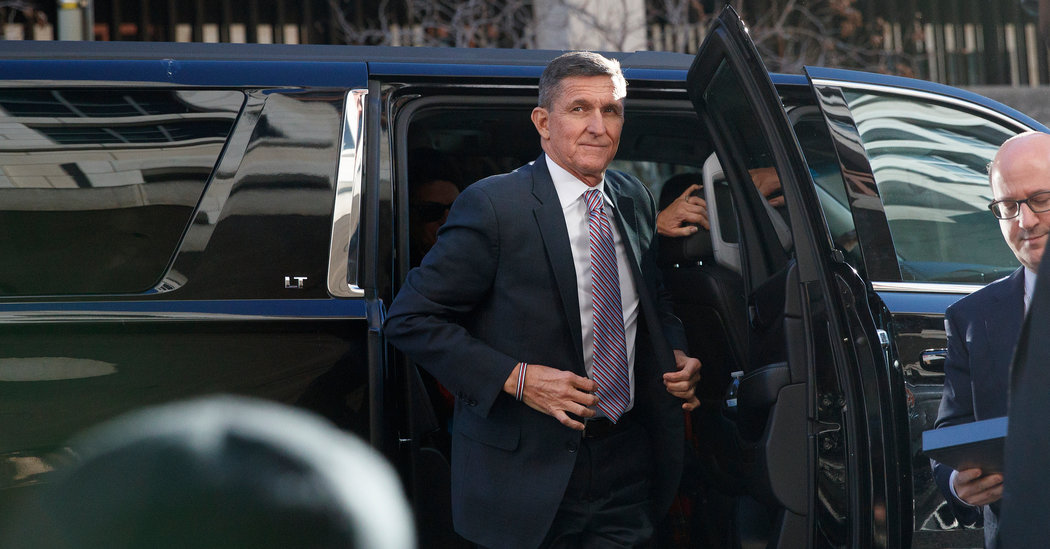 WASHINGTON — The Justice Department’s decision to drop the criminal case against Michael T. Flynn, President Trump’s former national security adviser, even though he had twice pleaded guilty to lying to investigators, was extraordinary and had no obvious precedent, a range of criminal law specialists said on Thursday.

“I’ve been practicing for more time than I care to admit and I’ve never seen anything like this,” said Julie O’Sullivan, a former federal prosecutor who now teaches criminal law at Georgetown University.

The move is the latest in a series that the department, under Attorney General William P. Barr, has taken to undermine and dismantle the work of the investigators and prosecutors who scrutinized Russia’s 2016 election interference operation and its links to people associated with the Trump campaign.

The case against Mr. Flynn for lying to the F.B.I. about his conversations with the Russian ambassador was brought by the office of the former special counsel, Robert S. Mueller III. It had become a political cause for Mr. Trump and his supporters, and the president had signaled that he was considering a pardon once Mr. Flynn was sentenced. But Mr. Barr instead abruptly short-circuited the case.

On Thursday, Timothy Shea, the interim U.S. attorney in the District of Columbia, told the judge overseeing the case, Emmet G. Sullivan, that prosecutors were withdrawing the case. They were doing so, he said, because the department could not prove to a jury that Mr. Flynn’s admitted lies to the F.B.I. about his conversations with the ambassador were “material” ones.

The move essentially erases Mr. Flynn’s guilty pleas. Because he was never sentenced and the government is unwilling to pursue the matter further, the prosecution is virtually certain to end, although the judge must still decide whether to grant the department’s request to dismiss it “with prejudice,” meaning it could not be refiled in the future.

A range of former prosecutors struggled to point to any previous instance in which the Justice Department had abandoned its own case after obtaining a guilty plea. They portrayed the justification Mr. Shea pointed to — that it would be difficult to prove to a jury beyond a reasonable doubt that the lies were material — as dubious.

“A pardon would have been a lot more honest,” said Samuel Buell, a former federal prosecutor who now teaches criminal law at Duke University.

The law regarding what counts as “material” is extremely forgiving to the government, Mr. Buell added. The idea is that law enforcement is permitted to pursue possible theories of criminality and to interview people without having firmly established that there was a crime first.

James G. McGovern, a defense lawyer at Hogan Lovells and a former federal prosecutor, said juries rarely bought a defendant’s argument that a lie did not involve a material fact.

“If you are arguing ‘materiality,’ you usually lose, because there is a tacit admission that what you said was untrue, so you lose the jury,” he said.

No career prosecutors signed the motion. Mr. Shea is a former close aide to Mr. Barr. In January, Mr. Barr installed him as the top prosecutor in the district that encompasses the nation’s capital after maneuvering out the Senate-confirmed former top prosecutor in that office, Jessie K. Liu.

Soon after, in an extraordinary move, four prosecutors in the office abruptly quit the case against Mr. Trump’s longtime friend Roger J. Stone Jr. They did so after senior Justice Department officials intervened to recommend a more lenient prison term than standard sentencing guidelines called for in the crimes Mr. Stone was convicted of committing — including witness intimidation and perjury — to conceal Trump campaign interactions with WikiLeaks.

It soon emerged that Mr. Barr had also appointed an outside prosecutor, Jeff Jensen, the U.S. attorney in St. Louis, to review the Flynn case files. The department then began turning over F.B.I. documents showing internal deliberations about questioning Mr. Flynn, like what warnings to give — even though such files are usually not provided to the defense.

Mr. Flynn’s defense team has mined such files for ammunition to portray the F.B.I. as running amok in its decision to question Mr. Flynn in the first place. The questioning focused on his conversations during the transition after the 2016 election with the Russian ambassador about the Obama administration’s imposition of sanctions on Russia for its interference in the American election.

The F.B.I. had already concluded that there was no evidence that Mr. Flynn, a former Trump campaign adviser, had personally conspired with Russia about the election, and it had decided to close out the counterintelligence investigation into him. Then questions arose about whether and why Mr. Flynn had lied to administration colleagues like Vice President Mike Pence about his conversations with the ambassador.

Because the counterintelligence investigation was still open, the bureau used it as a basis to question Mr. Flynn about the conversations and decided not to warn him at its onset that it would be a crime to lie. Notes from Bill Priestap, then the head of the F.B.I.’s counterintelligence division, show that he wrote at one point about the planned interview: “What’s our goal? Truth/admission or to get him to lie, so we can prosecute him or get him fired?”

Mr. Barr has also appointed another outside prosecutor, John H. Durham, the U.S. attorney in Connecticut, to reinvestigate the Russia investigators even though the department’s independent inspector general was already scrutinizing them.

And his department has intervened in a range of other ways, from seeking more comfortable prison accommodations last year for Paul Manafort, Mr. Trump’s former campaign chairman, to abruptly dropping charges in March against two Russian shell companies that were about to go to trial for financing schemes to interfere in the 2016 election using social media.

Mr. Barr has let it be known that he does not think the F.B.I. ever had an adequate legal basis to open its Russia investigation in the first place, contrary to the judgment of the Justice Department’s inspector general.

In an interview on CBS News on Thursday, Mr. Barr defended the dropping of the charges against Mr. Flynn on the grounds that the F.B.I. “did not have a basis for a counterintelligence investigation against Flynn at that stage.”

Anne Milgram, a former federal prosecutor and former New Jersey attorney general who teaches criminal law at New York University, defended the F.B.I.’s decision to question Mr. Flynn in January 2017. She said that much was still a mystery about the Russian election interference operation at the time and that Mr. Flynn’s lying to the vice president about his postelection interactions with a high-ranking Russian raised new questions.

But, she argued, the more important frame for assessing the dropping of the case was to recognize how it fit into the larger pattern of the Barr-era department “undercutting the law enforcement officials and prosecutors who investigated the 2016 election and its aftermath,” which she likened to “eating the Justice Department from the inside out.”