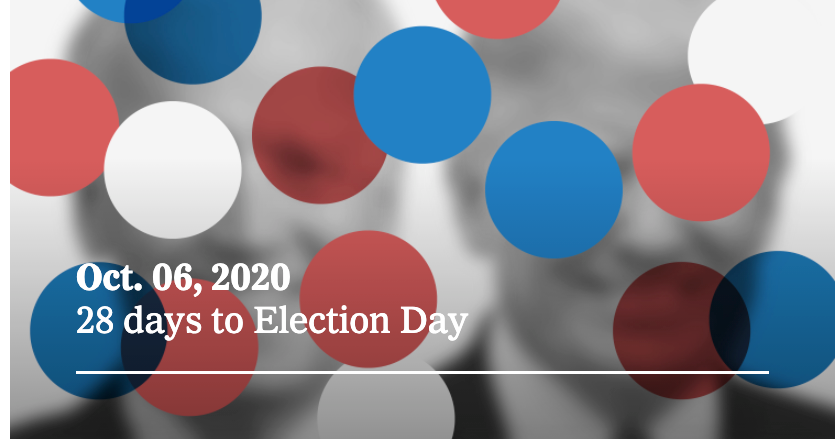 Monday was a fairly slow day of polling. So slow, in fact, that some of the most interesting news of the day came from a poll that hasn’t even been fully released yet.

The handful of results we did receive confirm that the president’s coronavirus diagnosis has done little to win him sympathy or reshape the race. If anything, things have moved a point or two toward Joe Biden since the first debate.

The state polls weren’t much better for Trump. A Times/Siena survey found Mr. Biden with an eight-point lead in a state (Arizona) that President Trump carried by nearly four points in 2016. Needless to say, that’s a miserable result for the president. If there’s any consolation for him, it’s that it’s actually a point closer than the nine-point deficit he faced in the last New York Times/Siena poll in Arizona.

Meanwhile, Ipsos found Mr. Biden up by six points in Wisconsin and by five points in Pennsylvania. Those results aren’t so terrible for Mr. Trump compared with other polls, but the trend line is favorable for Mr. Biden, who improved over his prior result in both states. In fact, the last Ipsos result in Pennsylvania — Biden+3 — was one of Mr. Trump’s best results of the month.

Tomorrow, a big one in Pennsylvania. On Tuesday, we expect a Monmouth poll out of Pennsylvania. It’s a big one. Last time, it found Mr. Biden up by just three points in the state, one of the president’s best results of the month. If Monmouth shows a larger lead for Mr. Biden — as recent Times/Siena, ABC/Washington Post and YouGov polls have — Mr. Trump’s path to the presidency will plainly be in serious jeopardy.

We might have gotten a clue of tomorrow’s result in the form of a Monmouth poll on Monday of New Jersey’s Second Congressional District, which flipped from Barack Obama to Mr. Trump in 2016. Mr. Biden led by four or five points in the poll, depending on turnout estimates, and while we are quite sure that New Jersey and Pennsylvania are different places, a strong result for Mr. Biden in New Jersey’s Second may bode well for his standing in neighboring Pennsylvania.

Today’s CNN/SSRS national poll hints at a terrible result for Trump tomorrow. CNN released part of its new national survey Monday, and it had a terrible number for the president: a minus-17 approval rating. It didn’t release the result of the question testing Mr. Biden versus Mr. Trump, but if you dig a little deeper, it’s pretty clear Mr. Biden’s up by double digits.

How can you tell? Well, CNN released a 16-page document of crosstabs from the poll today, which lets people like me look at how various subgroups — men, women, college graduates, white people and so on — answered individual questions.

And if you scroll to Page 10 of that document, as I obviously did, you’ll see Table 008 Question A1, which lists Mr. Trump’s approval rating for different groups of voters. The president’s approval rating was broken down into two groups: Trump voters and Biden voters. With that information — the president’s overall approval rating, and his approval rating among Biden and Trump supporters — we can get a pretty good estimate for the results of the poll Tuesday. It can’t be perfect — for one, we don’t know how many undecided voters were in the survey or whether they approved of the president, and rounding is a minor issue — but we can definitely get in the ballpark.

Take the president’s 40 percent approval rating. According to the poll, the president is getting positive job approval from 3 percent of Biden voters and 92 percent of Trump supporters. If, for the moment, we stipulated that there were no undecided or third-party voters, we could make a rough guess of the results of the survey. For those who like math, the algebra is straightforward: 40 = 92x+3(1-x), where x is the president’s share of the vote in the poll. If you solve for x, then the president has 41.6 percent, with 58.4 for Mr. Biden. Run the same math on the president’s disapproval, and you get Biden 57.3, Trump 42.7. Those are 17- and 15-point leads.

Now, there are some undecided voters, of course, and we don’t know whether they approve or disapprove of the president. But CNN doesn’t usually have many undecided voters, so we’re almost certainly talking about a double-digit lead for Mr. Biden. And if you take the average of their last two polls, you’d guess it’s quite a bit larger than a 10-point Biden lead. Maybe even 15. We’ll find out the real result soon enough.

That’s obviously a bit of an outlier, but … NBC/WSJ had it Biden plus-14 on Sunday.