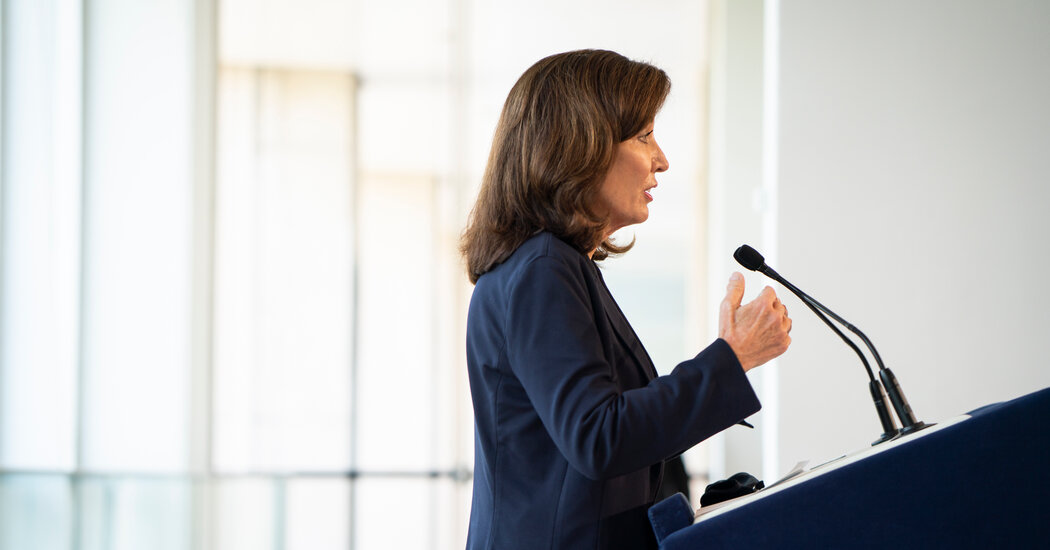 Just a year ago, a surge in virus cases like the one now coursing through New York would most likely have sent the state into lockdown, with government officials halting indoor dining, closing offices and shuttering schools as they urged residents to stay home.

But this week, Gov. Kathy Hochul appraised the situation in what is again among the nation’s pre-eminent Covid-19 hot spots, with a record-setting 29,000 new cases reported on Wednesday, and advised vaccinated New Yorkers to remain calm and soldier on.

“Our goal is to not let anything shut down,” Ms. Hochul said, urging vaccination and other, more modest, precautions. “Isolation is terrible. It’s just so excruciating what people had to go through last year.”

Mayor Bill de Blasio and his imminent successor, Eric Adams, have been just as unequivocal in New York City: “Adamantly, I feel this: No more shutdowns,” Mr. de Blasio said on Tuesday.

The difference in tone and policy between now and last December could hardly be more stark, and Democrats, including Ms. Hochul and President Biden, have been eager to accentuate it. They are seeking to balance managing another huge health challenge with reassuring an anxious public that they are not interested in revisiting polarizing and politically risky lockdowns that could undermine the continuing recovery.

Ms. Hochul and New York City leaders attribute most of the change in messaging to widespread vaccination. Since the depths of last winter’s Covid surge, 82 percent of New Yorkers have received at least one vaccine dose, giving them a measure of protection against serious illness and death, and state and city leaders have adopted a series of inoculation mandates.

But the current tone also reflects a series of political and health gambles: that the Omicron variant, while highly transmissible, will prove more transient and less lethal than earlier Covid waves; that New York’s strained testing and health care infrastructure will not buckle; and that New Yorkers, exhausted by pandemic whiplash, will once again voluntarily tamp down transmission.

The swiftness with which the situation is worsening — amid evidence that testing capacity has struggled to keep up with the rising caseloads — could yet upend the delicate balancing act, risking intense political blowback for Mr. de Blasio, who has moved toward a run for governor; Mr. Adams, who will soon become mayor; and Ms. Hochul, who is running for a full term.

Most of the new cases in the state are in New York City, adding hundreds of patients to a hospital system struggling in some instances with outbreaks among staff members. An increase in deaths could follow, although health experts continue to assess the risk posed by Omicron.

“Our elected officials are now having to walk this line between keeping people healthy, while understanding the level of anxiety and PTSD that people are dealing with,” said Dan Sena, a Democratic strategist who helped guide the 2018 Democratic takeover of the House. “That leads to broader messaging around safety and how you keep yourself healthy, but really understanding where people are, which is just tired and frustrated.”

As coronavirus cases dipped and vaccination rates increased over the past year, other issues seemed to supplant the virus. When Ms. Hochul took office in August, she appeared just as focused on healing a state fraying from social and economic unrest as she was on the pandemic. Mr. Adams won the mayor’s race by emphasizing public safety. And Mr. de Blasio has promoted his education record.

Now, all three find themselves once again diverted by a health crisis the country has struggled to leave behind, forced to mediate between those who believe the state should return to 2020-style lockdowns and those who oppose any government intervention.

“None of us thought, for those of us taking office in January, that Covid would be a raging crisis still,” said Mark D. Levine, the incoming Manhattan borough president. “Many of the policies we need to enact to keep the public safe are going to be unpopular, but what we’ve learned is we have to act decisively and quickly and not put our finger in the wind, or the virus wins.”

At the moment, no major political leader appears interested in employing some of the blunter tools used during previous surges. Public health officials credit widespread closings with saving lives, but the measures inflicted serious economic harm from which the state is still recovering, strained parents’ nerves and stirred a political backlash that helped Republicans win elections in territory typically friendly to Democrats.

Instead, Democrats in New York and elsewhere have shifted to pushing individuals and businesses to use the defenses now at their disposal — vaccines, masks, testing and contact tracing — and to continue life closer to normal, while preparing to reinforce hospitals if needed.

Mr. Adams, who has emphasized the importance of vaccines, has also signaled that he would approach questions about shutdowns and some mandates through the lens of their economic impact on the blue-collar New Yorkers who helped power his victory and often cannot work from home.

“Covid is becoming part of our normality,” Mr. Adams said in an interview with MSNBC this week. “Do we shut down every time we have a new variant?”

That outlook could also mean a heightened focus on personal responsibility and a reduced emphasis on mandates, according to an adviser to Mr. Adams who spoke on the condition of anonymity to discuss private deliberations about a rapidly evolving issue.

Ms. Hochul and those challenging her face a more complicated landscape in a regionally and politically diverse state. Even some Democrats are reluctant to impose mask mandates, while Republicans trying to wrest back control of the State Senate and governor’s office continue to cast even relatively modest steps by Democratic officials as overreach.

Many Republican county executives have said they will not enforce a statewide indoor mask mandate recently enacted by Ms. Hochul. Bruce Blakeman, the incoming Republican county executive in Nassau County, urged people to get vaccinated, but he said he did not “think government should be in the business of making health care choices for individuals.”

The Omicron variant. The highly transmissible Covid strain appears to be less severe than previous variants, according to new studies. Research also suggests many non-mRNA vaccines offer almost no defense against infection, though the Pfizer and Moderna boosters, which are mRNA-based, likely provide strong protection.

The holiday season. With planned end of the year gatherings, the new Covid surge is prompting worries and cancellations. The Times asked experts to share some holiday guidance, as well as some tips on using at-home Covid tests (if you can find any). Here is what to do if you test positive for Covid.

While Ms. Hochul’s mask rule has pleased those who are most alarmed about the virus’s spread, she has pointedly declined to press for the kind of enforcement that would inflame tensions in more conservative parts of the state. She has also been careful to stress collaboration and to remind New Yorkers that any steps she is asking them to take are in the service of popular goals like keeping children in school.

That has not insulated her from a chorus of second-guessing from within her own party, particularly on the left.

Jumaane Williams, the New York City public advocate and a candidate for governor, has called for Mr. de Blasio to close city schools before the holiday break and to have city employees work remotely as an example for private employers. He said the state’s leaders were “getting caught flat-footed.”

“I will give credit to both the mayor and the governor standing behind the vaccine requirements,” Mr. Williams said. “But as we know now, simply relying on and counting how many people are vaccinated is not enough.”

Representative Tom Suozzi, a Long Island Democrat who is also running for governor, has accused Ms. Hochul of moving too slowly and of sending muted messages in the face of the surge in cases.

“There are political consequences that will come from this lack of executive experience,” Mr. Suozzi said. He added: “People are unhappy because their holidays, everything is in turmoil.”

New Yorkers are already frustrated at the pace of testing, particularly in the city, where residents have waited hours for swabs despite a record number of tests being administered in recent days.

“We can, of course, have discussions on whether we should shut down, what’s in the best interest of the public’s health and safety, but we really can’t have those conversations adequately until we provide testing for everyone,” said Representative Grace Meng, a Queens Democrat. “Our country, and our city, is very behind right now.”

The mayor and governor have moved to open new testing sites. Ms. Hochul, who this week outlined a plan for addressing the holiday surge, has pledged to distribute more than 30 million at-home tests in the coming weeks, with millions earmarked for schools.

If Ms. Hochul can navigate the winter surge with limited fatalities while preserving the economy, it could help burnish her image at a time when New Yorkers are still getting acquainted with her.

“It’s a totally different time, and she’s doing totally different work,” said Stu Loeser, a longtime New York political operative. “Eighteen months ago, people needed hope to go on; today people need to be reminded how far we’ve come and how we now have the tools to get through this if people use them.”