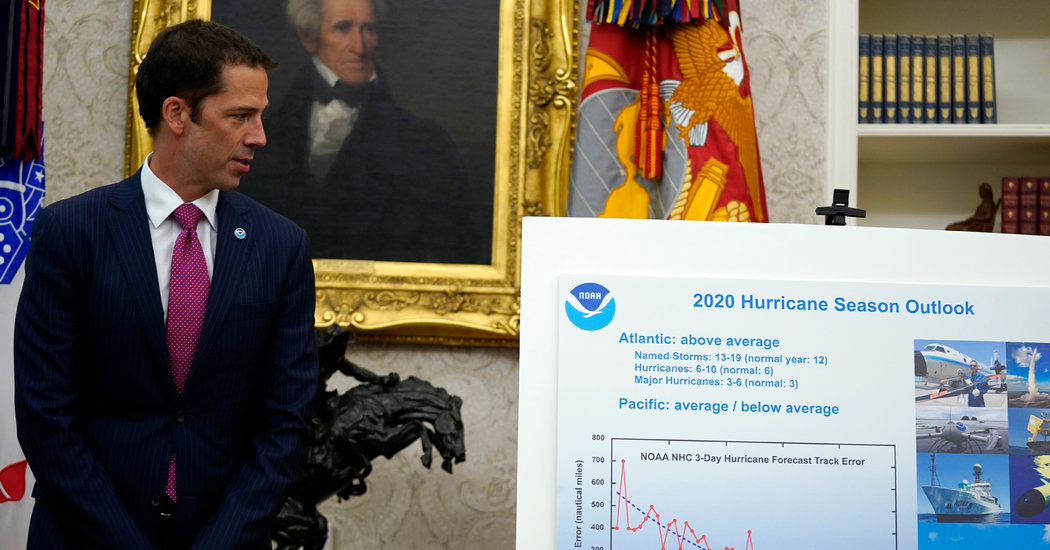 WASHINGTON — The head of the National Oceanic and Atmospheric Administration violated the agency’s code of ethics in the fall when he rebuked employees for contradicting President Trump’s inaccurate claim that a hurricane would hit Alabama, NOAA said Monday in a report.

Neil Jacobs, NOAA’s acting administrator, “engaged in the misconduct intentionally, knowingly, or in reckless disregard” for the agency’s scientific integrity policy, according to a panel commissioned by the agency to investigate complaints against him.

On Sept. 1, Mr. Trump wrote on Twitter that Hurricane Dorian, which was then approaching the East Coast of the United States, would hit Alabama “harder than anticipated.” A few minutes later, the National Weather Service office in Birmingham, Ala., which is part of NOAA, posted on Twitter: “Alabama will NOT see any impacts from Dorian. We repeat, no impacts from Hurricane Dorian will be felt across Alabama.”

Alabama was not struck by the hurricane.

That unsigned statement turned out to be the result of pressure from the White House on Commerce Secretary Wilbur Ross, who oversees NOAA and who threatened to fire the political staff at NOAA unless the contradiction of Mr. Trump was addressed.

In Monday’s report, Stephen M. Volz, an assistant administrator at NOAA who was chosen to review the complaints and make recommendations, called for the agency to better ensure “the right of NOAA scientists to review, comment, and amend any official communication that relies on their scientific analysis.”

Mr. Volz also recommended that the agency create a formal agreement guiding interactions between NOAA and Department of Commerce officials, “acknowledging the responsibility for NOAA to own the scientific content and allowing for Commerce to weigh in on policy content.” And he called for NOAA’s senior leadership and political officials “to take scientific integrity training” and then sign a statement saying they would follow those principles.

Scott Smullen, a spokesman for the agency, said that NOAA “welcomes the report and its recommendations, which would strengthen the policy of consulting NOAA scientists in developing communications materials involving their expertise.”

“Scientific integrity is at the core of NOAA’s work and is essential for maintaining the public’s trust in the agency’s ability to provide accurate, thorough and timely science,” Mr. Smullen added.

Craig McLean, the agency’s acting chief scientist and one of the people whose complaints prompted the review, said the process “demonstrated that scientific integrity is at the core of NOAA’s mission and culture and is essential for us to maintain the public’s trust.”

The White House and the Department of Commerce did not respond to requests for comment.

The findings prompted criticism from Democrats as well as science advocates.

Michael Halpern, deputy director of the Center for Science and Democracy at the Union of Concerned Scientists, said the report confirmed what was already known, but stopped short of providing accountability. “In the immediate term, there are no consequences for the senior leaders who betrayed their scientific staff,” Mr. Halpern said.