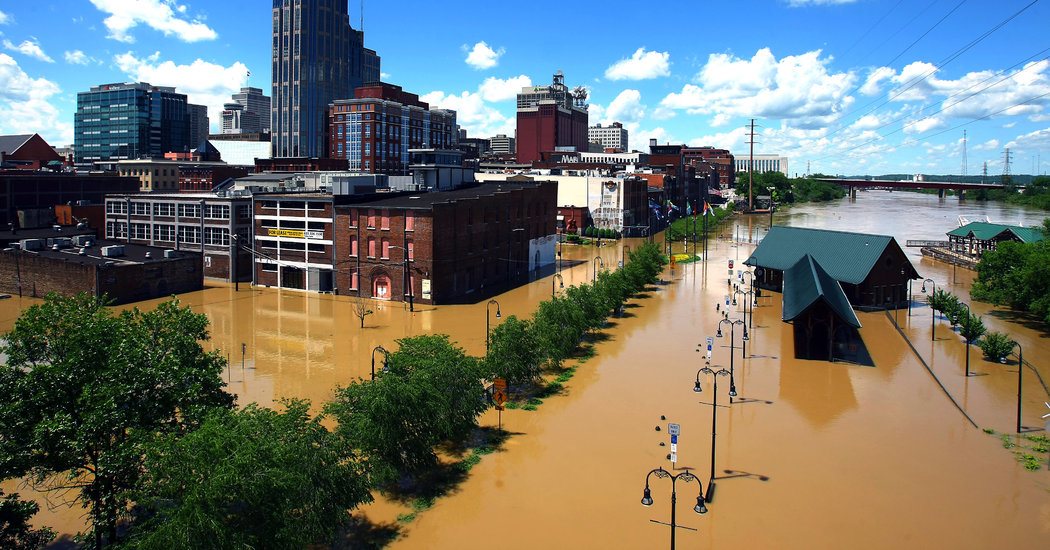 NASHVILLE — On the Saturday I had set aside to visit a new exhibit at the Frist Art Museum, it rained so hard I was afraid to leave the house. Nashville was built on the Cumberland River, and even those of us who live far from its banks are invariably a stone’s throw from at least one creek that drains into the great Cumberland or one of its tributaries. A deluge falling on saturated soil will flood the creeks and leave water pooling on low-lying roads. “Turn Around Don’t Drown” is a truism I conscientiously heed.

The exhibit I planned to visit that day, ironically enough, was a retrospective of the devastating 2010 flood that dropped more than 13 inches of rain on this area in 36 hours — twice the amount of rain that fell during the previous two-day record. The Cumberland River crested more than 11 feet above flood level, leaving 10,000 people in the region displaced and 26 others dead, including an elderly couple who drowned when their car was swept off the road not far from my house.

Area landmarks were shut down for months. Opry Mills, a massive mall on the banks of the Cumberland, was closed for nearly two years. Nearby, the Opryland Resort & Convention Center had to evacuate 1,500 hotel guests, and the first floor of the Grand Ole Opry House itself was completely submerged. Twenty-four feet of water entered the Schermerhorn, Nashville’s transcendently beautiful symphony hall, where the losses included two Steinway concert grand pianos. Soundcheck, a sprawling rehearsal and equipment-storage facility in East Nashville, took a nearly fatal blow, with millions of dollars of instruments — belonging to both session musicians and industry superstars — lost to the water. It all felt almost personal: What would Music City be without the music?

The cleanup took months and resulted in 111,000 tons of debris. But the rescue efforts and the following recovery are a legacy of the flood that Nashvillians are proudest of. The self-described “Redneck Armada” used their own boats to rescue strangers and carry them to higher ground. Garth Brooks performed nine sold-out benefit concerts — nine of them — and raised almost $5 million for flood relief. Volunteers, some 29,000 strong, worked for months to help both neighbors and strangers recover. Flood-ravaged Nashville was the biggest small town in America.

At the Frist, “The Nashville Flood: Ten Years Later” occupies an entry-level gallery that’s free to the public. It includes photographs taken both during and after the flood, oral-history testimony from survivors, a map showing the hardest-hit areas and an interactive before-and-after display of city scenes. There’s even a flood-damaged guitar from Soundcheck. It’s multisensory history at its best.

It’s also a devastating reminder of an event that reshaped the contours of civic life: the water shortages caused by inundated water-treatment facilities, the roads closed because bridges had been washed away, the mildewed carpet and drywall piled up in mountains in virtually every neighborhood in town, the funerals. Days and days of funerals.

And yet nobody outside Nashville seemed to have any idea at all of what was happening to us. If you’ve never heard of the Nashville flood, you are far from alone. The national media completely ignored the catastrophe as it was happening. A few days after the sun came out, we began to see short reports here and there — a brief article by The Associated Press, an essay by Ann Patchett for The Times. Days later, Anderson Cooper finally showed up. “When Anderson Cooper is late to your local disaster,” Jeff Severns Guntzel pointed out in the Utne Reader, “you know something is wrong.”

It’s worth asking, even now, what was wrong. Partly it was timing: On May 1, the day it began to rain in Nashville, an attempted terrorist attack was thwarted in Times Square. Ten days earlier, B.P.’s Deepwater Horizon oil rig had exploded, leaking 200,000 gallons of oil a day into the Gulf of Mexico. The massive oil slick that resulted was due to hit the fragile Gulf Coast just as the rain began to fall in Nashville.

No question, both of those stories deserved every bit of ink and footage and pixels they engendered. But when a major American city gets hit with a natural disaster that kills more than two dozen people and drives 10,000 others from their homes, and the national news media responds with a shrug, something more than limited bandwidth or disaster fatigue may be to blame.

Perhaps it’s just that Nashville hadn’t yet captured the national imagination the way it has in recent years. “Nashville” the television show was still more than two years away from its premiere on ABC, and The Times was still nearly three years away from crowning this town “it” city. On May 1, 2010, Nashville was just a midsize American city in flyover country, and when something bad happens in flyover country, the feeling everywhere else seems to be that we somehow brought it on ourselves.

God knows we’re guilty, here in the red states, of inadequate environmental policy, of shoot-yourself-in-the-foot governance, of staying put when the smarter thing would be to leave. There are complicated reasons for those decisions, reasons not easily summed up in a single news story. But none of it should prevent a compassionate response to another human being’s suffering or admiration in the face of another human being’s heroism. The Redneck Armada saved countless lives, whatever you might think you know about “rednecks” in general. In any case, Nashville could not have made the rain stop falling any more than California can keep the San Andreas fault from shifting.

A decade ago, we got hit by a “thousand-year flood,” but we know now that such estimates no longer hold. Nashville has taken measures to mitigate the damage of the next flood because we know there will be a next one. Smaller, poorer towns will simply have to hope for the best. That’s why “This region stands to bear the brunt and lose the most from the effects of climate change,” as Lyndsey Gilpin, editor of the indispensable website Southerly, points out. Surely the national media won’t be able to turn away from it now.

Margaret Renkl is a contributing opinion writer who covers flora, fauna, politics and culture in the American South. She is the author of the book “Late Migrations: A Natural History of Love and Loss.”