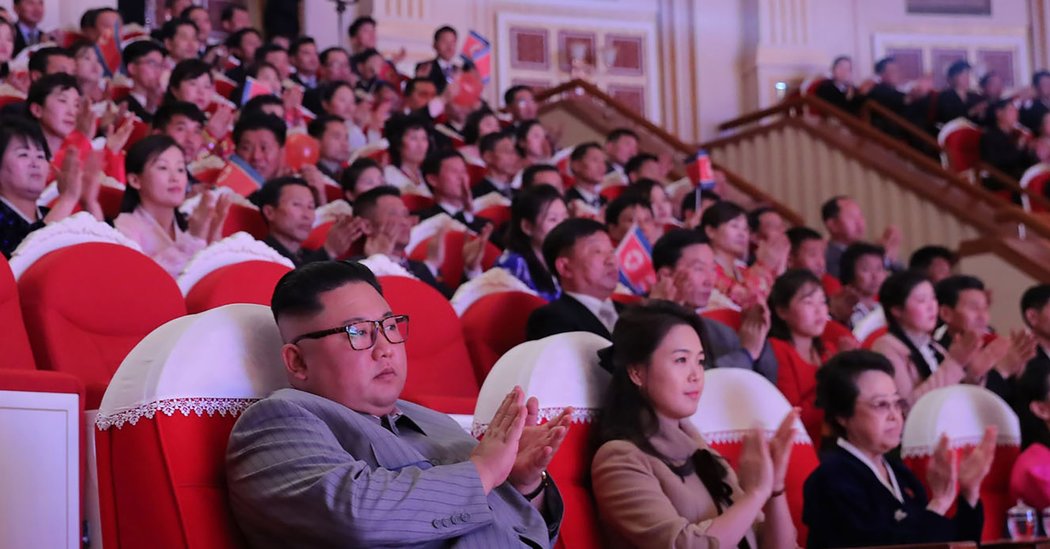 SEOUL, South Korea — The aunt of North Korea’s leader, Kim Jong-un, has re-emerged in Pyongyang, the capital, the country’s media said on Sunday, dispelling rumors that she was purged after her powerful husband was executed on charges of plotting a coup to topple Mr. Kim in 2013.

North Korea’s state-run media said Kim Kyong-hui, the only sister of Mr. Kim’s father, Kim Jong-il, accompanied Kim Jong-un to an orchestra performance on Saturday for Lunar New Year’s Day. Photos released in state media showed Ms. Kim dressed in black and sitting with Mr. Kim, his wife, his sister and other top leaders in the front row at a theater in Pyongyang.

The fate of Kim Kyong-hui has been a subject of intense speculation since her husband, Jang Song-thaek, once considered the second most powerful man in Pyongyang, was executed in 2013. North Korean media last mentioned her name a few days after her husband’s execution when she was appointed to a committee for the state funeral of another top party official.

She then disappeared from public view completely, setting off rumors that she may have been executed, too. South Korean intelligence officials have dismissed such rumors, saying that she had been hospitalized for poor health but not purged.

Ms. Kim remains the closest blood link that Mr. Kim has to his father and paternal grandfather, both of whom ruled North Korea before him.

Mr. Kim’s grandfather, Kim Il-sung, the founder of North Korea, is still revered like a god among North Koreans. Mr. Kim, the current leader, often stresses his bloodline when he needs to legitimize his rule or wants to consolidate his people around him in the face of an external crisis. The public appearance of Ms. Kim, a daughter of Kim Il-sung, reminds North Koreans of that blood link.

Mr. Kim now needs his people’s loyalty more than ever. After a year and a half of largely fruitless diplomacy with President Trump, Mr. Kim said late last month that his country would no longer hope for a diplomatic breakthrough with Washington. Instead, he said his country should prepare to endure international sanctions by tightening its belt and building a “self-reliant” economy.

Until her husband, Mr. Jang, was executed, Ms. Kim had been the pre-eminent female face of the Kim family, which has ruled North Korea since its founding seven decades ago.

Mr. Kim’s father, Kim Jong-il, allowed his sister to hold key jobs in his government. But the diminutive, frail and reportedly sick sister seldom appeared in public during her brother’s rule.

But that changed after Kim Jong-il fell ill with a stroke in 2008. She and her husband raised their public profile, assuming more titles, and acted as parent-like figures while Kim Jong-un was groomed as heir apparent. After Kim Jong-il died, the couple further strengthened their power as they helped Kim Jong-un engineer purges of top officials to establish himself as supreme leader and continue the family dynasty.

Mr. Jang’s power became so expansive through the military and other key branches of the government that Mr. Kim felt threatened.

Mr. Kim had him executed on charges of corruption, sedition and numerous other criminal charges in late 2013. He also ferreted out those close to Mr. Jang, who was accused of building a network of followers in the ruling Workers’ Party of Korea, the government and the Korean People’s Army.

The executions of Mr. Jang and his followers were watershed moments for Mr. Kim’s efforts to establish himself as a monolithic leader. In 2017, North Korean agents plotted the assassination of Kim Jong-nam, Mr. Kim’s estranged half brother, in Malaysia. Mr. Kim may have regarded Kim Jong-nam, the eldest son of his father, as a potential threat to his throne at the family-run regime, analysts say.

After Kim Kyong-hui disappeared from public view, Kim Jong-un’s sister, Kim Yo-jong, and his wife, Ri Sol-ju, replaced her as the main female face of the family.

It remained unclear whether, Kim Kyong-hui, 73, will resume an active public life. In North Korea, invitations to leadership gatherings — and how close people are placed to Mr. Kim — are often barometers of whether an official is favored in the government.

Before rumors emerged that she had been purged, her presence had been a powerful reminder to top generals of where the root of the regime lay, and she was even seen as a regent helping guide her nephew through the North’s treacherous internal politics to ensure a smooth generational change in her family’s dynasty. The offspring of those who fought to help Kim Il-sung establish himself as top leader form the loyalist core of the elite in Pyongyang today.

But Ms. Kim’s relationship with her husband had always been a subject of speculation. Even before Mr. Jang’s downfall, analysts in South Korea had speculated that the couple had a troubled marriage, especially after their only child, a daughter, committed suicide in France in 2006. In a party meeting in 2013 that condemned Mr. Jang as a traitor, he was called a depraved and corrupt womanizer.